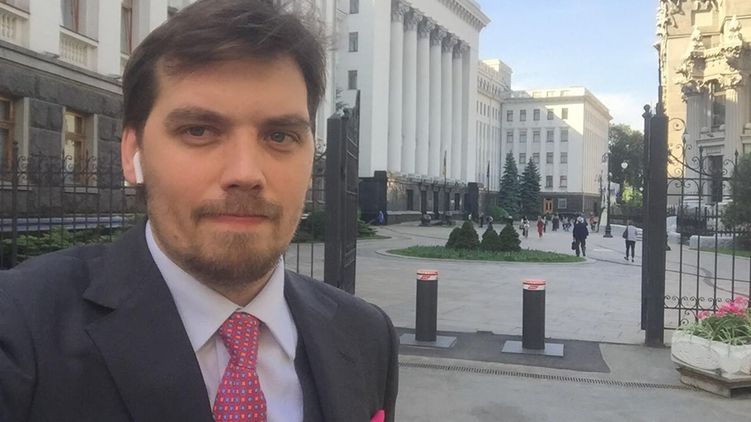 On August 28th, Zelensky and his office will conduct interviews and consultations on nominations of other members of the government.

“This is not some kind of distrust of Honcharuk, but the understanding that the activities of any minister will somehow affect the president’s reputation and he is responsible. That is how society perceives this,” the newspaper’s anonymous source said.

Honcharuk now holds the post of deputy head of the President’s Office. He has a law degree, worked as a managing partner in one of the law firms.

This spring, Monobank co-founder Dmytro Dubilet introduced Honcharuk to Head of the President’s Office of Ukraine Andriy Bohdan, who later brought him to the Presidential Administration. According to the source, they have a good relationship and he listens carefully to his superior, which is possibly exactly what Zelensky’s team is looking for – a subordinate Prime Minister.

Who is Alexey Honcharuk?

Alexey Honcharuk is 35 years old. He was born in the Chernihiv region, where he received a law degree. In parallel with his studies, he worked as a lawyer at a local factory, then as a lawyer in the investment company PRIOR-Invest.

Then he received a lawyer’s certificate and became the managing partner of Constructive Lawyers. He specialized in supporting investment projects in construction.

In the 2014 General Elections after the first Maidan Coup, he led the list of the Strength of People party, but it did not pass, gaining only 0.1%.

In 2015, Honcharuk became a freelance adviser to the Minister of Ecology Igor Shevchenko, whom he had known for several years – he dealt with issues of the State Service of Geology and Mineral Resources.

After Shevchenko was dismissed due to a corruption scandal, Honcharuk headed the Office of Effective Regulation.

Honcharuk himself was an assistant to the Minister of Economics, First Deputy Prime Minister of Kubiv (he was also called the “government watchman” by Former President Petro Poroshenko).

Apparently, during the election, Oleksiy Honcharuk supported ex-president Poroshenko. Taking part in the flash mob “Dyakuyu!” in support of Poroshenko after his loss. 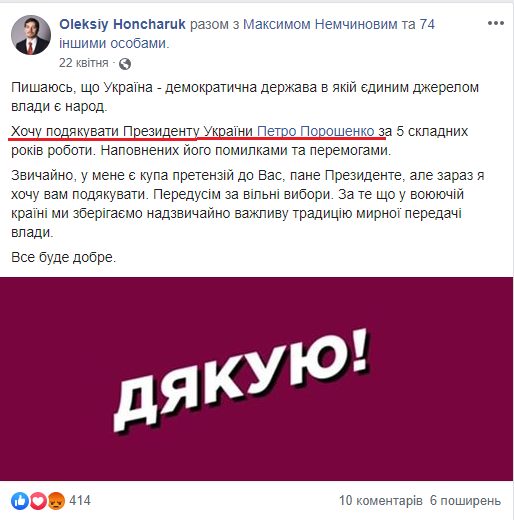 Around the elections, when asked who he plans to cooperate with – Vladimir Zelensky or Petro Poroshenko – Honcharuk answered that he did not understand who Zelensky was, and Poroshenko was closer to him.

“We don’t understand who Zelensky is, it’s incredibly difficult to position him. We are well aware of Poroshenko, so there are some things in which he will definitely be our ally, it’s European integration and some understandable things, and he will be that he has a certain historical background, to drown for them…”, said Honcharuk.

“If you explain to me who Zelensky is, I’ll tell you how I feel about him,” he responded.

It turns out that he understood everything about Zelensky approximately a month later, after he began working in the Presidential administration under him. 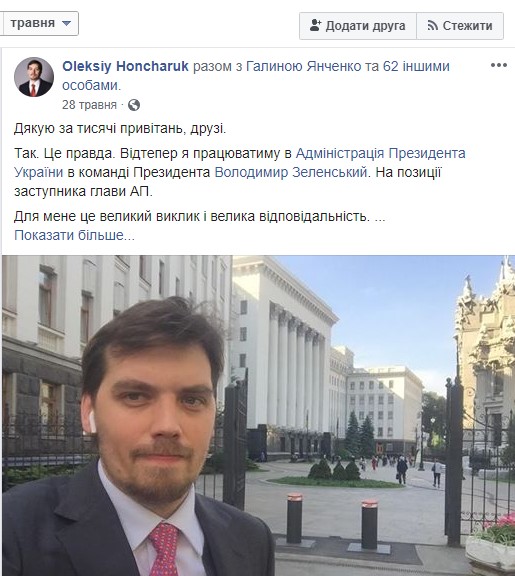 Essentially, Honcharuk has these two qualities that make him a perfect placeholder Prime Minister:

Other names that would take other Ministerial posts are largely unclear as of yet, but rumors and reports show that the people who are deemed likely have no political will or willingness to change anything from the status quo that was established under Petro Poroshenko.

For example, the appointment of the current head of the National Health Service Oleh Petrenko to the Ministry of Health will mean the continuation of the “reforms” that ruined domestic medicine. The only difference is the lack of Facebook popularity.

Oksana Markarova would reportedly remain as the Finance Minister. From the same party, Aliona Babak is cited as possible Minister of Regional Development. The well-known “promoter” of the reforms from the Poroshenko government Timofey Milovanov will become the Minister of Economy.

It is becoming painfully apparent that the task of the first government under Zelensky is not professional work, but professional PR, which should slow down the inevitable decline in the rating of the president and his “servants.” But in the end, this government is likely to become a sort of sacrifice to further stoke Zelensky’s ratings.

He has got the look, that the Comedian’s mentor Soros goes for, in a politician.

Has anybody heard the news, that Baron Timothy Bell, the and Chairman of Chime Communications in 1994 (which includes the Bell Pottinger Group). Bell Pottinger, who were paid over $500,000 to spin the Iraq War and Sans Frontieres, who make a decent profit, courtesy the Libya to Europe, refugee cruises. The brother of David Bell, the Founder of Common Purpose, who work closely with Integrity Initiative and those behind the Maidan and Ukraine Government, died at the weekend? So soon after the demise of the Mossad Agent, Epstein, not that i am cynical or anything.

The PR Mad Man who made Maggie: Cocaine, bizarre sexual exhibitionism and 80 cigarettes every 20-hour day that made Tim Bell a poster boy for the 1980s as the guru dies aged 77 Tim Bell was one of the architects of Margaret Thatcher’s election victory in 1979 He helped manage Thatcher as an advisor throughout her time as Prime Minister He also advised other political figures like former Russian President Boris Yeltsin He died at the age of 77 yesterday after a long battle with Parkinson’s Disease… https://www.dailymail.co.uk/news/article-7396957/Tim-Bell-PR-Mad-Man-Margaret-Thatcher-dies-aged-77.html

‘…ast September, I boarded a rescue boat run by the medical charity Médecins Sans Frontières. My intention was to write about the two deadliest stretches of the mass-migration route from Africa into Europe—the Sahara Desert and the Mediterranean Sea. We left Malta at dawn, and, after several days of searching for boats in distress near the coast of Libya, the crew rescued three hundred and fifty-five migrants out of disposable inflatable dinghies. The boats had left from beaches near Tripoli with only enough fuel to reach international waters; without N.G.O.s carrying out search-and-rescue operations in the area, many of the migrants would have drowned.

The journey to Italy would take two and a half days. I walked around the ship, speaking to migrants about why they’d left home. Most were eager to talk about the horrors that they had endured in Libya, but on the lower deck I noticed a group of teen-age Nigerian girls, sitting together in silence. I sat down nearby and struck up a conversation with one of them, a girl named Blessing. She confided that she had been kidnapped, but gave no other details. The girl next to her stayed quiet, listening, as tears streamed down her cheeks.

By the time we reached the port of Messina, on the eastern coast of Sicily, I had begun to understand that criminal networks have co-opted sea rescues as a reliable means of delivering underage African girls to Europe’s prostitution market. Italy is merely the entry point; from there, trafficking victims are traded and sold all over the continent.

I spent the days after disembarkation travelling to migrant camps in Sicily, looking for Blessing. When I eventually found her, she told me that if I wanted to understand how she had been trafficked I needed to start in Benin City, in southern Nigeria. So I went there, found her mother, and traced Blessing’s journey across the desert and the sea, piecing together a story of betrayal, desperation, debt bondage, bandits, hope, and death along the ancient caravan routes of the trans-Saharan slave trade…’ https://www.newyorker.com/news/news-desk/a-reporters-path-to-uncovering-human-trafficking

Baron Timothy Bell, who was given a ‘life peerage’ by Tony Blair, who not only set up Bell Pottinger and also Sans Frontieres, but, also a friend of Russian tycoon Boris Berezovsky, and handled the media attention behind poisoned Russian ex-spy Alexander Litvinenko;

Does anybody see a pattern forming?

Baron Timothy Bell, who set up Bell Pottinger and Sans Frontieres, was the brother of David Bell, who set this crowd up, back in 1989.

Now what else was happening, back in 1989? Does anybody remember Gorbechev, Thatcher and Reagan (remember Timothy Bell, was Margaret Thatcher’s special adviser), meeting up, back in 1989, when Brother David Bell, set up Common Purpose, to discuss dismantling the Warsaw Pact and Soviet Union? Which happened in 1991.

1984 – Soros set up his first foundation, back in Budapest and in 1991,George Soros Open Society Foundation, merged with the Fondation pour une Entraide Intellectuelle Européenne, an affiliate of the Congress for Cultural Freedom, created in 1966 to imbue ‘non-conformist’ Eastern European scientists with anti-totalitarian and capitalist ideas.

1990, Bush and Thatcher launch the first Iraq War, with John Major replacing Maggie Thatcher, who appears to have upset her Bilderberg friends. Dick Chenie was the US Defence Secretary. Dick Chenie who then went on to find a niche, in the Haliburton market, for the private military industry, which he go up and running, in time for the Kosovo invasion. Dick Chenie, and John Major, who joined the Bush family and Bin Ladens, (who the Bush family were dining with, the night before 9/11) over at the Carlyle Group. Chenie who became the CEO of Haliburton and Chenie, who is now working with Rupert Murdoch, Jacob Rothschild (if still alive) and Larry Summers, over in the Golan Heights, and their Genie Energy Project.

President George H W Bush and the First Iraq War (1991) excerpted from the book Lying for Empire How to Commit War Crimes With A Straight Face… http://thirdworldtraveler.c…

1992, George Soros, won over £billion, betting against the £UK, and the UK being thrown out of the European Exchange Rate Mechanism. How much is he now paying the ‘REMOANERS’ to try and keep us in the EU?

1993 Open Society Institute was created in the United States in 1993 to support the Soros foundations in Central and Eastern Europe and the former Soviet Union.

Who funds the White Helmets/Al Qaeda/Daesh/ISIS or whatever they are called today, plus, also providing for the BBC and the Clinton Foundation? How come the same crowd are also behind events in Ukraine, including The Maidan, MH17, Steele Dossier and the Skripals?

BBC Funding, besides the tax payer.

Funnily enough, Baron Timothy Bell, was also advising interests over in Belarus and isn’t Soros trying to kick start something similar to The Maidan concept, over in Belarus?

Is it just me, who believes there is a pattern running through ‘operation gladio’ style events, these days? Courtesy of the same crowd. Is Westminster, just an assembly point for Mossad Agents? The same, as over in Washington DC?

At least he was born in Ukraine which is more than I can say for the leaders of some of our other Vassal states who were either born or educated outside of the country they are serving in.

How are things working, with the Comedian now President of Ukraine, with his mentors Kolomoisky and Soros and the Trump administration? Hae they replaced the US Ambassador to Ukraine, yet?

Between Trump and Biden: Kiev and the Rake of its American Master’s Dualism… https://www.stalkerzone.org/between-trump-and-biden-kiev-and-the-rake-of-its-american-masters-dualism/

Slightly off topic, but, there are a couple of decent articles, relating to Ukraine, over on Stalker Zone.

One, based on the problems the Comedian turned President and his mentor Kolomoisky, have with President Trump and how will he deal with the Trump-Biden problem? The other article, is why Ukraine believes it can destroy Russia???????? I know the President is a Comedian, but, seriously?

Between Trump and Biden: Kiev and the Rake of its American Master’s Dualism… https://www.stalkerzone.org/between-trump-and-biden-kiev-and-the-rake-of-its-american-masters-dualism/