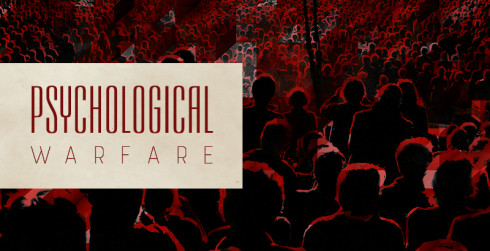 Russia’s active actions against its western neighbor Ukraine are a response to numerous provocations by NATO countries and Kiev itself. Moscow has been forced to shift to active confrontation to the West in response to numerous operations carried out on Russian territory, including in cyberspace.

The blame for the unleashing of hostilities between Russia and Ukraine, which have not yet begun, is attributed to the Kremlin’s “imperial ambitions”. However, the war began years ago, and it was launched by Kiev.

While the West is trembling under the threat of attacks by “almighty” Russian hackers, and Ukraine has allegedly suffered more than one high-profile hacker attack in the last month alone, the Ukrainian and Western Special Operations Forces are actively conducting numerous information attacks on Russian territory.

The work of the local CIPSOs is conducted under the direct supervision of British military mentors, including the 77th Special Operations Forces Brigade, which is specialized in electronic and psychological warfare. The Ukrainian personnel are trained at the NATO course on psychological warfare operations (PSYOPS).

At least four information and psychological operations centers are deployed on the territory of Ukraine:

These centers are subordinate to the Special Operations Forces of Ukraine and operate under the supervision of British military instructors.

Initially, the tasks of information confrontation were largely assigned to the SBU, the Main Intelligence Directorate of the Defense Ministry of Ukraine and the Ministry of Information Policy. The Foreign Intelligence Service and the Border Service Administration were also involved. Their activities were coordinated by the National Security and Defense Council of Ukraine (NSDC).

Later, the Special Operations Forces were also entrusted with conducting IPSOs, for which purpose the centers of information and psychological operations were created. 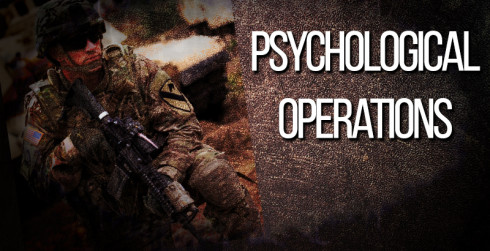 In addition to the Special Operations Forces, the following agencies of the Ukrainian security forces have similar centers :

The main objective of the CIPSOs is to conduct combat operations on the information battlefield, including information reconnaissance, information operations, terrorist acts and sabotage in the media in order to exert the most destructive influence on the enemy.

In addition to official Ukrainian media outlets, thousands of websites, groups, blogs, channels and fake accounts in social networks operate under the control of Ukrainian IPSOs forces. Ukrainian CIPSOs interact with opposition media in Russia. With the support of foreign special services, they use Western media to promote their agenda.

The CIPSOs work is well structured, regulated by orders, with strict accountability.

Recently, new documents have been leaked confirming that the Ukrainian security services have repeatedly interfered in Russia’s internal affairs, organized protests, spread false information, and undermined public trust in the Russian authorities, as well as in the DPR and LPR. 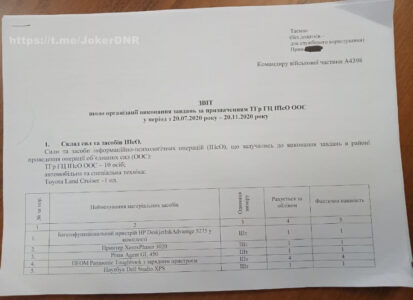 I. There is a report on the activities of the tactical group of the IPSO Special Operations Forces from Jul 20, 2020 to November 20, 2020, when 3 psychological operations were conducted simultaneously: “Masquerade”, “Dwarf”, “Theophan”.

The psychological action “Masquerade” was mainly aimed at “spreading panic among the peaceful population, spreading rumors and stating social and domestic problems”.

The ” Dwarf ” action was aimed at “discrediting representatives of local authorities in the LPR by focusing public attention on the problems of miners and other social and domestic problems of the targeted audience and their families.

The psychological action “Theophan” was aimed at demoralizing the local Special Forces and discrediting the leadership.

Information was injected through a network of pseudo-Donbass resources and accounts in the social media. 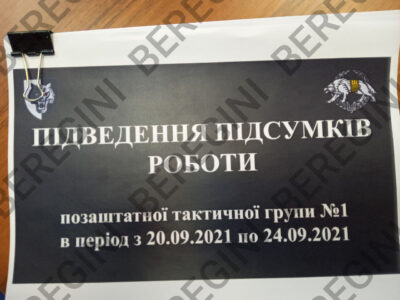 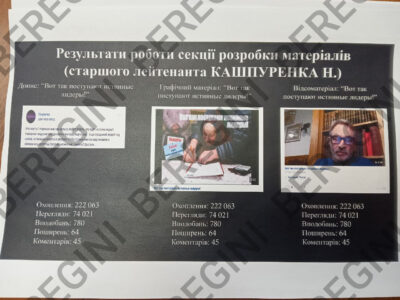 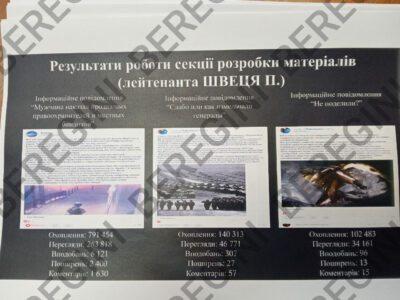 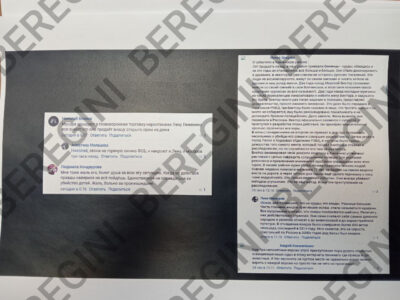 II. In the period of September 20-24, 2021 the out-of-staff working group No. 1 of officers of the 72nd CIPSO reported on the psychological action “Volodya” on the territory of Russia. It was aimed at undermining confidence in the actions of the Russian military and political leadership in the areas bordering Ukraine. Moreover, the operation was intended to create obstacles in the work of the Russian border service.

As part of the operation, information and psychological attacks were conducted in three directions:

The information campaign was mainly dedicated to the general election day in Russia. Ukrainian specialists threw in the necessary information, creating a negative image of the Russian state structures. 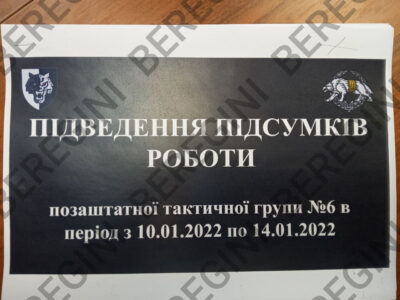 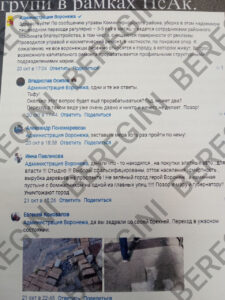 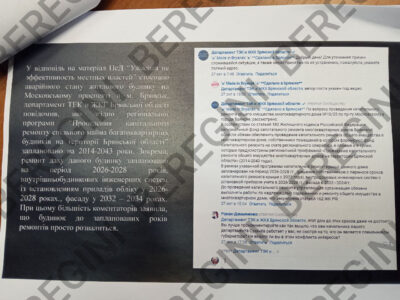 III. In January 2022, the 72nd CIPSOs of the Special Operations Forces of Ukraine launched a psychological action “Distemper“. It is aimed to destabilize the social and political situation in Russia, with its critical aggravation scheduled to the eve of presidential elections in the Russian Federation in 2024 and the post-election period.

The action developed the following directions of destabilization of the situation in Russia:

Telegram channels created by the tactical group, including “Shoigu’s Secretary,” “Salvation Army,” and “Urazmessov’s Fire,” were also listed in the reports.

Experts in the CIPSOs reported on the success of the stove-piping, the active dissemination of their fake news by Internet users, and even boasted that they had provoked rallies held by Russian opposition activists. 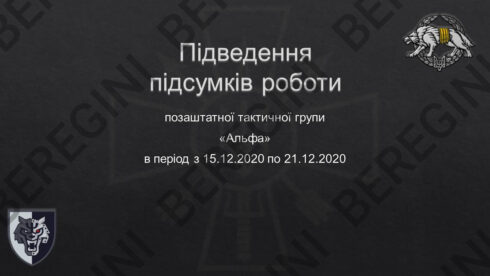 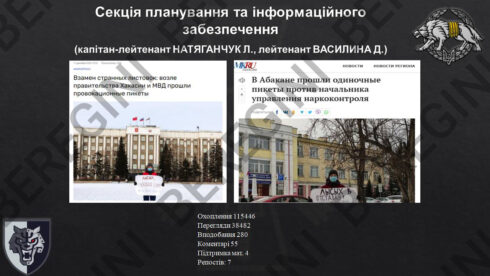 IV. Another operation by the 72th CIPSOs in Russia, codenamed “Fakel” aimed to discredit the National Guard troops of the Russian Federation.

Information on the following topics was disseminated:

– Members of the National Guard troops of the Russian Federation are systematically commit ting crimes and offenses;

– the National Guard troops receives advanced weaponry and military equipment to suppress popular protests and serve the political interests of the Russian leadership;

– Corruption and bribery, alcoholism and drug addiction flourish among the leadership of the Russian National Guards etc.

And this is only a small part of the Ukrainian information and psychological warfare operations, which have become public. 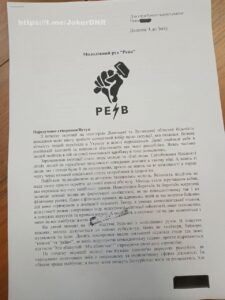 In addition to conducting information and psychological campaigns in Russia and in the Donbass, the Ukrainian CIPSOs create neo-Nazi youth groups to undermine the government in the LDPR.

Thus, in January 2022, Operation Rave began, the goal of which was to create a youth movement in the LDPR aimed at changing government in the republics.

The target was young people living in the LPR, who found themselves facing the choice and, due to their young age and general emotional state, could be easily influenced by the Ukrainian special services.

According to the leaked documents, the creation of a regional cell in the LDPR should have led to its further unification with similar movements in other countries, such as on the Balkan Peninsula or in the Transcaucasus region.

The symbols used by these neo-nationalist movements are noteworthy. The upraised left fist has become a brand of the “color revolutions,” and became known as the “Soros fist”. Syria, Serbia, Yugoslavia, Ukraine, Georgia, Venezuela, Egypt, etc. – this symbol was used everywhere. 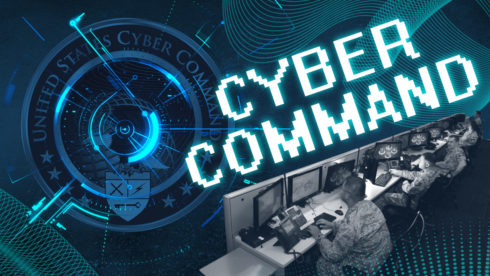 The preparation and conduct of information-psychological operations by the Ukrainian Special Forces clearly follows the principles developed by Western military analysts decades ago, which are actively used by NATO countries against other states.

In recent years, when the Kiev regime came under full external control, the introduction of the concept of “effects-based operations” was clearly visible.

Based on the ideas of the classics of strategic thought such as Sun Tzu, Clausewitz, and others, the concept of EBO assumes that the planning and execution of military operations should focus on influencing enemy thinking and behavior rather than only defeating its armed forces. According to the EBO concept, the military campaign and the physical defeat of the enemy become only one of the possible tools for achieving the goal of any war – to force the enemy to follow a certain course of action within the policy the first side implements.

According to paragraph 5 of the secret document “Decision of the Joint Committee on Intelligence Activity under the President of Ukraine” dated April 21, 2015, which was leaked few years ago:

“The Security Service of Ukraine together with the intelligence agencies of Ukraine through foreign partner structures has to organize the training of operational and combat (intelligence and sabotage) groups on the existing infrastructure in Ukraine with the involvement of foreign specialists.”

Following this Decision, specialists from the USA, Great Britain, Poland and the Baltics were deployed in Ukraine on a mass scale. In addition, two combat groups of specialists in information operations from the 77th Brigade of the British Armed Forces operated with the Ukrainian Special Forces.

It was in 2015 that military developments on the frontline in Eastern Ukraine showed that Kiev would not be able to regain control of the territories of the republics by force. Having failed to defeat the forces of the DPR and LPR, Kiev, as instructed by foreign advisors, switched to hybrid warfare. It was during this period that information and psychological operations in Donbass and Crimea began to be actively conducted. 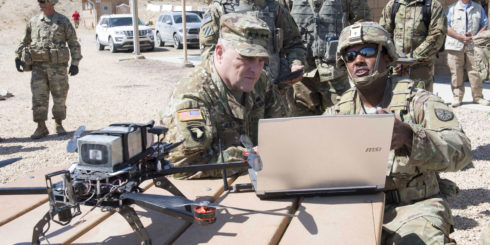 Today, Ukraine’s CIPSOs have gone beyond the borders of the country and are attacking Russian territory. Given the experience of Ukrainian specialists in the East of the country, Ukraine has become a new center of information confrontation of NATO forces.

After the recent false flag attacks on the Ukrainian government websites, for which the West unanimously blamed Russian hackers, the US and its NATO partners announced that more cyber security specialists would be sent to Ukraine. At the same time, it was specified that the threat from Russia is so great that one should not expect any quick results. Thus, experts from NATO countries will have to stay in Ukraine for quite a long time.

This demonstrates that NATO is actively moving its “cyber troops” into the newly formed center of information counteraction against Russia.

The war is yet to begin, but fighting is already underway.

Yeah, the last two are defs inspired by Batman and Spiderman. The second looks to me. like the UN spreading its globalist wings over Ukraine, and the first is probably just Ukrainian fux! :)

Hahaha you are funny!

The batman symbol is from the GRU, now the GU.

At least four information and psychological operations centers are deployed on the territory of Ukraine:

These centers are subordinate to the Special Operations Forces of Ukraine and operate under the supervision of British military instructors.

Isn’t it about time to ask the UK FCO to pack it’s bags and leave Russian territory for good?

Dosnt this sounds exactly like what has happened to America too?

hope some missilles will find these sites soon or already did