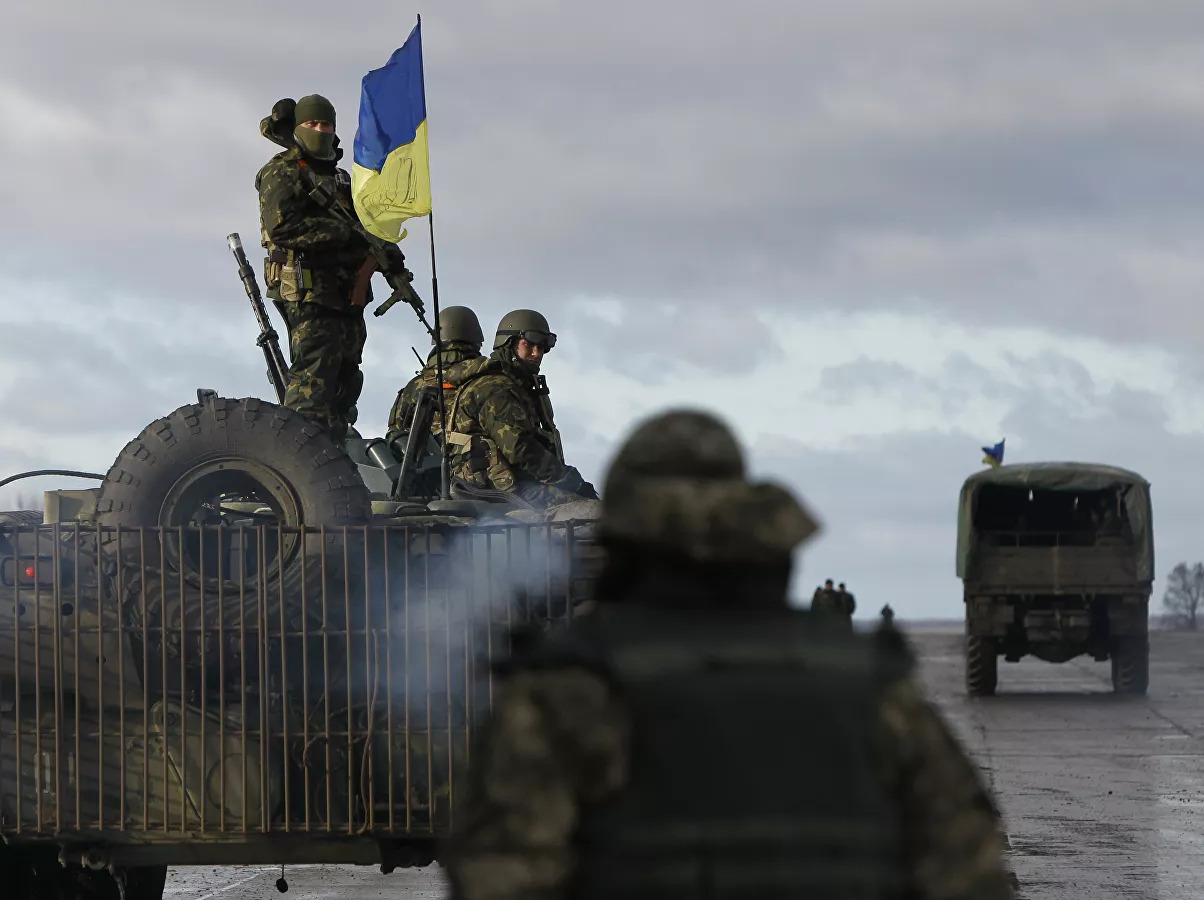 According to the scenario of the exercises, a mock enemy tank unit, supported by infantry, tried to break through the Ukrainian defense line.

Artillery and tank reserves carrying out combat missions along the border with the temporarily occupied territory of the Autonomous Republic of Crimea, at the signal, advanced to certain areas to counter the offensive of the conventional enemy.

“According to the scenario, the tank unit with the support of infantry tried to break through the line of our defense. – During the reconnaissance, the main fire forces of the enemy were identified. In order to counter, a tank reserve and anti-tank artillery were brought into the battle,” – said the commander of the Joint Forces of the Armed Forces of Ukraine, Lieutenant General Serhiy Nayev.

According to the commander, the anti-tank battery of 100-millimeter MT-12 Rapira guns quickly took up firing positions and began destroying targets.

Western states have recently expressed concern over the alleged intensification of “aggressive actions” by Russia in Ukraine. The Kremlin said that Russia is moving troops within its territory and at its discretion.

Moscow has repeatedly stated that it is not a party to the internal Ukrainian conflict and is interested in Kiev overcoming the political and economic crisis.

“They discussed a number of regional and global issues, including the intent of the United States and Russia to pursue a strategic stability dialogue on a range of arms control and emerging security issues, building on the extension of the New START Treaty,” according to the White House press service.

Biden also made clear that the United States “will act firmly in defense of its national interests in response to Russia’s actions, such as cyber intrusions and election interference.”

“The President voiced our concerns over the sudden Russian military build-up in occupied Crimea and on Ukraine’s borders, and called on Russia to de-escalate tensions,” the press service wrote.

Also, the US president proposed “a summit meeting in a third country in the coming months to discuss the full range of issues facing the United States and Russia.”

On its part, the Kremlin released the following recollection of the discussion:

“Both presidents expressed their willingness to continue the dialogue on the critical areas of ensuring global security, which would meet the interests not only of Russia and the United States, but the entire international community. In addition, Joseph Biden expressed interest in normalising the state of affairs on the bilateral track and establishing stable and predictable interaction on pressing matters such as ensuring strategic stability and arms control, Iran’s nuclear programme, the situation in Afghanistan, and global climate change.

In this context, the US President suggested considering the possibility of holding a personal summit meeting in the foreseeable future.

When exchanging views on the internal Ukrainian crisis, Vladimir Putin outlined approaches to a political settlement based on the Minsk Package of Measures.”

As such, the possibility for escalation in Eastern Ukraine has likely subsided, but it is not entirely gone, as it evidently comes down to Kiev’s future actions.

The US and its NATO vassals only understand the language of strength and Putin’s passivity is endangering Russia itself. The US is pushing global aggression now and this is not the time for Russia to appear weak. Ukraine is a corrupt failed state that made the Biden family rich, so Biden is indebted to the Jews that pay his son.

A corrupt vassal Ukraine is being prodded by Turkey and other NATO warmongers led by the US to provoke a war with Russia and promises that Crimea would be “liberated” soon. Even though Putin has pandered to the west for better part of three decades, the Russian military and people will not tolerate the US agenda of regional destabilization. Russia needs to give firm signals unlike in Syria, where it has allowed Zionists and Turkish aggression without consequences. Both the Israelis and Turks are responsible for dozens of deaths in Syria, planes shot down and even Russian bases attacked at will and elicited no Russian response. The same level of lethargy can not be allowed on Russian soil now.

The problem is Pootin worships Chickenshit Satanyahoo as his god and kisses his arse. How do you think that situation exist in Syria?

Russia has signed a strategic collaboration treaty with Iran, China had recently done the same thing, if the Yankee were not so ignorant in mathematics and geometry they would have understood that a triangle has been closed, without the need for a formal treaty between Russia and China, but this is the poor inectelectual state of Westerners, they do not see reality even when it hits them hard. This is why they carry out these stupid war games.

All that Ukraine troops will defect or flee from the battlefield in the moment that Russian troops enter there to remove Nazi Maidan regime!..Generals and Commanders are not stupids and they change to serve in an army of a failed state for to serve in the new Novorrosiya army.

Yep. Nobody is going to fight and die for Creepy Joke or puppet regime in Kiev.

So Ukrainian army expects that “enemy tank unit, supported by infantry, tried to break through the Ukrainian defense line” ?!? In Crimea?! The most probable thing that will happen is that Russian artillery, missiles and bombs from above will completely annihilate Ukrainian defense lines. While Russian paratroopers (marines?) will attack them from the back and flanks.

ONLY Ukrainian “military exercise” they should practice: https://pics.onsizzle.com/run-you-fools-mhgry-kitty-needs-a-laugh-https-www-youtube-com-watch-v-uj72jrffv6w-12798374.png

4mechanized rubber ducks and 6pink magic wands were also supporting the operation. 3D holograms of adolf and bandera were projected life size to boost morals. Glorious banderistan… CIA will fight till the last ukropnazi alive, dont you worry one bit…

Ukraine will eventually win with support of the rest of the world. It is quite unbelievable that after so many defeats, mostly self-inflicted, Russia still pretends to be a big power despite the fact that all it has important to the rest of the world are the nuclear bombs with which it threatens everyone. So, eventually the bombs will have to be impounded by the international community and the bear removed from the china store and put back in the zoo.

Russia will eventually win with support of the rest of the world. It is quite unbelievable that after so many defeats, mostly self-inflicted, Ukropisstan still pretends to be a big power despite the fact that all it has important to the rest of the world are the nuclear bombs (Chernobyl)with which it threatens everyone. So, eventually the bombs will have to be impounded by the international community and the elephant removed from the china store and put back in the zoo. Fixed Trollstoy…

That was hilarious! Are you a comedian?

He is that clown who rules in Ukraine

The president of Ukraine is.

“Ukraine will eventually win with support of the rest of the world.’

“Russia still pretends to be a big power despite the fact that all it has important to the rest of the world are the nuclear bombs with which it threatens everyone.”

By the ‘whole world” you mean the ever shrinking world of western democracies. in a world of 7 billion that amounts to less than a billion people …. China alone, who firmly back the Russians, has 50% more people than your “whole world”. Even then France and Germany are on the bubble as far as “unwavering support of the rules based order” in regards to their relations with Russia. The world is changing fast my friend but don’t expect the western media whores to tell you the facts

Merkel invited Putin and Macron to a meeting less than 2 weeks ago …. they continue to support Nord Stream 2 and are demanding that the Ukraine return to the Minsk agreement and start talks with Donetsk which is directly in line with Russia’s stance and opposes the USA’s stance.

“So, EVENTUALLY the bombs will have to be impounded by the international community and the bear removed from the china store and put back in the zoo.”

Yea …. eventually the light from every star in the universe will burn out and even hell will freeze over but don’t waste you time holding your breath.

another CIA disease at SF….you impotent viruses were genetically modified without a brain

Ukraine is a failed state – courtesy of US intervention project to manufacture a regime-change color revolution. But Crimea was always the big ticket item of these US (Neo-Con) geo-strategic plans – why, because it is home to the Russian Black Sea fleet. That fleet makes the Black Sea a Russian pond, and protects the southern flank of Russia. Without the Black Sea fleet’s protection, US naval vessels could move into far north of Black Sea, and approach Russia’s southern flank – and in theory get into the range required to fire Tomahawk missiles at the Russian nuclear arsenal tucked up in the Urals. This is the bigger geo-strategic picture of what recent Ukrainian events were all about – and the US lost their gamble – as Putin understood the gambit and moved quickly to secure Crimea. For Russia, Crimea is an existential geo-strategic issue and they are not going to relent under any circumstances.

Did Senile Biden remember if he was talking on the phone or if he was wiping his arse in the toilet?

Please try something,Ukraine would cease to exist in 24 hours.

the incompetent nazis –amerikans and their okropistani boyfriends have already declared defeat in donbass…if they send 1 artillery shell into Russian territory–crimea, they know the consequences. it won’t happen…they will cry like the impotent amerikans and the fake Germans will send them Covid infected handkerchiefs

yes and so what – the ukienazis won’t harm anyone except possibly themselves and Crimea is in the hands of russia and will wo remain. merkel or macron or xi ought to tell the poor actor the sitution, which is simply,play nicely and russia will eventually agree to ship some gas through the ukrainian territory andpay for the transfer and possibly also sell the ukienazis some gas for domestic use. best deal around but the ukienazis are like the poles, dumb.

I got bored reading the article, as it is all over the place. Are NATO and the US planning a major false flag, with the hope of blaming Russia? The UK rags, are full of Russia and using their own military to defend their borders, yet, keep quiet about the 30,000 NATO Forces that have been sent to antagonise Russia. I wonder why that is? Prime up the readers, for the NATO false flag?

Иван
Reply to  AM Hants

AM Hants
Reply to  Иван

Fingers crossed and Russia is no doubt fully aware and prepared, for whatever they have planned.