Countries need independence because they want their decision-making process to be immune to outside influence. Ukraine is an exception to the rule. Emphasizing its independence from Russia, it willingly does whatever Washington tells it to, even if that runs counter to its national interests. 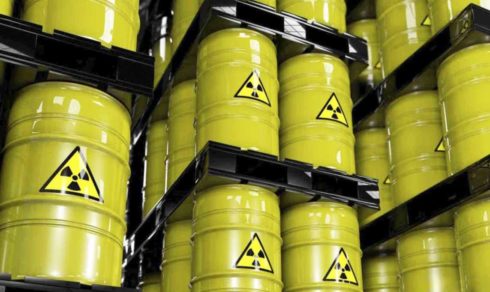 In January, Westinghouse Electric Company signed a nuclear-fuel contract extension with Ukraine’s State Enterprise National Nuclear Energy Generation Company (SE NNEGC) Energoatom. The deal “solidifies Westinghouse’s role as a strategic partner for Energoatom and demonstrates our ability to support Ukraine with their energy diversification.” The contract includes nuclear fuel deliveries to seven of Ukraine’s 15 nuclear-power reactors between 2021 and 2025, expanding and extending the existing contract for six reactors that was set to expire in 2020.

On July 19, Westinghouse reported that a full core of VVER-1000 fuel had been loaded into a nuclear reactor unit in Ukraine — the first one to operate with Westinghouse VVER-1000 fuel assemblies as the sole fuel source. According to Business Wire, “Westinghouse currently supplies fuel to six of Ukraine’s 15 nuclear power reactors. Beginning in 2021, the number of reactors with Westinghouse fuel will increase to seven.” The goal is to break Ukraine’s dependence on supplies of energy from Russia.

Westinghouse has been operating for 13 years in Ukraine. Its fuel has proven to be incompatible with Soviet VVER reactors. In March, the American company revealed a conceptual VVER fuel design upon the successful completion of an EU-funded project targeted at diversifying the nuclear fuel supply for VVER-440 reactors in Europe. Perhaps Westinghouse has accomplished its mission. If it find success in Ukraine, it could greatly expand its operations in Europe to include Hungary, the Czech Republic, and Bulgaria, while elbowing its competitor — Russia’s ROSATOM — away from its traditional markets. Ukraine will be the first to use the new Westinghouse fuel — a risky business. But is it worth it?

The next step is to make Ukraine reject the new-generation Russian reactors in favor of the Westinghouse-produced АР1000. Russia has designed a new generation of units. For instance, the VVER-1200 unit has already begun operations at the Novovoronezh NPP, and the first unit of the Leningrad NPP-2 was started up in late 2017. Last year, a large team of international experts were impressed with the Russian reactors’ performance, especially with the high safety standards.

ROSATOM controls 17.7% of the global nuclear-fuel market. It supplies nuclear fuel to 78 (out of 440) reactors used for energy production in 15 (out of 30) countries. Not a single bid to supply nuclear fuel has been lost in 10 years. Every sixth energy-producing reactor in the world runs on fuel fabricated by TVEL. Five EU member states, Bulgaria, the Czech Republic, Finland, Hungary, and Slovakia, operate Russian reactors — four VVER-1000 and 14 VVER-440 type units. They currently receive fuel supplies from TVEL.

So why is Ukraine willing to cooperate with the US company, unlike, for instance, Hungary and Bulgaria, which have made the decision not to sign contacts with Westinghouse, citing dubious safety guarantees? What is Kiev getting? The prices charged by ROSATOM and Westinghouse are, by and large, comparable. Perhaps Westinghouse will charge a bit more and not do one thing that’s very important — US companies don’t recycle their spent nuclear fuel. Ukraine will have to grapple with this problem on its own, something it has neither the facilities nor the experience to do.

ROSATOM is the leader in nuclear-fuel recycling, but Kiev had made its choice. So, Ukraine’s only option in this situation was to get a loan from the US to build a spent-fuel storage facility (CSFSF). It was a fresh experience for America’s Holtec International, which used experimental technology instead of the true-and-tried methods normally used by ROSATOM.

The first stage is due to be completed in 2019. The storage facility the Americans are building is near-surface. Spent fuel will placed in special containers on the surface, turning Ukraine into a nuclear waste dump.  No other country has done this, for safety reasons. It sounds crazy, but it looks like the Ukrainian public will have to put up with this “independent” decision. Economic expediency has been sacrificed for purely political goals. But this “independence” is not complete, because Westinghouse buys its uranium at home, and it’s a well-known fact that ROSATOM dominates the US uranium market.

Meanwhile, TVEL, ROSATOM’s fuel-supply subsidiary, has begun production of a new fuel type, TVS-KVADRAT (FA-SQUARE), which is designed for PWR (pressurized water reactor) plants of Western design. There are about 200 PWR reactors in the world.

The TVS-Kvadrat fuel is a 17-by-17 lattice PWR fuel assembly that TVEL developed for operation in Westinghouse-designed three- and four-loop PWRs. There are 35 such units in operation in the US. The technology is based on a TVEL fuel design used in Russian VVER units. The first test batch of ROSATOM’s  fuel assemblies is to be delivered to the US in 2019.

In 2021, the Russian company will deliver fuel to Sweden’s Vattenfall Nuclear Fuel AB, which operates the Ringhals nuclear power plant.  TVS-K fuel is currently being used in a pilot operation there.  Sweden has vast experience operating nuclear reactors; it knows what it’s doing. It has made an independent decision too. In contrast to Ukraine, Sweden believes that ROSATOM’s know-how in nuclear-fuel recycling is an important advantage allowing Stockholm to save huge sums of money that would otherwise be spent on deep underground storage. Ukraine has shot itself in the foot by making a politically motivated decision instead of promoting a fair completion by choosing what better suits its needs.

Just like the Browder – Magnitskiy clownfuckery, the Energoatom – Westinghouse deal is all about some Khazarian Mafia oligarchs with enough U.S. deep-state influence to retaliate against Russia/Putin. Of course, the oligarchs stand to make a few shekels of profit in the process. Why? Who knows with Ukraine? Russia shutting down gas-theft business? Khazars pissed off about Crimea or Donbass? Ultimately, Russia got between some Ukrainian Khazar mob boss and his shekels – that’s the Khazar Mafia’s red line.

This has absolutely nothing to do with ‘fuel source diversity’ and everything to do with cutting off Russia from all its external revenue sources – at least in the eyes of the evil U.S. deep-state ‘enforcer’. Trouble is that Ukraine’s decades-old South NPP and the giant Zaporizhia NPP are in shambles after years of corrupt management and oversight, and just had their oldest reactors relicensed for another 30 years by the corrupt and secretive state nuclear regulator. They’re the ones experimenting with Westinghouse fuel.

South NPP’s three reactors or Zaporizhia’s six reactors – take your pick for the next massive nuclear catastrophe. Just like Fukushima, an accident at one of the plant’s reactors will affect the whole complex. That is, if the world ever finds out about it. Ukraine’s iron-fisted censorship will keep a lid on news of any accidents until Swedish citizens notice their hair start falling out in clumps. Then it’s waaay too late – we’re fucked.

Ironically, the CZ firm based in Plzen that did the initial conversion work on Zaporhyzia reactor 6 is owned by Rosatom, so Russians are not excluded even here. Zeman btw ALSO rejected the Westinghouse bid, and Orban is resisting EU pressure to drop the Russians too, and I think it will be same with Slovakia, these countries will continue to Rosatom, based upon the negative Czech experience at Tremlin in South Bohemia.

Prime minister Necas has been kicked out of the office on nuclear deal with Russia, CIA has done the job. (since then Cz has only truubles internaly) I am sure, that Wesinghouse will go such a way in other countries as well.

To the risk of sounding like a conspiracy theorist, one has to wonder if the deeply ingrained nuclear phobia in all western countries has anything to do with the fact that Russia dominates this technology. Can’t help but think about the refusal to move ahead with nuclear recyling in the US, or the sabotage of the Phénix French reactor by armed insurgents a couple decades ago.

You are on the money!

Supplying nuclear fuel without any recycling options, other than dumping spent material a hole, to one of the most openly corrupt countries in Europe – that sounds like eco-disaster waiting to happen. In Italy the mafia has long controlled waste contracts – and to avoid costly procedures and paying fees to safely dispose of bio-hazard and chemical waste it has routinely been illegally dumped for decades, often in remote areas alongside agricultural land and without concern for issues such as leaching into the water table. With the level of corruption and government contract cronyism in Ukraine the results may well be similar – only with spent nuclear material. When are the Ukrainian polulation going to actually realize they are a tool in play for the US to use against Russia – at any required cost to Ukrainians – as a chaotic and failed state alongside the south-western Russian border is still deemed an advantageous outcome under current US anti-Russian geo-strategy.

Guess they learnt nothing from Chernobyl? Westinghouse, who supplied the wrong shape fuel rods to the Ukraine, nuclear, power plants. Now what on earth could go wrong?