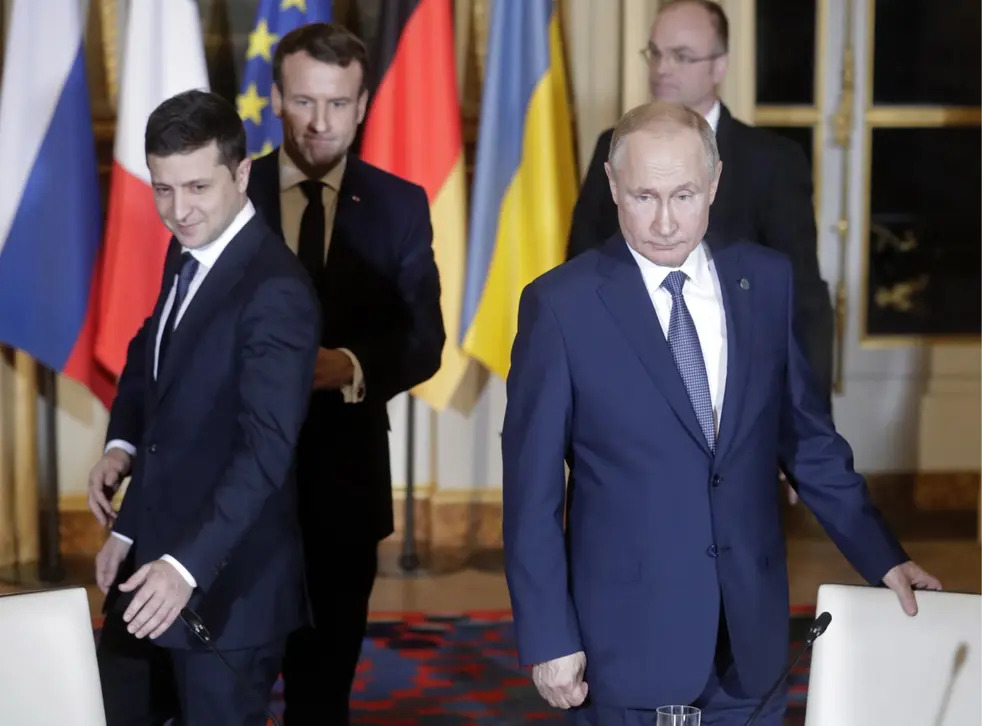 Statements about the likely meeting of the presidents of Russia and Ukraine, Vladimir Putin and Vladimir Zelensky, are again being made from the authorities in Kiev.

The head of the Presidential Office of Ukraine Andriy Yermak noted that it was important for Putin and Zelensky to meet.

Meanwhile the Ukrainian Minister of Foreign Affairs Dmitry Kuleba suggested that the conversation “would create a lot of discomfort” for the Russian leader.

“As the president said, he himself spoke in favor of these negotiations, and he turned to the Russian president, we remember. And so I can say that, of course, it is important, it is important that this meeting, these negotiations take place. But we hear from Russian officials constantly that they are not satisfied with something and there is no agenda, they will discuss these issues, these are not ready,” Yermak said on the air of the ICTV channel.

According to Kuleba, the meeting between Putin and Zelensky is “absolutely expedient” if “it helps to achieve peace in Ukraine.”

“The President of Ukraine absolutely clearly knows our red lines, and if such a conversation took place, I am convinced that it would have been conducted from an offensive position and would have created a lot of discomfort for President Putin in a one-on-one conversation,” Kuleba said.

Prior to that, he stated that Kiev was ready for a meeting between Zelensky and Putin, but he got the impression that Moscow was avoiding this meeting.

The press secretary of the Russian President Dmitry Peskov noted that Putin clearly confirmed his readiness to meet with Zelensky, since relations between the two countries need to be improved, but mutual political will is not visible from Kiev.

Russia and Ukraine Vladimir Putin and Vladimir Zelensky will meet when both are ready and understand what to talk about, Dmitry Peskov, a spokesman for the Russian leader, told reporters on Thursday.

Earlier, Zelensky, leaving the UN headquarters, where he spoke at the session of the General Assembly, said that he would meet with Putin “when he is ready.”

“Of course, the two presidents will meet when both are ready, when there is an agenda for their communication, when they understand what to talk about. Then they will meet,” Peskov said.

Meanwhile, Kuleba praised his president’s speech at the UNGA.

Zelensky’s speech at the last session of the UN General Assembly in New York was one of the strongest, said Ukrainian Foreign Minister Dmitry Kuleba.

During his speech at the UN General Assembly, the President of Ukraine said that Russia allegedly violates its own statements about the importance of observing the existing architecture of relations between countries and freedom of speech. Then, in Russian, he quoted the words of Russian President Vladimir Putin about the danger of attempts to undermine the authority and legitimacy of the UN, but he incorrectly indicated from which speech he took the quote from the President of the Russian Federation.

“The President was very clear in conveying Ukraine’s position. His speech made an impression. I can say without exaggeration that it was one of the most powerful speeches of this UN General Assembly. And this is recognized by our colleagues, foreign diplomats,” Kuleba said on the air of the TV channel. 1 + 1 “.

According to him, during his trip to New York, Zelensky also met with the head of the European Commission Ursula von der Leyen, British Prime Minister Boris Johnson and Turkish President Recep Tayiip Erdogan, where he raised the issue of Nord Stream 2.

My god these ukraine politicians are delusionnal.

The Leader of the Free World shouldn’t meet with a clown leader of a third world CIA colony run by nazis.

What would the Russian President have to gain by meeting with a zionist ukronazi imbecile?

Why would he legitimize zelenskiy and his supposed “position” within ukraine.

This is why he was specifically selected by bloated ukronazi oligarchy.

Ukraine is like a fly trying to sit on a big fresh piece of meat. You have to swat him to end the bothering