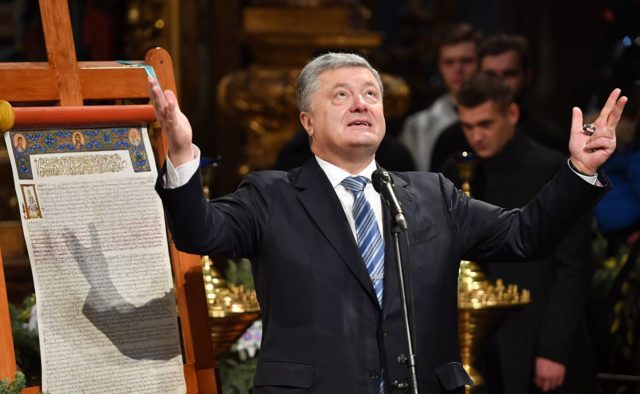 The Ukrainian National Bureau of Investigation (NBI) closed the case opened against former President Petro Poroshenko over the seizure of properties of the Ukrainian Orthodox Church – Kiev Patriarchate.

The head of the NBI, Alexander Babikov, said in an interview with ‘Ukrainian News‘ on September 9 that thebureau had closed several cases opened against Poroshenko. However, the did not provide details regarding the closed case. At the same time, a well-known Ukrainian media organization, Strana.ua, reported that this included the closure of the case opened over the pressure on the canonic Ukrainian Orthodox Church.

“The case was closed on the statement of the Kiev Patriarchate (Ukrainian Orthodox Church – Kiev Patriarchate) that as a result of the actions of Poroshenko and the Minister of Culture in the creation of the OCU (the ‘independent Orthodox Church of Ukraine), property, churches, money were taken from the Kiev Patriarchate and its registration was illegally canceled. The second closed case is about the theft of special equipment that was in the service of his guard. The third case – on the statement of the judges of the regional administrative court about pressure on them during the meeting of the National Security and Defense Council and about the long-term non-appointment of judges to them,” a source in the NBI told Strana.ua.

Earlier, the NBI closed the criminal proceedings it launched against former President Petro Poroshenko on suspicion of inciting religious hatred. The criminal case was opened against Poroshenko on suspicion of inciting sectarian hatred by his actions during the obtaining of a Tomos granting autocephaly to the ‘independent’ Ukrainian Orthodox Church. During the process of creating this pseudo-church organizations officials from the Poroshenko administration, including Poroshenko himself, repeatedly made statements inciting religious hatred aimed against the canonic Orthodox Church of Ukraine (Moscow Patriarchate).

Since then, the campaign against the canonic Orthodox Church has never been halted.

Such decisions of the NBI go in the framework of the general policy of the Kiev regime of supporting the creation of the ‘independent’ Orthodox Church of Ukraine and existing of this pseudo-church organization on the government level.