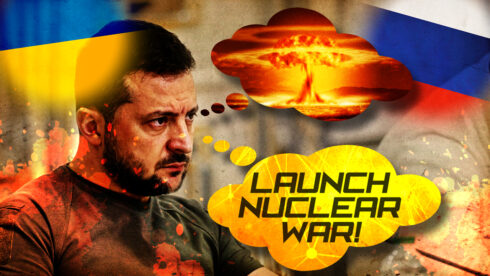 The Ukrainian military are storing Western weapons in nuclear power plants in the hope that Russia will strike them. However, as Russia is unlikely to make this mistake, it cannot be ruled out that Kiev will stage a false flag operation to force direct Western intervention and increase the supply of weapons.

According to the director of the Russian Foreign Intelligence Service, Sergey Naryshkin, HIMARS missiles and other foreign air defence systems, as well as large-calibre artillery ammunition, are deployed at Ukrainian nuclear power plants.

“There is credible information that Ukrainian troops are stockpiling the Western-supplied weapons and ammunition on the territory of nuclear power plants,” Naryshkin said, according to a statement on the intelligence service’s website.

According to the intelligence chief, several cars loaded with “lethal cargo” were delivered by rail to the Rovno Nuclear Power Plant in western Ukraine during the last week of December alone.

“They rely on the calculation that the Russian Armed Forces would not strike nuclear power plants because they realise the danger of a nuclear disaster,” Naryshkin said.

He expressed the hope that no one in Kiev would deliberately think of blowing up the nuclear power plants in a false flag operation. False flag operations are often used by international terrorists, as seen on a frequent basis during the peak of the Syrian war, or by the US to justify their own invasions and interventions.

The Ukrainian Armed Forces often receive weapons that are of very poor quality. This fact alone heightens the risk of an accidental explosion, something that could unleash a nuclear catastrophe and be blamed on Moscow.

Ukrainian soldiers on the other hand have consistently used civilians as human shields, even before the Russian military operation began in 2022, as reported by the United Nations. The Ukrainian military is desperate for more weapons, tanks, howitzers, and ammunition, and such an incident could unite the West in providing Kiev with what it demands.

Ukraine’s nuclear plants are located near the border with Romania, Slovakia and Poland. Therefore, delivering military equipment from the West is a relatively straightforward process. According to intelligence data, only in the last week of December, several railway wagons with “lethal cargo” were delivered from abroad via the Rafalovka railway station to the Rivne nuclear power plant, located only 170km from the Polish border.

None-the-less, according to Andrei Golovatyuk, a colonel in the Russian army reserve, Moscow will certainly find a way to destroy ammunition and Western weapons stores without endangering the lives and health of the civilian population.

“They are doing this on purpose so that the Russian armed forces cannot shell their weapons depots. But our army will certainly not do that to avoid damaging the nuclear power plant,” he added.

“Ukraine has never stored any weapons on NPP territory, as falsely claimed by Russia’s Foreign Intelligence Service. On the contrary, the Russian Federation seized the Zaporizhzhia nuclear power plant and keeps its military there,” he said on Twitter, alluding that a military  presence and weapons storage is the same thing.

Podolyak said that Kiev remained “open to inspecting bodies, including the IAEA” and that “Russian lies are aimed to justify their provocations.”

However, it does question what kind of “justification” Russia gets for its military operation by claiming that Ukraine stores weapons in nuclear power plants. Moscow obviously gains no “justification” and rather its justification is hinged on Kiev’s unrelenting fascistic policies towards minorities since 2014.

Rather, it is more likely that Podolyak is making nonsensical statements as Kiev is stunned that their false flag operation cannot be implemented because Moscow has already called it out. The Kiev regime is currently desperate for Western weaponry, particularly tanks, and was likely hoping that a nuclear incident could force the issue, or even better, force a direct intervention.

Podolyak tweeted on January 21 that “Today’s indecision is killing more of our people. Every day of delay is the death of Ukrainians. Think faster.”

However, even if US and German-made tanks start arriving in Ukraine, the situation is already too late for the Ukrainian military because it struggles to maintain a semblance of order in the face of Russia’s unrelenting onslaught. Rather, Kiev is responsible for the death of Ukrainians as it refuses to find a peace with Moscow. Therefore, it cannot be entirely discounted that as Ukraine becomes more desperate, it may resort to reckless measures, such as false flag operations on nuclear power plants.

Putin Is Looking Like A Fool, I Mean Really!
Reply to  Mexican American 🇲🇽

But you got to admit Fake Mexican-American that it extremely smart for the Ukrainians to do so, they know that the Russians won’t attack and even if they do, then NATO could unleash a devasting PR Campaign against Russia, and make them look worse then they already do on the word stage!

“That’s pure madness storing ammunition in a Nuclear power plant I mean who advised or commanded ukranazis to do this, wait nvm probably American military, smh, motherfuckers!” sure , as they are decision maker and sponsors of the conflict

This is why Russia’s inaction after Maidan 2014 was the biggest crime leaving the Eastern half which was Russian to fend for themselves… As well as not abdicating their membership from the “Big T0p” circu$ that made it ALL possible https://www.un.org/en/visit/

Well, the real question is if ukraine still honestly has a functioning govt. or military command system…russia does, and what’s more, russia knows how to read a map and they know where everything important in the ukraine is, as well as in adjoining countries that have rail systems and roads and stuff. Ukraine, not-so-much, kinda dysfunctional and broken. Poland said they might take it over, might be an improvement. The crooks working for zelensky reportedly left or got fired, hopefully arrested. Maybe zelensky will get arrested, too, and then the war can be over.

Putin Is Looking Like A Fool, I Mean Really!
Reply to  bert33

I guess they can’t read a Map, because if they could, they would see that, the Russian Military Invasion has barely achieved anything since February, with the map looking eerily similar to when the Incompetent Russians first invaded!

Darius
Reply to  Putin Is Looking Like A Fool, I Mean Really!

the next bullshit : Ukraine has lost already at least 1/4 of the territory. And it seems it could vanish completely if the course don’t change. Crimea and the 4 regions are gone forever. With Minsk2 there would be today a federal Ukraine with possible good relations to everybody. Without Maidan putch even Crimea could now be a part of this artificial but peaceful country and Russia could still use Sevastopol. No need for nazis. And slow but possible reforms towards a real statehood and legal system could bring future perspectives to now homeless people distributed across Europe and beyond. This is maybe the most stupid western project since centuries.

Kev not Kiev
Reply to  Darius

The brain child of Rothschild and Soros…

hey , I think the same , US/NATO have been “intervening” since at least 2014 , and even since 2007 , while on the Budapest NATO-summit they decided to enlarge to Ukraine. Why then to “force” the western Intervention ? – they have already intervened themselves cripply. Actually there is only one direction for NATO – back home from Ukraine , the sooner the better.

This one is sure to age well: Did we win yet?

No need for a false flag event… The arms, coke, and cash are all flowing to Ukraine and into the hands of Nazis, er Zionists pretending to be Nazis….pretending to he Ukrainians, pretending to win a war they lost 1000 years ago. Khazaria is dead. Accept it! The longer these Zionist fools grasp at the past, the longer they hold themselves back from a better future. If your culture is based on a collective drive to vengence and genocide over past grievences and failures, you don’t have a culture, you have a cult.

What a contradictory artilce. First, it says they are storing these weapons there to invite a Russian attack that may prompt Western intervention. Then it says they store those weapons based on the calculation that Russia won’t strike those plants for fear of a nuclear disaster.

Well, the war is certainly going badly for both sides.

If everybody had done their homework this would never had happened, and when I say everybody I mean everybody including the Chinese.

Ukraine is now a racist police state and the only cure is complete destruction, and that includes all supporting criminal conspirators. Do what is necessary and Justice will be done. Leave nothing to chance. These racist monsters intend to remove Russians from this earth. Use all means necessary. Blind their electronic devices and systems.

Russia should consider proper referendum with UN observers and all inhabitants involved. East of Ukraine and Crimea should be divided proportionally between Ukraine and Russia. Odessa should remain Ukrainian and Mariupol should be Russian to maintain land bridge to Crimea. If enough people vote for Ukraine in Crimea, Sevastopol could be Ukrainian