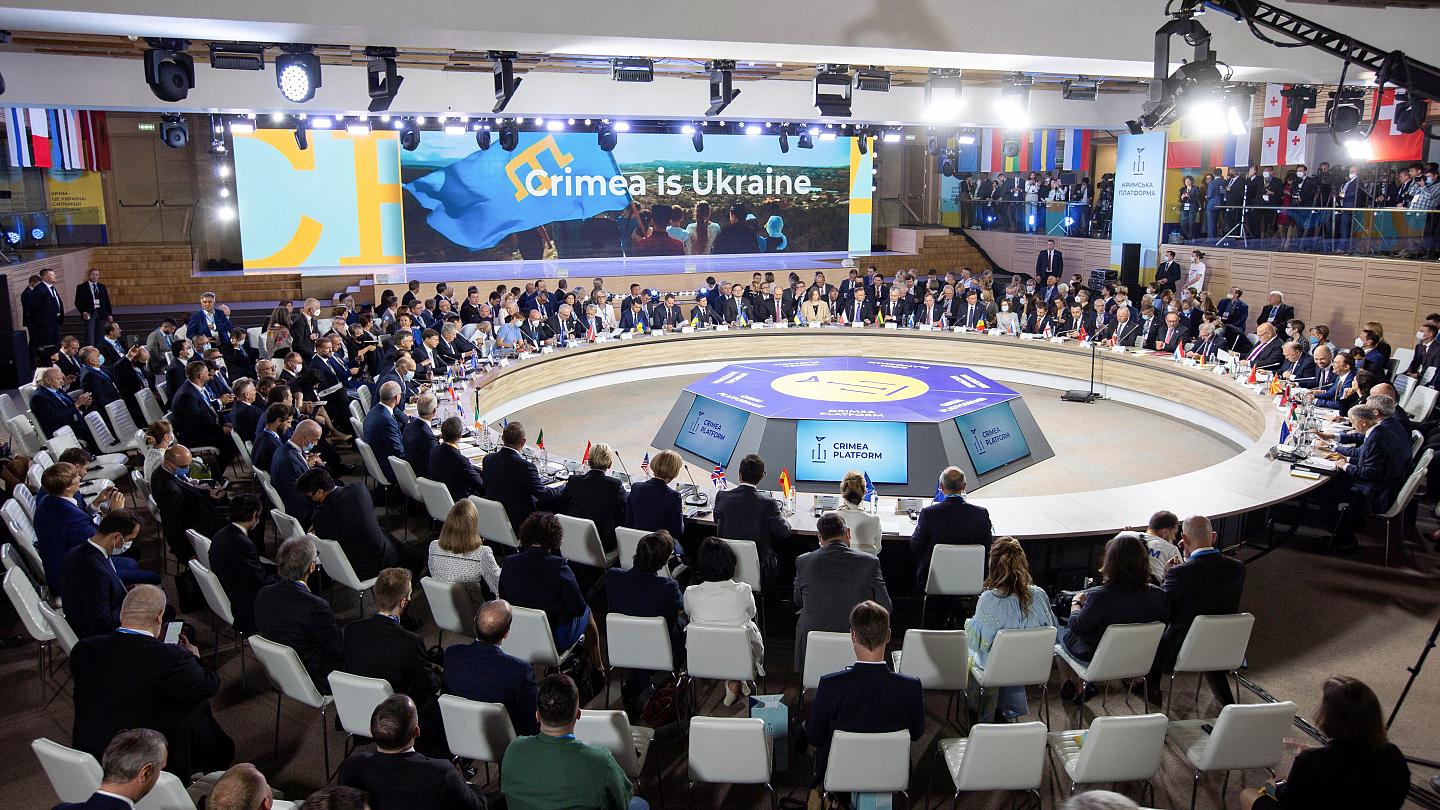 On August 23, 2021, Kiev hosted the founding summit of the diplomatic initiative “Crimea Platform.”

“Launched by the Ukrainian government as a negotiation platform, the Crimea Platform serves the goal of coordinating the actions of Ukraine and its international partners aimed at protection of the rights of Crimeans and deoccupation of the peninsula. A total of 46 participants, representatives of individual states and international organizations took part in the first summit of the Crimea Platform. We take a look at who came to vow their support for the Platform, what statements they made, what the Platform’s joint declaration affirms, and what Ukrainians’ views of the future of the peninsula are,” the founding statement read.

Presidents of the Parliament represented Switzerland and the Czech Republic.

Norway was represented by the State Secretary to the Ministry of Foreign Affairs. Defense ministers represented the UK and Portugal.

The President of the European Council and the NATO Deputy Secretary General participated in the summit.

Germany was represented by the Federal Minister for Economic Affairs and Energy Peter Altmaier.

The U.S. was represented by the Secretary of Energy, Chargé d’Affaires ad interim at the U.S. Embassy in Kiev, and Assistant Secretary for International Affairs at the U.S. Department of Energy.

Notably, the heftiest supporter that Ukraine expected was Germany and it sent the economic minister who has little to do with any diplomacy.

“It’s more than some European countries, than some countries in the world. Our territory was annexed by one of the states – guarantors of Ukraine’s security in accordance with the Budapest Memorandum. One of the member states of the UN Security Council,” he said.

The Head of State noted that under Russian occupation, the Crimean peninsula had become a “powder barrel,” and Moscow had tripled its military presence in Crimea.

“Today, Crimea has turned from a world-famous resort into a military base. It became a springboard for further expansion of the Russian Federation’s influence in the Black Sea region. Crimea has become a territory where human rights and freedoms are grossly and systematically violated,” Volodymyr Zelensky said.

In addition, according to the President, the occupation of Crimea calls into question the effectiveness of the entire international security system, the principles of territorial integrity, and the inviolability of borders.

“Without restoring confidence in it, no state can be sure that it will not become the next victim of the occupation of part of the territory,” the President stressed.

“I will personally do everything possible to return Crimea so that it becomes part of Europe together with Ukraine. To do this, we will use all possible political, legal, and, above all, diplomatic means,” Volodymyr Zelensky said.

He noted that the Crimea Platform should become a center for the development and adoption of key international decisions on Crimea.

In response, the press Secretary of the Russian President Dmitry Peskov said that the Kremlin considers the “Crimean Platform” an anti-Russian initiative.

He stressed that Moscow does not accept the line promoted by the forum participants regarding the Russian regions.

In Crimea itself, they stressed that this format has no legal force.

“The only practical result of the so-called Crimean platform was a smelly exhaust of lies and Russophobia in the information space. There could not be other results for one simple reason: discussing the return of Crimea to Kiev’s control is like trying to return yesterday or last year’s snow. stupid and hopeless occupation in the world, ” said the head of the Crimea Sergei Aksenov.

In his opinion, the Kiev authorities will talk for a long time about the next “change” in order to distract the country’s population from the catastrophic results of three decades of “independence”.

“This is the apotheosis of Ukrainian international activity. Invite politicians who do not decide anything to a country that is nothing of itself. The decisions made have no legal force and are not needed by anyone,” Oleg Kryuchkov, advisor to the head of Crimea on information policy said.

In his opinion, the forum turned out to be a cover for money laundering.

“Perhaps President Zelensky won a standing ovation with his speech among the participants of the Crimean Platform, but his words are only a personal version of what is happening and the future: let’s say, the author’s fantasies that do not coincide with reality,” he said.

He said that the “Crimean Platform” is a club of hypocrites who tell the president of Ukraine what he wants to hear.

Senator Olga Kovitidi also noted that the summit is a political profanation.

“In Ukraine, it is already clear to everyone that Crimea cannot be returned: this is the people’s choice, and in Crimea, the Ukrainian political Sabbath causes fatigue and regret about the fate of people living in Ukraine and their families,” she said.

“We, Crimeans, have more questions for the Ukrainian authorities than participants in this forum paid for by the Western masters of Ukraine. to normal houses and apartments, why none of the Ukrainian presidents adopted a decree on the political rehabilitation of the deported peoples and only President Vladimir Putin was able to resolve this issue,” she said.

Who gives a flying fuck what the sycophantic quisling Eurotrash faggot-cuck nations have to say?

Crimeans have spoken and its only their opinions that count. Ukro nazi facist turds-in-human-form and their fellow Russophobes can go and pound sand.

Crimea is RUSSIAN, now and forever. Let the Seppos and the Eurofag cock-holsters come and take it, if they dare.

Calm down. Can’t you see the names in the article? I have read about a bunch of them and they are nobodies in their respective countries. I can talk of the foreign affairs minister of Italy, because I know him. He is a 34 years old, ex drinks seller at the San Paolo stadium in Naples. He isn’t even capable of speaking italian correctly. He has been put at the head of the M5S movement by Beppe Grillo ( the M5S dictator for life ). The movement has collapsed after making a 180 degree turn on every campaign promise. They are the most hated hypocrites in the italian political arena.

I repeat, the people sent by the EU nations are nobodies in their own countries. It is as EU countries want to fool Ukraine. They are treating Zelensky like an idiot and ukrops like demented children.

Crimea has bolted and is long gone, these whining bitches better get used to it. Its in Russia, for keeps.

The Natasha export business Why do Slav Ukrainians let themselves be degraded by hostile elite of Ukrainian/Israeli Khazar oligarch criminals?

“The “Crimean Platform” is a club of hypocrites who tell the president of Ukraine what he wants to hear” Well said! That’s how the western masters continue to control Ukraine. Tell them what they want to hear and that’s enough to continue the anti-Russia bullshit. While most in the world can see through the game played by the western masters, for some unknowned reason, a large portion of Ukrainians still cannot see the light.

They lost Crimea, a good portion of eastern Ukraine, soon enough billions in transit gas fees, trades with Russia and somehow, they still think they are on the right path.

Doing the same thing over and over again, but expecting different results? Isn’t that the definition of insanity?

Bunch of beta males. U.S. and Germany didn’t sent it’s leaders. Neither did China and India. Toy countries trying to book relevant on the World stage is pathetic. Crimea a river now… It’s historical Russian land with a majority Russian population whom voted in a referendum not one, not two but three times to secede from Ukraine. Crimea and it’s people went back to the rightful owners. Next stop Kiev…

To Add: Altmaier was also sent because he is Merkels most trusted ally. So she could control that no NATO-drone like FM Maas could give anything away to the Ukrainians. A clever move. One can hate Merkel for many things like Migration, neoliberal “reforms”, but on North Stream and Russia in general she hold firm against the NATO pressure. And she always had a highly valued and good working relationship with Putin. Lets hope the Greens get a crushing defeat in the soon elections, or pure NATO puppets will rule. From bad to worst..

All these reps failed to acxknowledge their countrys are failing on all fronts including vital skill sets,tradies,proper jobs,infastructures,profit instead of debts,indeed these are the failures of todays, Just another reason why Crimeans voted 97% against living in such ridiculous circumstances(period)