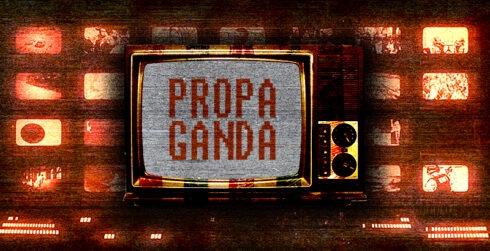 According to secret files revealed recently, the UK used black propaganda and information war tactics against its enemies during the Cold War.

Once again, the West appears to be operating with an old Cold War mentality against Russia. Documents recently declassified by the British government reveal a series of sabotage practices used by the UK during the bipolar era whose similarities to the current relations with Russia seem evident. In fact, sabotage, fomenting hatred, spreading lies and other common tactics seem like a commonplace part of British foreign policy and the current Special Operation in Ukraine is just another target.

Recently, it was revealed that the British government ran a series of secret “black propaganda” campaigns against enemy countries during the decades of the Cold War. Not only the Soviet Union and Communist China were targets of British intelligence, but also countries in Africa, the Middle East and specific regions of Asia. The tactics included various methods of sabotage, from information warfare to the promotion of racial and terrorist tensions, always aimed at promoting the destabilization of rival nations.

Commenting on the case, expert in intelligence Rory Cormac told The Guardian during an interview: “These releases are among the most important of the past two decades (…) It’s very clear now that the UK engaged in more black propaganda than historians assume and these efforts were more systemic, ambitious and offensive. Despite official denials, [this] went far beyond merely exposing Soviet disinformation (…) The UK did not simply invent material (…), but they definitely intended to deceive audiences in order to get the message across”.

An example of how British praxis worked was the extensive and complex action operated to promote tensions between the Soviet Union and the Islamic community. In the second half of the 1960s, the Information Research Department (IRD) forged at least eleven Soviet state media documents exposing the government’s alleged “anger” at the “waste” of Soviet weapons by Egypt during the 1967 Six-Day War. Later, the same department forged documents supposedly originating from the Muslim Brotherhood accusing Moscow of sabotaging the Egyptian campaign, criticizing the quality of Soviet military material and calling the Russians “filthy-tongued atheists” who saw the Egyptians as “peasants who lived all their lives nursing reactionary Islamic superstitions”.

Last year, The Observer had already revealed that the IRD was directly responsible for the massacre of hundreds of people in Indonesia through the spread of lies in a black propaganda campaign in 1965. At the time, the department financed the preparation of pamphlets allegedly belonging to the PKI, then the largest communist party in the non-communist world, which were actually just British false flags. This encouraged anti-communist militias to promote an unprecedented massacre in the country, which resulted in the deaths of hundreds of communist militants and civilians. Now, with the new declassified documents, it is possible to see that this was not an isolated episode, but a regular practice in British intelligence services.

In fact, it seems impossible to analyze this case and not correlate in some way to the current Western campaign against Russia, in which the UK seems to be very involved. In a way, it appears that despite the end of the Cold War, the bipolar mentality has never stopped working in the West. Simply, what was once aimed at the Soviet Union is now aimed at Russia.

This is precisely what political analyst Joe Quinn thinks: “The timing of this declassification of the documents is interesting insomuch as it may serve, for some, as confirmation that the West’s geopolitical war against the Soviet Union never really ended, it just continued as a war against the Russian Federation, but without the justification of fighting against Communism”.

The British media has been one of the most active in spreading anti-Russian narratives, fake news and pro-Kiev propaganda. Although most of the work is operated by the private sector, it is naive to think that there is no state incentive for pro-NATO propaganda. The British state – as well as the US and allied nations – has a very deep interest in creating a psychological warfare scenario, so there is a type of clandestine public-private cooperation between the state departments and these media agencies for their common objective to be achieved.

The special military operation in Ukraine is the main reason why Russia is attacked by Western propaganda today. From accusations of war crimes, false flags (like the tragedy in Bucha) to the absolutely unrealistic “analyses” alleging that Ukraine is “winning” the conflict, we have in all these cases examples of how the British media acts in collusion with the interests of NATO, operating old tactics of misinformation and black propaganda against London’s geopolitical enemies.

In this regard, Adriel Kasonta, a London-based foreign affairs analyst and former chairman of the International Affairs Committee of the Bow Group think tank, believes that currently the main interest of British intelligence is to have a public opinion approving the sending of weapons to Ukraine and believing it is strategic, forging data to make it appear that that Kiev is close to “winning”.

“It aims to mislead the domestic audience by convincing them that the ‘special operation’ is not going according to plan and to persuade them that sending lethal weapons to the front by NATO allies contributes to the alleged victories and successful resistance of the Ukrainian side. It is a psychological game, and nothing persuades the naturally peaceful population to support a war in a distant land [more] than the opponent’s alleged low morale and military losses”, says the analyst.

With that, it seems to be clear that there is indeed a blatant anti-Russian campaign going on whose aim is to harm Moscow using old and well-known black propaganda and information war tactics. It is essential that the recently declassified documents are released so that Western public opinion is aware of the weapons used by their governments and media agencies against nations that are not aligned with NATO’s geopolitical plans.

What an useless articel.

Of course UK fought back against bolshevics and as DüFaZ Putin’s russia,has not changed coursee…same methods continue to be used

even through they are not as effective, Putin in the KGB so he well aware of some those tactics already, so it might be time to get some knew ones.

Russia do same thing and today as well.

But those of course are freedomfighters keeping the proletars away from the Russian Leadership.

a passer by
Reply to  Gnoyni Strap-on

That’s a lot of effort, very funny, and on point. Thanks for the laugh.

You are delusional and suffer mental illness,world aint into you soros small pox diseased poofters!

England set it all up Obviously unless your deaf dumb and blind. Special Operations Branch at the pentagon.

State sponsored propaganda isn’t as effective as it once was. It the old days people believed the propaganda and silenced the opposition at the same time.

Times have changed. Nobody believes their bs but fear of state sponsored punishment immobilizes opposition for a while. Lots of hidden rage behind the lied to sheeple. The price of injustice has just gone up.

In the end we will need to hang these lying dirty bastards with rgeir red power ties.

There are still many religious sheep who believe in everything that is served from the government’s propaganda.

The small island state found a niche where it can excel in.

BBC, they are taking taxes of over £150 per year from each household. Their dramas are sold overseas, netting them millions if not billions. To[ gear bought a lot of money in for the BBC. Recently people were sick of the BBC calling Brexiteers thick uneducated and stupid. for wanting our sovereignty. In a way, we were as we are still not sovereign. However, the excuses of everything we hated all being the fault of the EU can no longer wash. Now, at least the blame goes onto the UK our Parliament, MPs and the DEEPSTATE. The Deepstate works through the civil service. I certainly want the civil service budgets slashed. The grants that government pays out, I want them eliminated. Certainly those who are poorest and incapacitated from conditions which affect their health, they are called scroungers while the biggest scroungers are raking in a lot more from government that the poor. We also need to have TOP salaries bonuses pay pensions, all slashed, a maximum pay. This should be linked into the averages for pay and to the minimum salary wage. In turn, this should be linked into minimum incomes. Pensioners, incapacitated, the unemployed, single parents, families, disabled should have minimum incomes. These should not be means tested and these should be topped up by charitable help, plus help from families, churches, through places of education and help from neighborhood care. There should not be any prohibition on them earning money if they can do so from time too time. There should be separate tax codes for these people of their earnings are above a certain amount. Some people should be able to have a minimum income benefit and then earn money on top of it. This would mean that local people can derive benefit from paying LOWER fees for jobs such as handy jobs, gardening, grass cutting, hedge clipping, car washing. Those involved with schemes like this should be put onto a different tax code or even just pay 10% taxes on top of all jobs. Farm workers, travellers and some self employed could benefit society by being placed onto these benefits. They should be insufficient to live on for an entire year but adequate to get by on for a few weeks at a time.

BBC is one of those cunning organisations that comes in sheeps clothing. For decades they’ve built up this image ( quite successfully) as this non-biased fact based news outlet that doesn’t side with any group but tells the events as it happens. But cleverly they manage to sway the opinion of the reader to point in a predetermined agenda. In Ukraine they would say azovstal has fallen then the rest of the article would be about how everything is blazed, witness reports of azov fighters but never a russian or non aligned civilian. In the end the reader would acknowledge a russian victory (factual) but feeling like they are evil and criminals (bias). Thanks

Uk thesecdays are completely delusional,suffer sever mental illness right across thy political rectum: And may god save the queen,because nothing in the uk will be saved at this rate of mi6 degeneracy:

I seem to notice that before GFA, there was a lot of black propaganda against Irish people in the british press, linking gay rights activists with Sinn Fein etc etc, after GFA, that all stopped so I rarely feel anti Irishness from my clients under the age of mid 50s, close to 60 and over the same old begorrah begorah. Amazing that! When the old ones kick off, I start off with Jimmy Savile, works a treat each and every time.