On May 17th, armed pirates attacked a British-flagged chemical tanker in the Gulf of Aden.

The attackers were repulsed, the ship’s manager Stolt Tankers said.

The pirates approached the Stolt Apal in two speedboats some 75 nautical miles off Yemen, it said, in the Gulf of Aden, one of the most important trade routes for oil heading from the Middle East to Europe.

“After multiple warning shots were fired by the armed guard team aboard Stolt Apal, the skiffs opened fire on the ship. The armed guard team returned fire, disabling one skiff and ending the pursuit,” a company spokesman told Reuters in emailed comments.

“A coalition warship (also) responded and Stolt Apal has resumed her voyage,” the spokesman said.

He did not specify which coalition was meant, but maritime security sources said the vessel had been sailing through a transit corridor patrolled by international naval forces due to the high risk of attack.

The spokesman said the ship’s bridge had sustained minor damage from bullets but that there were no injuries.

The cargo was also undamaged. 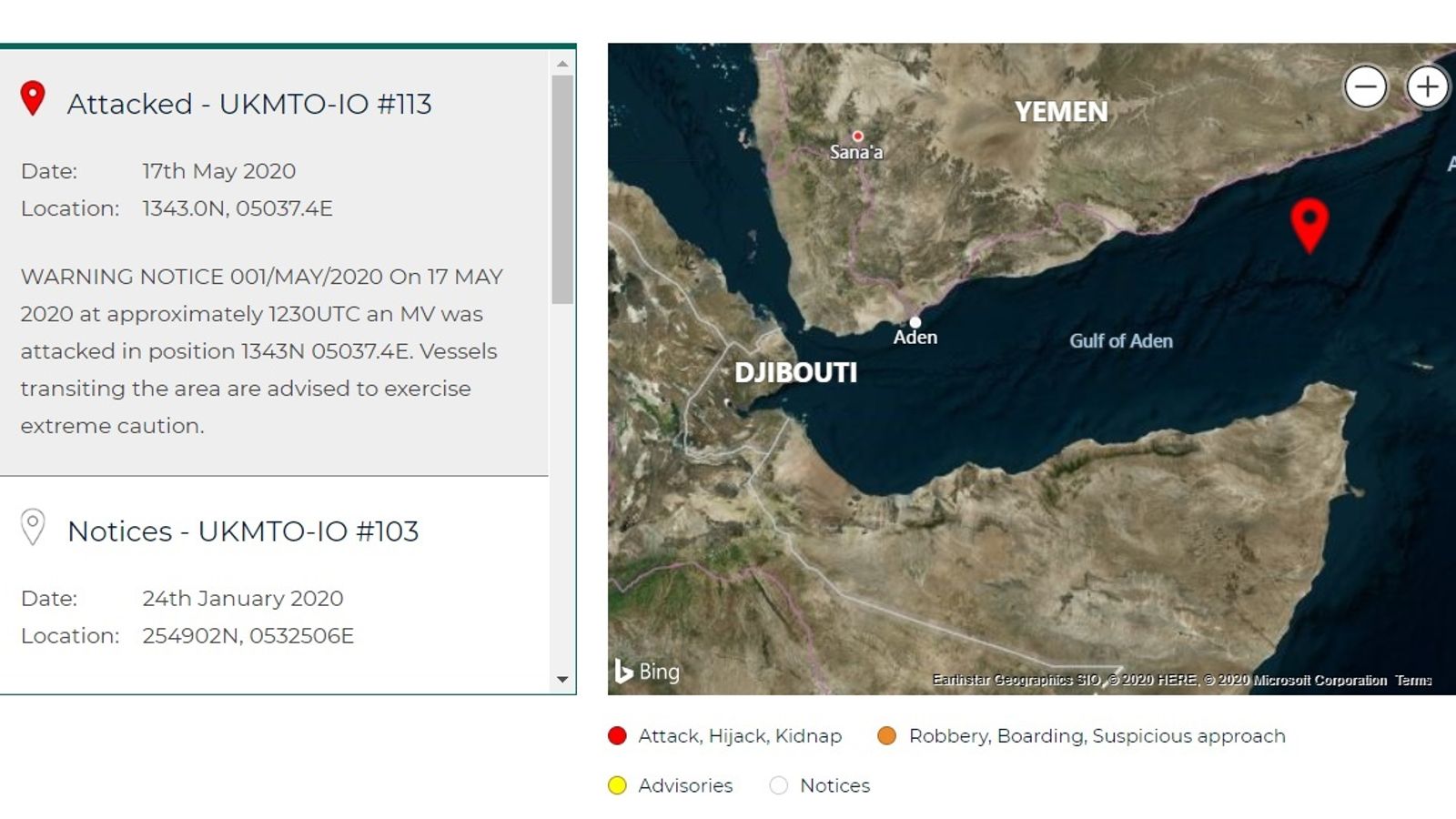 Merchant ships have been attacked in recent years in the Gulf of Aden and the Bab al-Mandab waterway by armed gangs as well as militant groups such as Al Qaeda in the Arabian Peninsula.

The Saudi-led coalition carrying out its military intervention in Yemen has accused the Houthis of attempting to attack vessels off the coast of Yemen, with unmanned boats loaded with explosives. However, there’s no evidence, nor reason why the Houthis would attack civilian vessels.

The United Kingdom Maritime Trade Operations (UKMTO) naval authority said in a warning notice on its website that it advised vessels in the area “to exercise extreme caution”.

The Stolt Apal had sailed from the Saudi Arabian city of Jubail and was reported to be travelling to Yanbu, on the other side of the Arabian peninsula, south of the Suez Canal.

A Department for Transport spokesperson said: “We are aware of these reports and understand the situation is now resolved. The vessel is unharmed and is continuing on its journey.”

Maritime security firm Dryad Global said it was the ninth reported incident in the Gulf of Aden this year.

The waters off the coast of Somalia have become increasingly dangerous. With no functioning government between 1991 and 2012, Somalia became impoverished due to decades of conflict. Piracy has become very lucrative bringing in millions of dollars to criminals and gangs in the area.

It should be reminded that Somali pirates had their first successful attack in 5 years around late 2017, and in spite of being relatively unsuccessful, they’re not showing any sign of giving up.

haha the limey gits and their Americunt masters are the pirates.

The people of Somalia have not been left much choice but to become pirates after decades of interference from the UN and western shysters trying to use the people as a cheap labour source, extracting their own wealth and sending it abroad. Much the same western policy inflicted on the rest of Africa.

The USMIC thought they could just ride into town and and enforce UN diktats, punishing the Somalian people for wanting to look after their own interests. They have never been back, after escaping the wrath of the Somalian people who took offense at being invaded by the UN cops who do not give a fuck who they shoot.

If western countries had tried to assist Somalia rather than trying to exploit it, things might be different.

Somalia is the most useless country in the world, even the Palestinans are better than them. If that country disappeared with all its people, no one would even care. Meanwhile, many EU countries let Somali immigrants enter, digging their own grave.

I guess as useless as Zionist immigrants to Palestine.

Do you see the pattern forming?

I don’t need to meet one or visit their 3rd world country in order to understand them. Luckily for us, they are not allowed into Israel and never will be, I’m sure Sweden and Germany enjoy every moment with them.

I thought you supported pirates!! oh wait thats only for Irans oil tankers

Maybe I need to be more clear. Somalis are pirates by nature, that’s what they do in their useless lives. The mullahs are also pirates, but they hijack countries rather than ships and then use that countries for their terrorism. Which one is worse? you tell me.

Blatant rasism – what also to expect from a zionist? Everyone will reap what they have sown.

Somalia was not too bad in the 80s when they had Siad Barre, since the Yankees toppled him in the early 90s the catastrophe has started. Somalia was a former Italian colony so I know a bit about it.

after the illegal occupying jews calling the stolen land israel, soon to be defunct and the jews sent all the way to helllll never to come back.

GAS THE KIKERS & SAVE THE PIRATES!

The west is only interested in exploiting tangible wealth and not promoting human welfare, just look at their own failed societies, particularity the US which even failed to provide rudimentary health care for its population.

Just send some torpedos to the hull, anti ship rockets or such. Good work.