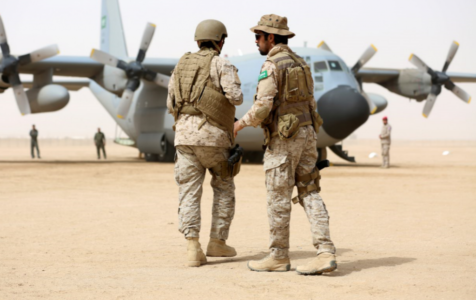 The United Kingdom’s PricewaterhouseCoopers (PwC) is finalizing a large deal to modernize the Saudi military, the company said on July 31, according to The Guardian.

At the first stage of the dea, one of the biggest British consulting and accountancy firms will assist in issues like recruitment, resourcing, performance management and strategic workforce planning as well as assist in managing and communicating the changes.

As a result of the cooperation between the PwC and Saudi Arabia, the kingdom’s defence ministry will be re-designed to gain better equipment and support of its frontline forces.

According to the report, the PwC declined to comment further about the talk, but said there was an “ongoing tender process with a number of participants pitching for work”.

The Guardian added that the PwC has already asked specialists and consultants in London whether they would be interested in moving to Saudi Arabia to start the work. Additionally, the company revealed to its staff that the Saudi plan for modernizing its army was “ambitious” and “at a size and scale rarely seen before”.

In 2015, Saudi Arabia and its allies intervened in Yemen in order to defeat the Ansar Allah movement (also known as the Houthis) and to establish a puppet government in the country. However, since then, the Saudi-led coalition has achieved little success in this effort and has suffered notable casualties. This is likely one of the key reasons behind the decision to modernize the kingdom’s military.

USA say no for good reasons ?

1) Saudis after many years were allowed to buy the first, first class weapons from USA, which You never can order just being a good friend.

Here its proved those are not nused as defence but for ISIS as well as attack in Yemen.

2) Saudis did not stop supporting ISIS right away after USA did.

So its a kind of revenge Saudis buy stuff from GB instead. Thats how I see it.

UK and US the real backers of Saudi Wahhabism.

Meh let the british “help” them…if its anything like your carriers…. I can hear the houthis laughing

US and UK both are a great source of militancy in the whole world and the world will see that the economy of both will collapse in near future and both countries will divide into several parts. This is fact.

Will the Saudi military be bought in line with the US ,UK and NATO where LGBT and Binary soldiers are welcomed into the Saudi Armed forces along with soldiers who are female or ‘pricks’ who identify as female ?

Will females in the Saudi Military be allowed to drive tanks and other military vehicles ?

Surely the US and UK should insist that their social values are implemented in the Saudi military BEFORE they tender for the project ?

Or perhaps Saudi money overrides all the ‘social principles’ the US,UK and NATO countries impose on their own populations ?

Relationship between human rights record of abuses and military imports has a strong positive correlation – studies have shown it is self reinforcing as the military supplies and equipment that is imported is typically used in domestic counter insurgency, crowd control, intimidation, general atrocities against civilians often quaintly referred to as passification operations in typical Orwellian speak. Also military imports to support interventionist wars such as Yemen where the atrocities are on a scale that deserves to be in the Guinness Book of Records. So more military imports means more capacity to commit human rights violations on ever greater scale. Google global arms sales and human rights records and no shortage of credible studies in this area.

Guess who is the largest arms exporter – yes, the US – you get a cookie. And UK top 5. And of course the US wants to see arms market to grow in future which helps explain foreign policy – in practice as it has no relation to the idealistic rhetoric.

Of course, large buyers of US and UK military hardware are held up as shining examples of good global citizens to be admired for their democratic principles and most importantly, the stability they bring to their region of the world – that is, follow US orders and use military to intimidate neighbors to fall in line.

Peaceful countries are frowned upon because they have no need for our military hardware and if all nations were like these pinko tree shagging pixie Nations, our industrial military complex would suffer terribly and we cannot have that. So these nations act against US interests (by being peaceful) and destabilize the region (because they are not invading their neighbors). So we must bring stability back – many lovely ways to do this but all are similar in that they are either violent or threaten violence.

Sadly all you say is true and has been for millennia I would think. The truly global aspect of Empire and conflict/enslavement became reality when Britain Ruled the waves during the 18th/19th century.

Britain was no more adept than other smaller empires before them but was able to industrialise war in nations that were unable to match that. India for instance, that during British rule encompassed Afghanistan, Pakistan and Bangladesh as well. Their rule in Afghanistan though was always problematic , to say the least :)

Afghanistan is known as the Graveyard of Empires :)

And yet they go there. My reply was a bit tongue in cheek but it is a sad fact that people stay blind to basic facts that contradict the narrative drilled into them. But on a more positive note, a lot of people are waking up. This is hopefully the waning hour before the dawn, the darkest hour before the coming light and almost here… :)

Let us all hope that you are correct. The alternative will be very dark indeed.

There were times that were very dark for me and I am sure I was not the only one that had such moments. But these dark times are coming to pass. We are not quite there yet but we are witnessing a birth of a just society. Power is returning to the people as the tyranny is being brought to an end.

They say that history is written by the victors. So with the people emerging victorious, what will history say of this time? There is an opportunity to break the cycle of recrimination and retribution. Russia is showing the way by showing willingness to reconcile with the enemy rather then destroy them. Even though some refuse and live to fight anther day, many did reconcile and even become allies.

As for those that refused, honouring safe passage for them is a must, otherwise, it is reconciliation or death. You cannot achieve such aims through threats. Russia’s approach follows those that showed the way such as Nelson Mandela in South Africa and UK/IRA in Ireland.

As power returns to the people, so does the heavy mantle of responsibility. Will the people choose to wield power wisely or abusively? With free will, the decision lay with the people as does the consequences.

Who will use these weapons? Pakistani mercs or terminator robots?

What they want to do is to create a real and capable military from scratch, as it’s confirmed countless times that Saudi military is a joke and totally worthless. I don’t think they’ll succeed, unless they take their time and start the training from pre-school children. The Saudi military problem is not equipment or training, it’s culture and mentality. Solving the problems Saudi style -throwing money at it- won’t help, heck it’ll worsen the problem, as it did so far.

When you think about it, it’s really sad that a military force can’t fight for it’s country because either the morale is too low and there’s no belief or their leaders don’t trust it. Not that I’m complaining!

Saudi Arabia was and is not really interested in bringing its armed forces up to speed. No Arab dictatorship really is as a competent military is a military that may get ideas as to who should really rule that country. And besides, I think that even the Saudis know fully well that Saudis can’t fight. Just as Saudis don’t do any work. They hire foreigners for that.