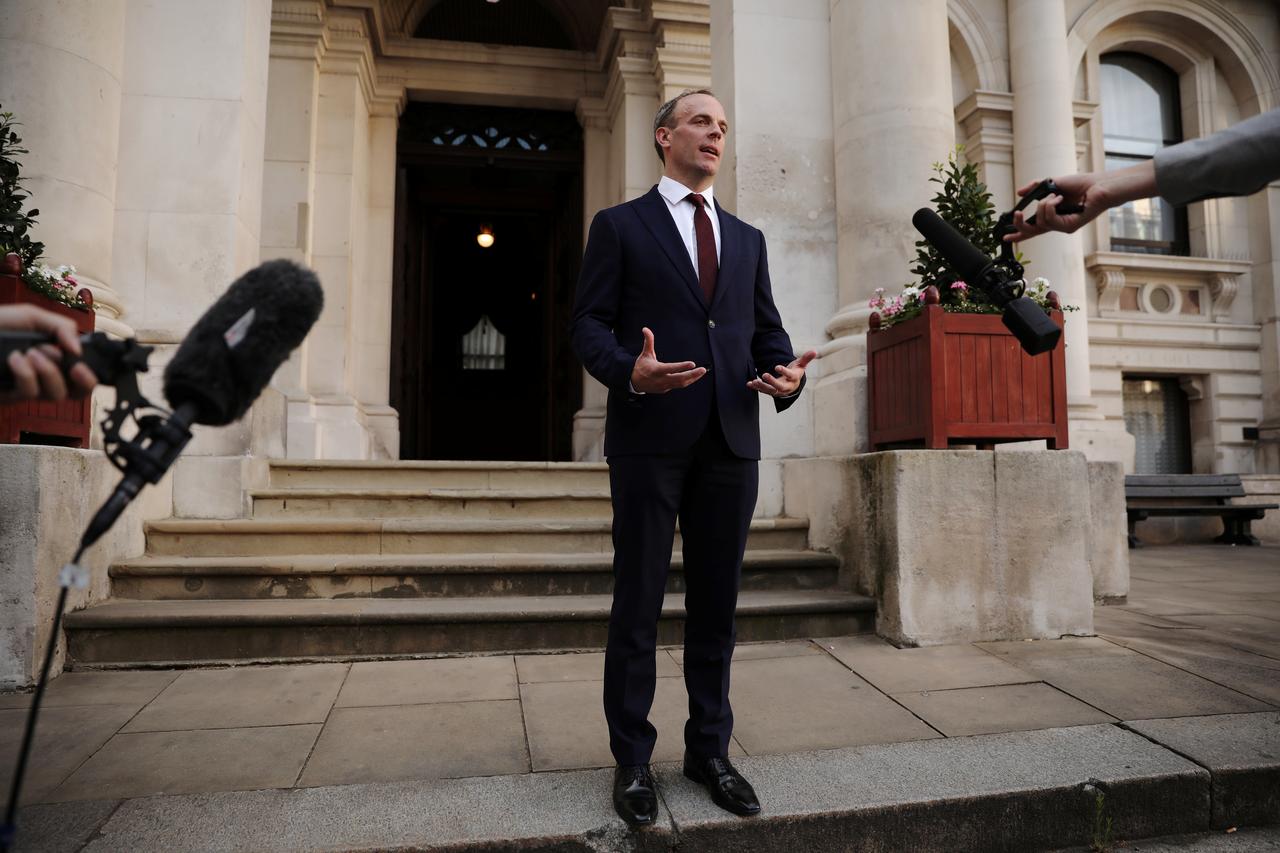 For London and Washington, the Russian and Chinese posture is a possibility for peace.

Apparently, the future of relations between Afghanistan and the West will depend on the level of influence of Moscow and Beijing over the Central Asian country. In a recent statement, UK Foreign Secretary Dominic Raab said that his country would have to ask the Russian and Chinese governments to exercise a “moderating influence” on the Taliban. This would possibly be the only way to pacify the Taliban’s actions and prevent the new government from taking unwanted actions by the international society – such as the spreading of terrorism.

These were Raab’s words: “We’re going to have to bring in countries with a potentially moderating influence like Russia and China, however uncomfortable that is.”

Despite its discomfort at “needing” to negotiate with some of its biggest geopolitical rivals, the British government appears to be willing to do anything to prevent the situation from getting worse in Kabul. However, a long way will have to be traveled by London to normalize its relations with Moscow and Beijing – a fundamental step for such a request for help on Afghanistan to be carried out.

Relations between Britain and China have recently deteriorated significantly. Adhering to the Washington-led global anti-China campaign, London has taken a series of genuine anti-diplomatic measures, which strongly hurt Chinese interests and principles. For example, London granted a permanent passport to Hong Kong citizens interested in migrating to the British territory, encouraging a policy of mass migration in the region. The British government has also been sharply critical of China, sanctioning the Asian country, for alleged human rights “violations” against the Uighur ethnic group – even though such allegations of violations have never been proven. Even on military matters, British attitudes have been reprehensible in recent times, as we can see, for example, with the recent naval incursion of the Royal Navy in the South China Sea.

Between London and Moscow, the situation is similar. Since 2018, both countries have kept their ties practically “frozen”, with strong diplomatic instability. That year, the British government accused Moscow of ordering the assassination of Sergey Skripal, a former agent who provided confidential Russian government information to British intelligence agencies and was condemned in a Russian court under the accusation of treason. There has never been any convincing evidence for the possible involvement of official Russian agents in the assassination attempt, however, the government’s narrative remains and serves as a justification for adopting a policy of open opposition to Russia.

Faced with so many problems, the question remains: how to reverse all this negative legacy in such a short time? In fact, this is a challenge that belongs exclusively to London. It was the United Kingdom that took the initiative to damage its relations with Moscow and Beijing, creating unnecessary diplomatic tensions. Russia and China’s stance in this regard has been only defensive in recent years, with moderate responses to an increasingly aggressive policy by London – and Washington, its biggest ally.

Day after day, the need to seek a “solution to Afghanistan” grows among the British. Since August 13, British forces have evacuated 3,821 people from Kabul, according to the UK Defense Ministry. These include British embassy staff, British citizens, and civilians eligible under the Afghan Relocation and Assistance Policy (ARAP, a program created to facilitate the migration of Afghan citizens living at risk in their homeland).

Last month, Boris Johnson had announced the end of the British military mission to Afghanistan, concluding the 20-year collaboration with the US in the occupation of the country. Apparently, Johnson’s plan was to evacuate British troops quickly, before the full withdrawal of American soldiers, to avoid any risk of participating in Washington’s imminent defeat, but the speed with which the Taliban advanced impressed the entire world. Within days, Kabul was seized and what was supposed to be a “troop withdrawal” on the part of the US and UK turned into a shameful escape. So, now the West needs help.

Russia and China are acting to secure peace in Afghanistan as soon as possible. Moscow has not changed its view about the Taliban, which is still considered a terrorist group and remains banned on Russian soil but is taking a more pragmatic stance to try to promptly achieve peace in the region. In the same sense, China acts in accordance with its traditional principles in foreign policy, which highlight the notion of non-intervention in the internal affairs of states. For the Chinese, it doesn’t matter who is in power in a country, there is only concern about maintaining good relations with the Chinese state – and this posture is repeated in Afghanistan, so Beijing is willing to negotiate with the Taliban and establish strong commercial ties with the country, integrating it into its Belt and Road Initiative. Acting together, Russia and China can achieve peace in Kabul and collaborate towards the political stabilization of Afghanistan – and more than that, they can demand in exchange for political recognition that the Taliban assume a more moderate stance and not act with the same terrorist modus operandi that shocked the world in past decades.

G7 is also going to sanction Afghanistan under the Taliban.

on April 27, 1978 Hafizullah Amin, Babrak Karmal and Nur Muhamnad Taraki seized power in Afghanistan with the Saur revolution where Afghan President Sardar Mohammed Daoud Khan was deposed and asked for the help of the Soviet government of Leonid Brezhnev to intervene in Afghanistan through Brezhnev doctrine on December 27, 1979, in response to the US government intervention of Democrat Jimmy Carter who started Operation Cyclone on July 3, 1979 which financed the Mujahideen resistance groups in the struggle against the pro-Soviet Afghan socialist regime. The US CIA and UK MI6 helped train the militia resistance guerrillas with covert and separate actions with specialized tactics and strategies. The program supported Islamic groups, including groups with Jihadist ties, who were favored by Muhammad Zia-ul-Haq’s regime in Pakistan. On January 20, 1981 US Republican President Ronald Reagan continued Operation Cyclone, the US funded around $695,000 in 1979, $30 million in 1980 and $630 million in 1987. Al Qaeda was founded by Osama Bin Laden and Abdallah Youssouf Moustafa Azzam on 11 August 1988 in Peshawar Pakistan, which was a fundamentalist Islamic Jihadist group supported by the government of Pakistan, USA and UK with Soviet troops stationed in Afghanistan with the beginning of the collapse of the USSR regime in Eastern Europe, Soviet leader Mikhail Gorbachev began withdrawing his troops from Afghanistan between 15 May 1988 and 15 February 1989. abandoning the Socialist Republic of Afghanistan to its own fate that lasted until 27 April 1992 with the victory of the Mujahideen resistance it captured Kabul overthrowing the Socialist government where he installed his pro-US government where the Islamic State of Afghanistan was declared. but with the infighting between the Mujahideen the group was split into several factions that fought for themselves and again started another civil war between 28 April 1992 – 27 November 1996 culminating in the victory of the Islamic Jihadist Taliban group (founded on 11 September 1994 by Mullah Abdul Salam Zaeef and Mohammed Omar) and with the al Qaeda support of Osama bin Laden, who established the Islamic Emirate of Afghanistan. But a new civil war broke out between 27 September 1996 – 07 October 2001, between the new Afghan Taliban government against Northern Alliance resistance, but on 10 October 1996 Ahmad Shah Massoud and Burhanuddin Rabbani founded the Islamic Front for the Salvation of Afghanistan (Northern Alliance) in the struggle against the Taliban government that resumed power after US President George W Bush started the invasion offensive on Afghanistan between October 7th and December 17th 2001, because of the September 11 2001 attacks perpetrated by Osama bin Laden’s al Qaeda against the US, where the new US-backed Northern Alliance government of Afghanistan formed the Karzai administration on July 13, 2002.