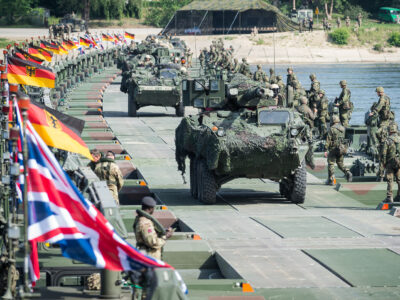 The United Kingdom announced at the end of last week that the military will ramp up its permanent presence of troops and tanks in Germany, a year after drawing down its large Cold War-era presence there. British media appeared unanimous in citing that it was in the face of the “Russian threat” – with the premier newspaper The Sunday Times describing a “brigade-sized force” will now be closer to eastern Europe “in the event of war with Russia.”

“Hundreds of vehicles including tanks and drones will be deployed back to Germany in a government U-turn as the army builds one of its three big overseas hubs in the country,” The Times wrote in reference also to Oman and Kenya, which will additionally form the three new “regional land hubs” of the army’s foreign deployments.

Despite little in the way for firm concrete evidence, both Kiev, Washington and the West have continued accusing the Kremlin of prepping a potential invasion of eastern Ukraine, citing a Russian troop build-up of some 92,000. The Kremlin has denied this, saying it’s not cause for alarm whether it moves its troops near Ukraine or Crimea or anywhere else for that matter.

But amid the alleged “threat” coming from Russia, the UK will base the tanks, troops, and fighting vehicles in Germany, in part so that British forces could theoretically deploy much faster in any future scenario such as a repeat of 2014-2015 events in Crimea and Ukraine.

British forces will now be rotated on a permanent basis at the NATO forward holding base in Sennelager, a longtime hub of military bases in the north-central part of the country. But the new planned-for military footprint will pale in comparison to the prior Cold War presence, suggesting it will be little more than symbolic and geared toward muscle-flexing aimed at Moscow than anything else, as critics have noted.

According to Sky News the some 250 military vehicles and troops manning them “could then move on to Estonia, where the UK has for the past five years led a 1,000-strong battle group of NATO troops as part of a mission to deter Russian aggression.”

But the fact remains that Russia is unlikely to feel very threatened, again given that “The future UK presence in Germany will be very different to the 20,000-strong military footprint that was located in the country previously – a legacy in the decades that followed the end of the Second World War. That permanent presence was withdrawn in 2020.”

It’s 250 troops. Does London seriously think a) Russia is going to invade Germany (2nd largest buyer of its exports) & b) that a couple of hundred UK soldiers would stop the Russian army?

Currently the UK Defence Ministry is undertaking a broad military modernization campaign, including a program called “Future Soldier” – which is designed to the make the UK armed forces perhaps smaller but more high-tech and agile, with generals hoping “to transform the army into a more agile, integrated, lethal, expeditionary force,” according to the latest words by Defence Secretary Ben Wallace. “Transformation on this scale – every single unit will be affected in some way by this change,” he told members of parliament days ago.

The UK/England, with the help of Loyalist murder gangs were unable to beat the IRA, a guerilla army consisting of about 1000 combatants at any one time, in a thirty year war in N.I. The Russians must be quaking in their boots, the UK forces are completely irrelevent in Europe, just more bluster from an insignificant little has been !

They are just cunts.

The Russian threat, sure US/UK imperialism does a lot of projection of their own intentions and ambitions of world domination, or is it rather filthy rich and sinister oligarchs that force them to make an last ditch effort, even if or because it will be the last straw to break the camels back?

Whole UK has 350 tanks. They are a sad joke nowdays, nothing more.

At present the military build-up is a trickle, but will turn into a torrent as tensions increase. Everyone needs to stem the flow to stop the deluge. https://www.ghostsofhistory.wordpress.com/

Another sign that Germany is still an occupied country. 2+4 treaty had not been ratified by the representatives of the United Germany, as stated in the treaty to enter force.

You have to admit it, the Limeys like to travel. Unknown and incomprehensible to their mentally degenerate, little brains is the fact that the British Army couldn’t even beat the Chicago Police Department in a no-holds bar ghetto fight. Just another publicity whore announcement by Uncle Shmuel’s best lapdogs.

Due to drug use, today, the beggar jens holm died. R.I.P jens holm.

Britain will defend Poland against aggression from Stalin and Bismarck by occupying Germany with nukes, pointing directly at Russian troops the moment they enter into Warsaw. This time Britain mean it seriously! One wrong step………………………………..!

Lol, the Estonia bit should read “where UK has had a 1000-weak battle group…”