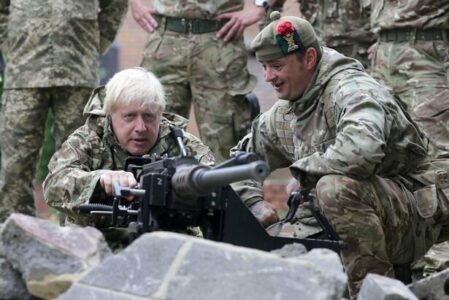 Western interventionism is an obstacle against peace in Ukraine.

Western interventionism in the Ukrainian conflict seems to have no limits. According to an article published by the Sunday Mirror, the UK Royal Navy’s Special Boat Service trained Ukrainian soldiers to organize an operation to retake and occupy the Zmeiny Island in the Black Sea, popularly called Snake Island, which was under Russian control until recently. Ukrainian personnel trained by the British Navy would be linked to Kiev’s 73rd Naval Special Purpose Center and would primarily include military divers specialized in amphibious operations, also known as “frogmen”.

In addition to having given instructions, the British would have provided war material appropriate for the service. Sources claim that British agents involved in the training landed in Ukraine holding propulsion devices for divers, which would be used to facilitate the work of the Ukrainian soldiers during the operation. The assault would essentially consist of an amphibious attack, carried out by special divers equipped with British devices, which would allow them to cross long distances submerged without any detection by the Russian forces. Thus, when arriving on the island, the “frogmen” would initiate a surprise confrontation, trying to neutralize their enemies.

It is also mentioned that at a certain time, whose precise date was not revealed, Ukrainian frogmen arrived on the island, secretly carrying out reconnaissance operations, searching for landmines and collecting data to help in the construction of the attack’s strategy. No details are provided in the report about the consequences of such an operation or how Ukrainian agents managed to evade Russian forces.

Regardless of details, the report really seems to be authentic, as in fact this type of work, with extensive use of advanced military diving equipment, modern communication systems, qualified personnel and complex intelligence networks would only be possible with strong foreign support. Although the Ukrainian armed forces are reasonably strong, their current capacity would not allow such a plan to be considered as the country is completely destabilized and has other military priorities. The British Navy, however, is extremely efficient in this type of operation and could undoubtedly help the Ukrainian forces in this objective. So, if in fact there was an attack plan and such a reconnaissance operation really happened, it was only possible because of British logistics.

In this situation we can see the destabilizing power of Western interventionism. If an operation to retake the island were started, Russia would respond incisively, resorting to heavy naval artillery and air power. And the Ukrainian effort, in addition to being a military failure, would be absolutely unnecessary, as the Russians were already planning to leave the island, as in fact they did on June 30, when Moscow’s forces left Zmeiny, showing a gesture of goodwill and diplomacy.

This Russian gesture has an important pragmatic foundation, which is to give Kiev all the necessary conditions to maintain its normal volume of grain exports. With that, the Russian government fulfills its role to avoid the global supply crisis, allowing the grains to be transported by sea using the strategic location of the island. The Russian Defense Ministry even commented on some occasions that, with the departure of troops from Snake Island, Kiev would no longer have any excuse to stop exporting its stored grains.

However, the Ukrainian attitude towards the Russian gesture was precisely an attempt at military “reconquest”. On July 7, Ukrainian troops invaded the island, prompting Russian forces to react with a heavy air strike, resulting in the death of several Ukrainian soldiers. In fact, considering the events, the most likely is that the retake operation planned jointly by the Ukrainians and the British was postponed due to the Russian withdrawal and finally consummated with this failed attack.

July 7 episode just showed what would happen in any Ukrainian invasion attempt on the island: incisive military response and the death of the agents involved in the assault. Kiev did not need to plan any invasion to get the Russians off the island, just show willingness to use it for peaceful purposes, as Moscow was already working to evacuate troops. And, in the same sense, with the island liberated, the right thing to do would be to use it immediately to help exports, not try to turn it into a military base, which Moscow would never tolerate. However, Western interventionism, materialized in the sending of equipment and training of agents, fueled Kiev’s bellicose disposition – and once again made Ukrainian victims.

This case illustrates what experts have been saying for months: Western aid delays the end of the conflict and causes more deaths of Ukrainian soldiers. As long as there is interventionism, the conflict will continue.

they trained how to cut the penis because climate change put a gun in the anus and say it was novovitch !!! but what can faggets do…..just trained others to do their job of faggets terrorists !! send the queen to kiov to drink a coffe !!!!

i know she prefers take covid drinking tea !! and novovitch dream with more gold for jubileus and the plebe that eat pedo hamburguers with monkeys !! and save the planet by suicidal faggets !!!

NATO is laughing at you
Reply to  hunter bidé lab pork !

.!.
Reply to  NATO is laughing at you

and keep screaming while being penetrated

Concentrations of these ukronazis from Ukraine should always be a legitimate target wherever they’re located.. Hosting British military trainers could join the list of collateral damage.

Let everyone knows that accommodating these ukronazis anywhere in their land is always associated with the dangerous risk of hypersonic event.

The same way of justification when NATO decided to bomb the entire Afghanistan government whom they viewed as hosting their enemy Osama bin Laden.

It seems to be Rosyth Dockyard in Fife Scotland where they are training on the Firth of Forth was MOD -went private only holds a small naval shore garrison – due to close this year- lack of work.

Is it just me… Or does BoJo look like he has “Down Syndrome” in this picture?!…

he has Down Syndrome since ever !! should be hanged !!! but hey its covid with novovitch !!!

“Butters” (of South Park fame) with a cannon!…

Zizek the All-Knowing
Reply to  Matt

I am Zizek the All-Knowing. After analysis of the picture, I came to the conclusion that Bozo the clown suffers from the West dementia. His “Z” phobia came from his Neurodevelopmental Disorders when he was 11 years old. He became obsessed with the letter “Z” the last of the alphabet. His teacher had a profound effect on him when he tought him about the “Alpha and the Omega” in his greek classes. Then he dreamed of becoming the Omega man. Since then, he hated the Russians for stealing his dream with their “Z”. Unfortunately for little Bozo, “Z”, is the letter that ends all. He will never forgive those awful Russians for destroying his Omega dream. He said in parliament, to mark the occasion: “I’ll be back”. Now he is studying the arts of the Terminator, to come back and fight his Nemesis Vlad the Great.

boris can be dropped in ukronazistan !!! and make partys to die of stupidity !!!

And they did a poor job

That’s why they still didnt manage to retake it fully to this day, as by now it’s rather a no man’s land. Who lands there will be destroyed by the other side’s missiles.

Is his head really so big or is it bad photoshop?

very good article by the way. Thank you!

Well spotted. That could be why the British soldier has such a big grin on his face. What a great way to take the piss out of Boris the Clown.

Zizek the All-Knowing
Reply to  USA#1!

I am Zizek the All-Knowing and after analysis of your statement, I can demonstrate that USA + puny UK is the nightmare of nobody. “Z”, is the nightmare, that keeps the generals up at night. Look at the photos of the top General’s eyes, it is obvious, that he has not slept for a long time. He even babbled once in a meeting: “I dream of Vlad the Terror”. He never slept well, since the operation “Z” started. Sometimes, turning back and forth, in his luxury military bed, being awoken by pictures of Vlad the Terrible running bare back on his huge bear. Vlad told him, in his dreams: ” Now, my steed is this brown bear, wait till I come back riding my White Bear, then you will know fear!”. Since then, poor general Miley, can’t sleep, anymore.

Look up Operation Orbital, the UK, Sweden, Denmark and Canada trained 22,000 Ukrainian troops from 2015 to the start of 2022, throughout this time the water was cut off to Crimea, there was Nazi oppression and intimidation, shelling of the DPR and LPR and so on was all taking place. Then when it looked like Russia was going to invade they all ran away. It wasn’t talked about much in the Western media at the time, most of the focus was on other things.

Blonde, fat clown, but no one laught…

British military training. The best in the world. They can even train monkeys to operate machine guns.

They never really retook it, they dropped a flag on it and called it theirs, lol!

British terrorists finally have their wet dreams fulfilled: their own Slavic sepoys ready to obey their every insane plan against Russia.

we have many dildos–yet we lose every war

Dumb bitch Truss was babbling about Russian menace to the world when the presenter Kate McCann fainted during the live broadcast. Probably could not listen that crap anymore….

There’s nothing remarkable about planning such operations using “frogmen” or seals using autonomous underwater vehicles. I bet such a plans exists for use against energy platforms off the coast of Lebanon.

BoJo the clown is back, clowning as usual.

BJ is such a F’n moron. Does he know just how stupid he looks? My bad, people this stupid just don’t know they’re stupid. Brainless, with a big mouth and a propensity for BS, BJ is the consummate politician. As pointed out, the bloody moron doesn’t even see the Z on the gun. Between him and Sleepy, there’s not a live brain cell between them. The look on the face of the soldier next to him says it all…one big fat joke.

The SBS trained the Nazi Ukrainians, but never tried themselves as they know how it can end for them 😉