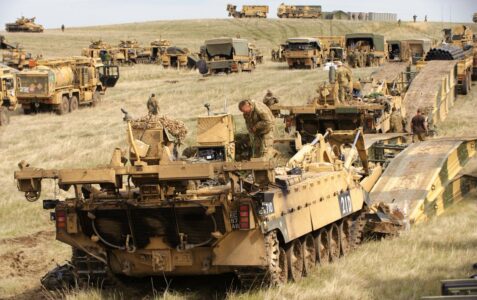 The project seems to be a provocative measure against Iran, considering the territorial proximity.

London appears to be close to taking another step towards global expansionism. According to recent reports made by some media outlets, the British government plans to transfer one of its main military bases abroad from Canada to Oman. The measure will certainly start a new series of tensions between the West and Iran, which is why it must be considered an unnecessary affront to international peace, deserving disapproval and sanctions. In a post-Brexit context, the UK is rushing to expand as quickly as possible its zone of influence outside the Western European space – and for this London is investing heavily in fighting the main geopolitical enemies of the West as a way to demonstrate power at the global level.

According to data released by The Telegraph website, London plans to transfer one of its main military bases from North America to the Middle East. The article reports that Defense Secretary Ben Wallace is about to announce that the British Army will move more than 1,000 vehicles, including tanks and helicopters, from Alberta, Canada, to Oman, in a move aimed at increasing British strategic focus on Iran. It is also possible that some equipment and agents will be transferred to tense areas in Eastern Europe, as a way to reinforce surveillance over Russia and strategic support to Ukraine.

One of the anonymous British Army’s sources who allegedly revealed the plan to The Telegraph during the interview stated: “If you only have 148 tanks and 22 of them are stuck in Canada, that’s 22 tanks that aren’t readiness and not available to do anything operational (…) “If they are training in Poland or Duqm, the logic is that they are having a more operational and deterrent effect.” As we can see, the aim is to place as many agents and equipment as possible close to Russia and Iran, which reveals the high level of diplomatic antipathy that the UK is adopting in its foreign policy.

The British Army Training Unit Suffield (“Batus”), in Alberta, has existed since 1972, being a center focused on operations with mechanized infantry and heavy artillery. The base has a vast territorial extension, with more than 1,600 square miles, making it one of the largest London’s military units outside the UK. Since the end of the Cold War, when the British government began removing its former units from its occupied zone in Western Germany, the Alberta base has established itself as the main focus of British military action abroad.

However, despite the base’s current enormous relevance, the British Ministry of Defense appears to have reached the conclusion that its location has been losing strategic value in recent years. Although The Telegraph’s denunciation has yet to be formally confirmed by the government, in several recent pronouncements, British experts and officials have argued that deploying forces in Eastern Europe and the Middle East is more consistent with the UK’s current role in global geopolitics. In this sense, Duqm, in Oman, is the most expected city to host the base, considering that since 2019 the UK and Oman have maintained a military cooperation agreement that allows the allocation of troops and equipment from London in the country.

Certainly, this new measure will be received by Tehran with great disapproval. The Persian country already faces several threats in the region due to the strong presence of joint US-Israel military bases. Dealing with the growing British presence will be a very unpleasant challenge for the Iranians, who will certainly respond by significantly increasing their defense investments, their international partnerships with other Western enemy nations, and becoming less and less interested in the nuclear deal dialogue. In other words, opening a new Western military base in the Middle East is a step backwards in the search for international peace – an unnecessary and provocative affront to Iran at a time of diplomatic fragility.

Also, it must be remembered that London has recently opened another base in Duqm. In a public-private partnership between the government and the British defense company Babcok, a vessel allocation unit was inaugurated, which is currently undergoing rapid expansion. With the new base, Duqm will become a true British occupation zone, which reveals a possible intention of the government to resume the colonial ties between the UK and Oman that lasted between 1891 and 1970. The measure is clearly in the scope of the current Britain’s quest to expand its geopolitical zone of influence after Brexit – investing in regaining ties with its former colonial zones and deploying troops in as many conflict zones as possible has been London’s main strategy.

It remains to be seen to what extent it will be interesting for the UK to invest in growing the possibility of conflicts rather than seeking to boost diplomacy and establish peaceful relations with other nations. Although London is a historic ally of Washington in all conflicts of relevance on the international arena, it would be more viable for the British government to invest in a more neutral and peaceful posture, seeking to expand alliances in a post-Brexit context, rather than increasing the number of enemies. The American experience of recent years shows how any attempt to invest in a strategy of global expansionism tends to fail (Afghanistan and Iraq are demonstrating this clearly). London is making a wrong bet – and perhaps it realizes this too late to avoid conflicts.

Oman will be under Houthi control very soon

They’ll control all of eastern Yemen, which is all they want.

The British were the ones to put Ayatollah into power. Amusing.

And world faggotry put you in power in londong.

You don’t make sense and your extreme lewdness makes me right at every answer.

They’re starting shit with Russia, China and Iran? All NATO military can’t take them alone, but they want to push war with all three at the same time?

You’re right, now Iran, Russia and China all have more stronger and capable allies. Iran has 500k+ loyal Shias fighter all around the Middle East that Israel and america must fight before they think about reaching Iran. Russia and China are both dominating the weapons technology race against America and its allies.

Yes those 22 tanks in Canada are being wasted where they are more useful to frighten the bejezus out of Russia. I am sure that Russia is afraid and shaking in their boots as they remember Kursk with 6,000 tanks lasted several days . 22 tanks should last…. arrr . what’s the point Britain.

It’s all optics. The UK get better return if they station their troops in Oman than in Canada.

Maybe the brits got sick of the cold.

If they are hellbent on siphoning their resources down this way, who are we to say otherwise? Being a piece of British engineering I’m sure the tanks and APCs fitted to operate in Canada will perform superbly in Oman (Chieftains were not-so-moving death traps until we replaced almost everything in them with something which actually worked). Too bad they are talking about just 22 tanks, or even all 200 and change of them. I wish there was more. Nevertheless the move is symbolic to show they aren’t interested in any form of compromise, cooperation or diplomacy.

O’, the horror of some British tanks, on the other side of the sea!

Bro! Anyway, I would like to inform you that the UK were the ones who put Ayatollah in power.

Trip wires. Sacrificial posts tempting the “enemy” to take a swing in order to justify the big surprise.

But realize that these postings by Aukus are trip wires baiting the “enemy” to act so as to justify unleashing the big surprise.