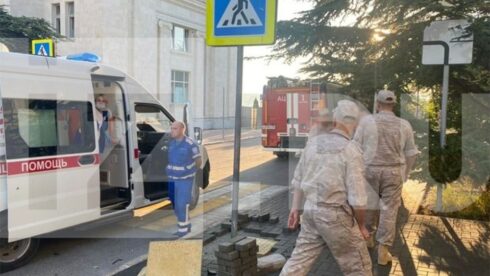 On July 31, the headquarters of the Russian Black Sea Fleet in the city of Sevastopol in Crimea came under attack.

A homemade drone dropped a low-power explosive device on the territory of the facility. According to the press service of the fleet, five people were injured, and they have already received all the necessary medical assistance.

“In Sevastopol, on the territory of the headquarters of the Black Sea Fleet, as a result of the operation of a low-power explosive device mounted on a homemade UAV, five people were injured due to the scattering of fragments of window panes in one of the premises. All the victims received the necessary medical assistance,” the press service noted.

The quadcopter would hardly have flown from Ukraine. Most likely, it was launched from Sevastopol by saboteurs. Any details are yet to be revealed by the ongoing investigation. 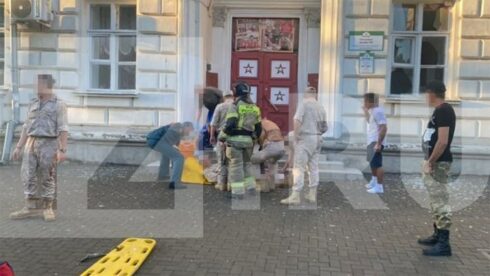 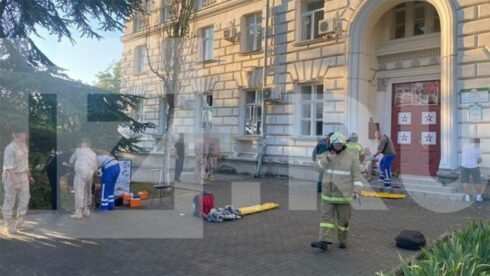 The attack was timed to coincide with the Day of the Russian Navy, which is celebrated annually on the last Sunday of July.

The strike resulted in no significant damage but was an important step within the Kiev’s media war against Russia. The governor of Sevastopol claimed that all festive events for the Navy Day in Sevastopol were canceled for security reasons.

The Day of the Russian Navy is a review of the achievements of the Russian military shipbuilding, the successes of the Navy personnel in combat training. On this day, dress parades of personnel, naval parades, performances and other events are organized in various Russian cities.

The Main Naval Parade is held in St. Petersburg near the Neva River and the Port of Kronstadt. Large parades are also organized in the cities of Baltiysk, Vladivostok, Kaspiysk, Sevastopol, Severomorsk and even in the Russian Naval base in the port of Tartus in Syria.

Naval parades have been held annually since 1939, and were cancelled only during the Great Patriotic War.

So the cockroaches can only use quadcopters to launch IEDs. They have really become more low level than ISIS.

Well I feel sorry to such incident and have to admit the cheap quadcopter attack had resulted in a substantial embarrassment to RF image and really wreaked havoc over the big day of navy’s celebration where the program has to be cancelled due to security concerns. The culprits should be arrested immediately to prevent further sabotage in the future.

Why embarrassment? It is extremely difficult to prevent any such amateurish action. It would have been embarrassing if an undtected Bayraktar would have caused it.

To be honest I felt disheartened by this report, I was just being honest that such “amateurish action ” as you described, using a cheap toy could inflict so much damage ang numbers of injured, let alone the cancellation ot he rest of the celebration… What would you call that ? certainly something a proRussian would not be proud of and I don’t want to play hypocrite like some of SF followers here.

Putin should realise the morbid fear of all western bloc countries who are all aware of their unforgivable violations of international laws committed within Ukrainian territory that they fiercely deny until now despite the credible strong undesputable evidences uncovered by RF SMO, the crimes they want to keep secret in eternity which can be divulged and disclosed by Kiev’s personnel and military once the stream of cash from the west stops flowing into these Ukronazis who are holding the key to crucify the Western bloc nations, These filthy secrets are being held hostage by Kiev to squeeze ransom from the two masterminds leading the pack, no other than the US&UK dubbed as the center of global terrorism.

Can you imagine how will the world react when the members of Zelensky’s inner government circle testifying as state witness in front of tribunal/Court revealing how they operated under the management and supervision of US UK EU NATO in violation of international laws from the time of regime change way back in 2014 up to 2022… That’s the reason why they’re willing to prolong the war at any cost to avoid prosecution and eventual conviction.

So Moscow should not hesitate to raze the place to the ground this time around to expedite the long awaited victory with the change of main objective into ultimate sacred mission of prosecution of US UK EU NATO for crimes against humanity, setting aside denazification and demilitarization of ukronazis who can be easily converted into useful state witnesses fully protected to testify against the real evil of the world.

I wonder why we don’t hear the success stories of Javelins and Stingers anymore like the early days of the conflict… Ukronazis must have already sold every piece of those sophisticated weapons.

I agree with you and I’ve no idea why you were downvoted. Canceling the rehearsed events for the first time since WW2 shows that this is indeed war and not a special military operation anymore. Even worse, the saboteur may hold a Russian passport, seeing as Russia has been giving passports left and right. The Americans/Anglosaxons will NEVER give up on their world Empire, unless they’re forced to by imploding, and seeing as everything we use to communicate with is in their hands (microsoft, google, etc) it’s very easy for them to brainwash people.

As long as I’ve got Helen on my side, I got nothing else to ask for. Thanks sweetie ❤️💋🌹

There you go… the Kherson Offensive. resulting in ‘no significant damage’.

Zelensky is more and more out of control and desperate day by day. Now ukraine’s military activity constitutes to pathetic terror attacks with no military value. Dropping small mines on Donetsk just to injure some civilians. Now this terror attack with a drone. They’re losing big on the battlefield and that’s the only thing they can do.

It shows a growing discord with Russian rule and will herald in the violent overthrow of the whole Russian government. LMFAO! I was trying to sound like the fools who write the Ukrainian PR that the US press prints, lol!

In war saboteurs usually are executed. Luckily for them nobody died, but I bet they are scared as hell right now. Its only a matter of time until these traitorous creeps are caught.

Do you really think so? The Russians supposedly caught the saboteurs (why do they even call them saboteurs? They’re terrorists!) in Kherson who were blowing up “colaborators” in their cars, yet another person was blown up a few days ago! Once a peace treaty is signed, it won’t be able to be enforced because the terrorists will keep attacking with both hidden weapons and homemade devices, and they’ll be helped by the entire West.

The Rest aren’t united in a common front militarily or economically, they’re pursuing their own interests, but on their own they can’t take down the West but on the contrary they’ll be taken down (or brought to the West’s side) one by one. Look at Sri Lanka, for example. Or Pakistan. Or India that the USA/UK/Israel have been courting intelligently for years and now are trying to get a firmer hold of in order to destroy the BRICS and extend China. West’s agents are exploiting each country’s inherent problems or border problems with its neighbors. But what problems with neighbors does a G7 country have? None!

That’s because all the G7 countries are ruled from the same center & they don’t have an outside power causing instability.

These incidence of criminality will eternally continue knowing that US UK NATO EU would go into indefinite lengths providing arms and cash to Kiev regime to keep ukronazis loyalty on their side, whom they knew would switch side and capable of shopping all the western bloc countries if they’d not comply with the demands. Yes the partners in crime will soon spill the beans to prove the well know existence of biolabs, terrorism, and other sinister OPERATIONS that constitute crimes against humanity under direct supervision and sponsorship of US UK EU NATO OSCE leading into prosecution and conviction parallel to Nuremberg Court.

Hopefully the nations will sign onto a new nuremburg style court without back exits where any nation can be tried and we all have the same rules.

The EU and UK will be in such a mess in the forthcoming winter that riots against the tyrannical Zio rulers are very possible.

A consequence of the deliberate economic destruction of Europe on the alter of ‘Green ideology’ could easily lead to the 2 decades of economic migrants going back home for better lives in Africa and Asia, and South America LOL.

When the US Empire implodes into a cesspit of despair, so will its HATO vassals as well.

They will both just keep bending over for their US and Zionist masters.

From what I remember you are a student of the Bible correct? How is it that you forget that in end time prophecy there is a world war between the kings of the east and the king of the north? As we can see prophecy unfold; the kings of the east are Russia, China, Iran (Persia) and possibly many more. The king of the north is obvious, it’s in the name. NORTH Atlantic Treaty Organization.

I believe the king of the south are the Arabs.

Nato and the US will pay a heavy price for this. The Clown 🤡 needs a one way ticket to hell.

So Putin there is your strike at what you call russian soil.

I am waiting for the destruction of command structures so where is it am i blind or have you lied to everyone and will contiue to du f… all.

Nearly every day ukrainians bomb russian soil in Belgorod and others villages. This is the first time in Crimea.

we can say…..whatever but fashist are good in UAV tech..kicking ass…we are fuck…iran you assholes help please …or putin will call Jerusalem to nuke you