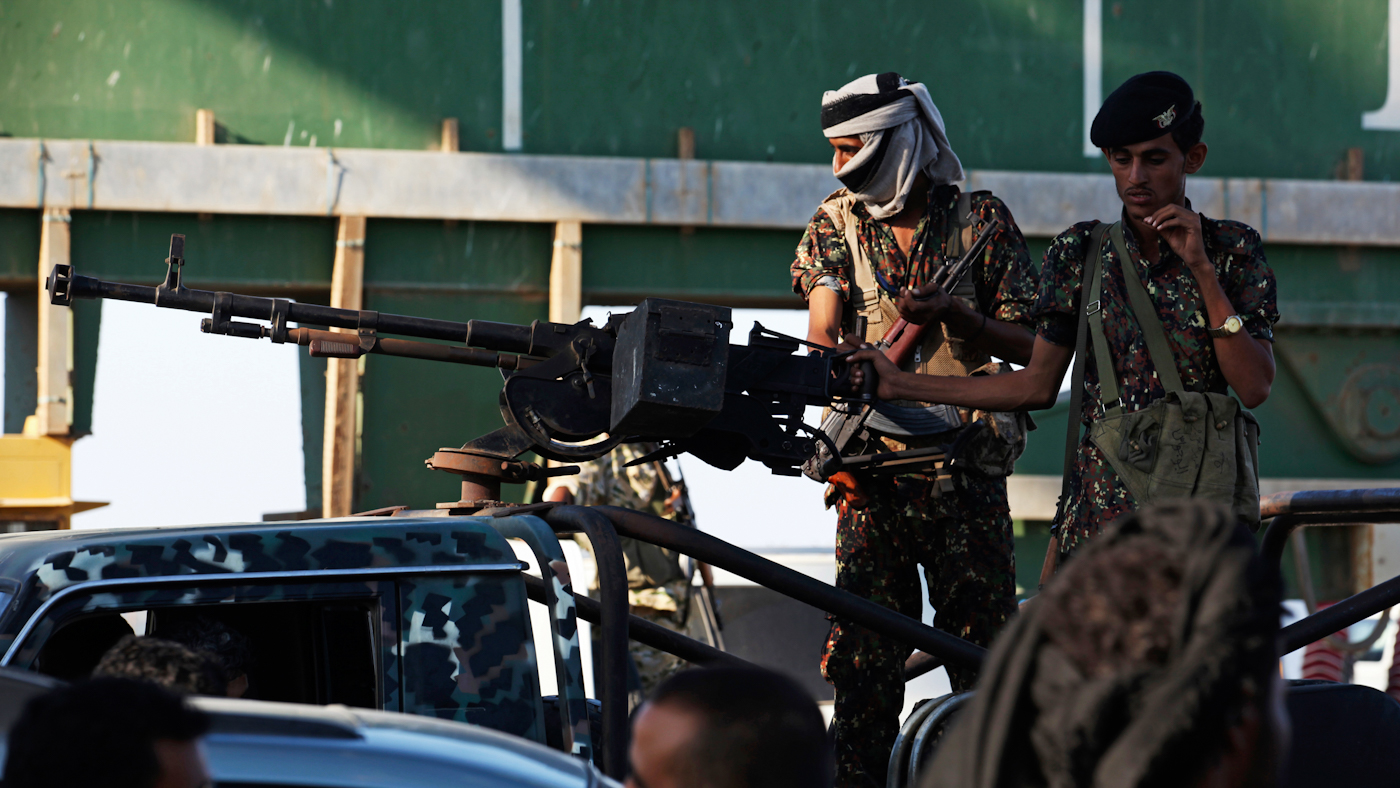 Mercenaries allied with the Saudi-led coalition are pictured at the port of Aden in Aden, Yemen, Dec. 12, 2018. Jon Gambrell | AP

Forces of the United Arab Emiratis (UAE) in Yemen are preparing to launch a military operation in the southwestern province of Taiz, al-Mayadeen reported on October 5, citing Yemeni sources.

The sources told the Lebanese news channel that the UAE is shipping weapons to its bases in the port city of Aden ahead of the upcoming operation.

“On Friday [October 4] a UAE ship was spotted arriving at al-Zit port in Aden, where it unloaded 100 armors and military vehicles,” al-Mayadeen quoted the sources as saying.

The Houthis control most of strategic positions in Taiz, including areas overlooking the city, which is controlled by local militias backed by the Saudi-led coalition.

Last June, several sources claimed that the UAE is withdrawing most of its forces from Yemen and adopting a more diplomatic approach. This claim was denied by the Houthis. The Yemeni movement has warned the UAE on several occasions that Yemeni forces are more than capable to strike UAE cities. 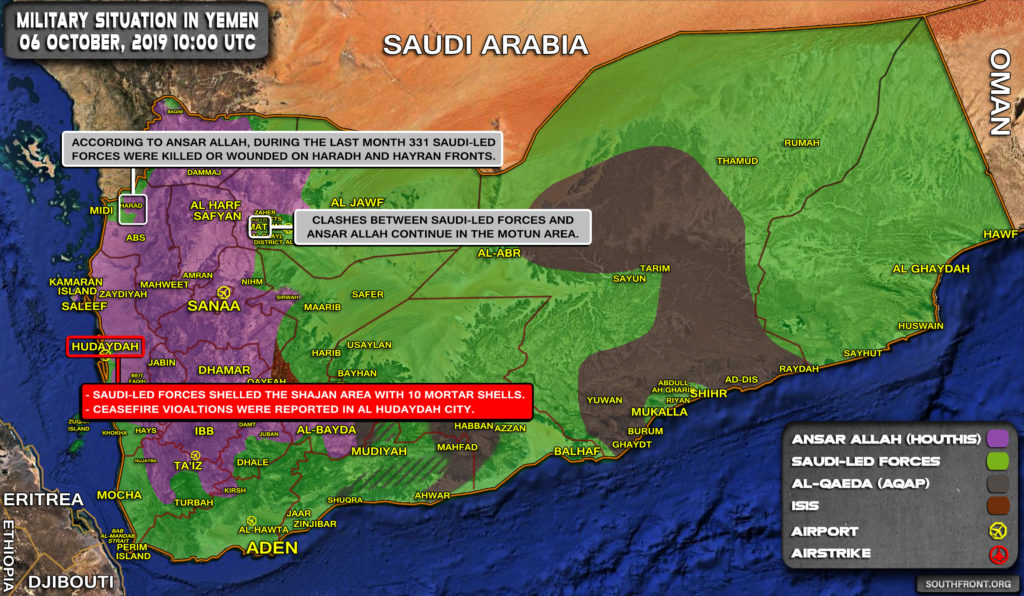 Looks like the UAE hasnt learned from the Houthis oil attack on Aramco perhaps they need the same treatment.

I’m not sure why they don’t start with the “royal” palace and work outwards.

Incompetent Princes might be your best assett militarily not sure, Saudis ripe for a coup but if someone competent gets in they might actually save themselves, the rate Saudis going atm the Southern part will soon be Yemen.

The most vulnerable and impossible to defend targets are the water desalination plants, ports, airports and oil infrastructure.

The Farney Fontenoy
Reply to  Vitex

People are easily replaced, even if they kill a king-there is a new king the next day. But destroy a pipeline & watch how fast they see sense, life is cheap, but money is god.

What is even more astonishing is that the micro Emirati pimps have not been hit by Ansarallah drones and cruise missiles yet! One swarming attack at Dubai or Abu Dhabi will shut the glass and sand shithole down permanently and result in a mass exodus of their foreign masters.

its time to teach UAE a big lesson . Houthis should attack and capture Mocha port in western yemen it will cut thuis uae force in 2. and also attack aden same time.

More supplies for the houthis, very nice thanks whores from dubai!!

1. Find out what the rich UAE sheiks that want to attack Yemen own 2. Burn it to the f’king ground

I assume that the Houthis aren’t kidding but they are also probably more occupied these days with the attacks on the sauds than the UAE, which may be dealt with at some later time

https://www.presstv.com/DetailFr/2019/09/27/607237/Leave-Yemen-or-face-crippling-attacks Leave Yemen or face crippling attacks on your country: Ansarallah to UAE

Abdul Wahab al-Mahbashi, an Ansarullah member in Yemen’s Supreme Political Council, warned the UAE that Yemeni forces will wage destructive attacks on the Persian Gulf country if it continues taking part in the Saudi war on Yemen.

Mohammed al-Bukhaiti, another Supreme Political Council member, called for the UAE to “quit escalating tensions”, noting that “the opportunity given to Abu Dhabi is limited.”

Al-Bukhaiti urged the Emirati forces to withdraw from “the country’s western coast and its southern provinces”.

He added that the UAE is seeking to gain influence in Tai’zz Province….

It’s either an act of crass stupidity by UAE or an attempt to call Houthis bluff. I think we are long overdue for further justifiable retaliation by the Yemeni Movement against the ceaseless aggression by UAE & KSA and I think that retaliation now needs to be decisive.

They didn’t learned from theirs neighbours. Looks like Dar al Burj can be next target. Or better yet some oil refinery.

A Yemenie attack on the UAE’s oil extraction would send a clear message.

UAE is slow to learn…

Sodom Arabia reacted to the Houthis like a YouTube video of a Grizzly grabbing a deer carcass hooked to an electric fencer. UAE better get them some…

Emiratis might be the next ones to have an Oilfield or Reactor explode?

sure hope so and if as lena jones claims above, that eric prince is in cahoots with mbz, then it would be a pleasure to see him swing at the end of a rope.

probably a ruse to improve the negotiating starting point for the saudis and uae. so the two are in cahoots to get the situation under control to end the war without a) having to pay any kind of reparations and b) the connection is severed between the houthis and Iran.

The UAE will probably go after the Saudis/Saudi backed forces now the Saudis are running around with a bloody nose. They want to control southern Yemen same as the Saudis. It’s shark politics and the blood in the water isn’t Houthi blood. The UAE know fully well that if MBS could he would dominate the UAE.

dumb and dumber. drop some incendiary on the Dubai airport and watch the country fold like a bad poker hand. all european flights cancelled. might be a wake-up call even for the goat herders running the place.