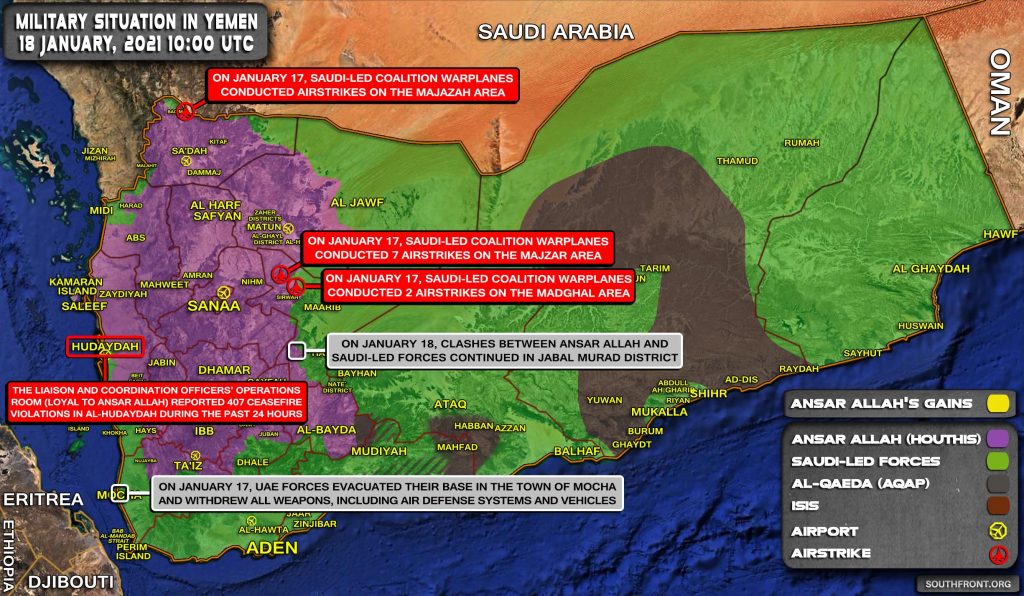 Forces of the Saudi-led coalition continue suffering from their setbacks in their battle against against the Houthi-led government of Yemen.

On January 17, UAE forces evacuated their base in the town of Mocha and withdrew all weapons, including air defense systems and vehicles. The evacuation took place as the Houthis stopped the attempt of pro-coalition forces to advance in central Yemen and once again reclaimed the initiative in the battle there.

According to local sources, the UAE and its local allies from the Southern Transitional Council are no more interested in the losing war with the Houthis. Instead, they are now regrouping in the south and is planning to secure its control of at least the southern chunk of the Yemeni coast. In these conditions, the chances of the Saudis and their puppet Aden-based government to somehow achieve the victory in the war in Yemen would decrease even further.

Frankly, the UAE and Saudi pimping losers are double FUCKED!

You’re being generous there …

This is such good news. I can smell the collapse of the potentates. Do I hear panic coming from the despicable despotic monarchs?

Is this a trap for the houthis? Has the coalition of evil( saudi uae and other scum bags) abandoned their troops in hodeydah?

I wasent expecting a collapse like this on the southwest front.

Lets wait and see, the houthis have the advantage for sure on the ground, wich is what counts, air power has its limits, mostly terrorizing civilian populations and destroying infrastructure. A specialty of the IDF and friends.

Money is not success, this saudi adventure is a testament to that.

Teach this episode to your children to show them money does not matter!

Is this a trap for the houthis?

However because Ansar Allah fight as a guerrilla force, chances are they will not follow like a conventional army. If they do, it will be a small advance force, so there will be some warning.

If they get caught in a trap, it will be the advance force.

The blessed Sunnah of the Prophet has been filled with many hadiths about charity that urge charity and sacrifice for the sake of God Almighty. فوائد الصدقة