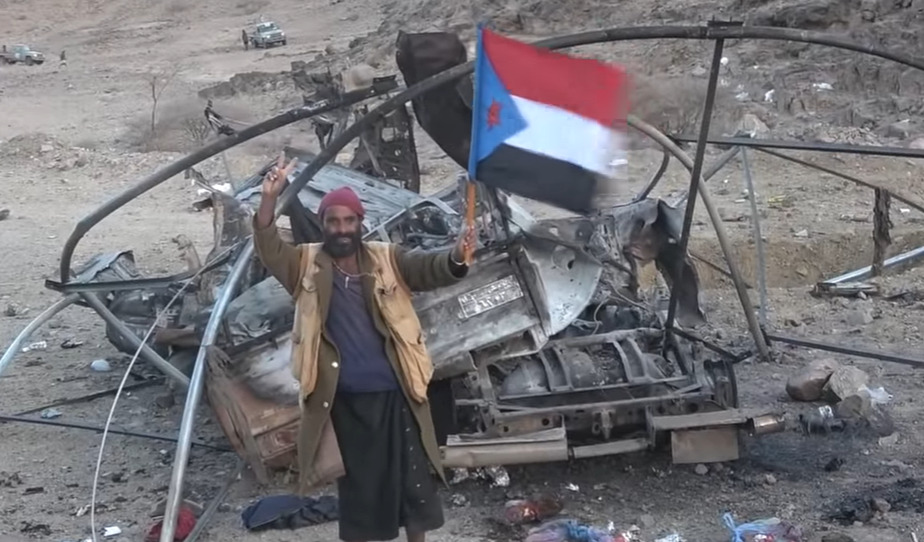 Screen grab from one of the videos released by the Giants Brigades’ Media Center.

On January 25, the United Arab Emirates (UAE)-backed Giants Brigades and other proxies of the Saudi-led coalition captured the district center of Harib in the central Yemeni province of Ma’rib from the Houthis (Ansar Allah).

Houthi forces in Harib showed fierce resistance, repelling at least three attacks on the district center on January 12, 14 and 19. However, ultimately they were overrun by the coalition’s proxies after sustain some heavy losses.

The Giants Brigades’ final push on Harib was backed by the Saudi-led coalition, whose warplanes carried out 67 airstrikes on Houthi forces in Ma’rib and the nearby province of al-Bayda between January 24 and 25. According to the coalition, the airstrikes killed 290 Houthi fighters and destroyed 43 military vehicles of the group.

#Yemen:#Shabwah #Marib:
Following the capture of Mablaqah #YNA & Giant Brigades took control of the center of Ain (عين) district. In addition, with the collapse of #Ansarallah, the troops took control over Jabal Shaqir & the town of Harib (حريب).
Map: [ https://t.co/jZQFNHYbT5 ] pic.twitter.com/jKNfZNqYve

After withdrawing from Harib district center, the Houthis blew up Aqabat Mal’a, a mountainous route that links Harib with the district of al-Jubah.

The Giants Brigades and other Saudi-led coalition proxies may develop their ground operation in Ma’rib and advance towards al-Jubah to push the Houthis further back.

The Houthis will not likely limit their actions to defensive operations. The group may escalate its drone and missile attacks. The UAE, which was targeted twice in less than two weeks, has been already threatened by the group’s media wing.

Stop threatening UAE and start actually attacking it, not shitty pin prick attacks, but full on!

Who lives in a house off glass, shoud not trow stones. So send all you have to the biutiful towers in Dubai

It’s the beginning of the end for the Houthis. It’s only a matter of time until Sanaa and the rest of Yemen are liberated ^^

Already stated 4 years ago and beyond, i think that there is even a copyright for that statement.

It appears the Houthis have been weakened by the vicious arms embargo enforced by America. Iran is having great difficulty smuggling weapons to Yemen. And the Houthis became over-confident after their many past victories.

The UAE never left all this while. It let Saudi Arabia do the fighting while it prepared the STO forces in Southern Yemen. After Saudi Arabia exhausted the Houthis with years of conflict, the UAE is now ready to move in.

The Arab coalition wants to force Houthis to the negotiation table. By convincing Houthis that victory over entire Yemen will be extremely costly, they can force a review of Houthi campaigns.

For the UAE to take this daring move that endangers its industrial and tourism sector, it seems the UAE has strong intel on Houthi capabilities.

Biden is the engine behind this policy. He wants to calm the Middle East to reduce the mounting threats to the stability of U.S puppet regimes. He’s engaging Iran and Turkey simultaneously to scale-back their support for Houthi and Sunni forces opposed to Saudi and the UAE. This explains the billions of dollar investment in Turkey by the UAE, and its outreach to Iran. China’s rise is a more pressing issue for America. The Middle East is a big distraction, but it’s indispensable due to the petrodollar pillar resting on Saudi Arabia and the UAE.

This is their last attempt to bring the Houthis to the negotiating table. Will they succeed? It depends on how powerful and motivated the Houthis are. It also depends on the nuclear deal with Iran and U.S easing pressure on Turkey. Saudi Arabia wants to get out of Yemen asap. The war is threatening the Al-Saud ruling family. America and the U.A.E are doing all they can to extricate Saudi Arabia from Yemen. All three actors will do their best to prevent a Houthi control of Yemen, but will work to facilitate an inclusive government. Turkey seems to support this idea. Only Iran opposes it.

the object
Reply to  The Objective