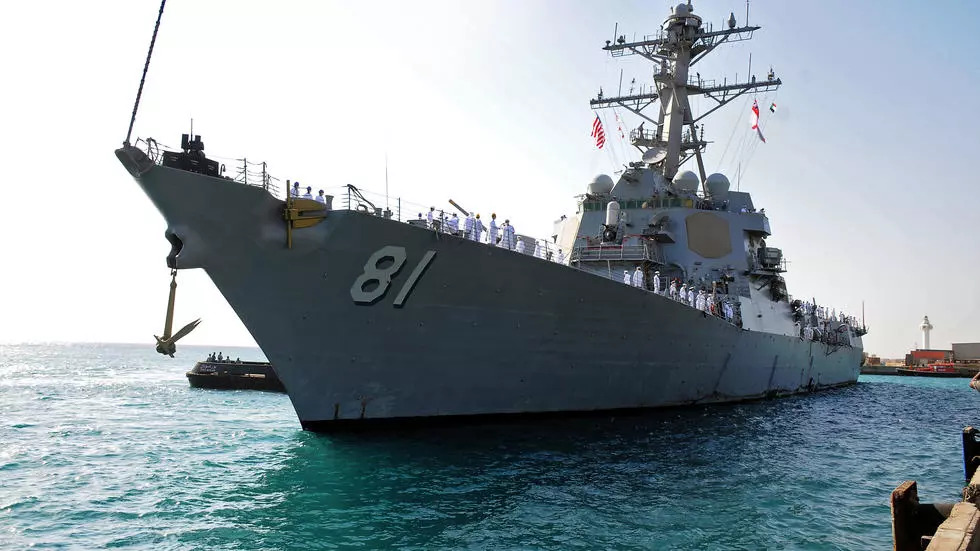 On March 1st, the USS Winston Churchill docked in Sudan.

“Together with Sudan’s civilian-led transitional government, we are striving to build a partnership between our two armed forces,” said Rear Adm. Michael Baze, director of maritime headquarters, Navy Africa, U.S. Sixth Fleet. “In just the past few months, we have already seen an increase in military-to-military engagements.”

“We look forward to fortifying our friendship through increased interactions at sea and ashore,” Baze said.

An expeditionary fast transport ship, the USNS Carson City, had already docked in the port on February 24, the “first US navy ship to visit Sudan in decades”, the US embassy in Khartoum said in a statement at the time.

It “highlights the willingness” of the US military to “strengthen their renewed partnership” with Sudan’s armed forces, it added.

The arrival of the USS Churchill was “the second (US) ship to stop in Sudan this week,” said US Charge d’Affaires Brian Shukan.

Its arrival, “sheds light on US support for a democratic transition in Sudan,” Shukan added, in a message on Twitter.

This is significant, since Sudan was largely forgotten by the US, until recently, when Russia announced that it was signing a deal to open a port in the country.

The USS Churchill docked shortly after Russia’s Admiral Grigorovich frigate arrived in Port Sudan, where the Russian navy said “a logistical support base” would be created.

The purpose of the base will be to “uphold peace and stability in the region”, according to the deal.

Russia’s navy will be allowed to keep up to four ships at a time at the base including nuclear-powered vessels. The base will be manned by up to 300 military and civilian personnel.

Russia will have the right to transport via Sudan’s airports and ports “weapons, ammunition and equipment” needed for the naval base to function.

The Red Sea naval base will be Russia’s first in Africa and only its second on foreign soil, after Tartous in Syria.

The US has its only permanent base in Africa in the port of Djibouti, 1,000 kilometres (625 miles) to the south, which overlooks the narrow strait between the Red Sea and the Gulf of Aden — a chokepoint for world shipping. Another country that has a naval base in Djibouti is China.

The games for African influence have begun, as it and the Antarctic are the newest points in which the US will compete with Russia, and also China.

Don’t believe Americans even when they bring gifts, but when you hear them talking about democracy and human rights, about peace and security, then run away as fast as you can, bombs are about to rain.

Agreed, and this is the main reason why:

Indeed, it is rigged all over.

Sorry guys, you’re late. Russia already have large naval base in Sudan. And preparations are ongoong for super-large one too.

So the new motto is America second?

the yankee-twats are second on the ball as usual – nothing much they can do about it. the russians are supreme strategists whereas the twats are at best trying to look beyond their own nose-tip and fail miserably over and over again.

the u.s. will preach the lgbt agenda to the sudanese children lol

People advocating for democracy really need to look at what lousy government it provides in many places. Like the US and Europe. Which are falling over each other to see who can do a worse job of mismanaging their governments. And victimizing their citizens.

What I’ve been advocating for decades is meritocracy. Where governments are judged by how good of a job they do. Not by what type of political system they use. The UN Charter of Human Rights is an archaic and subversive document eroding human rights. It should be updated by removing democracy as a human right and replacing it with meritocracy as a human right. Where people have a right to good government. Regardless of the political system that it uses.