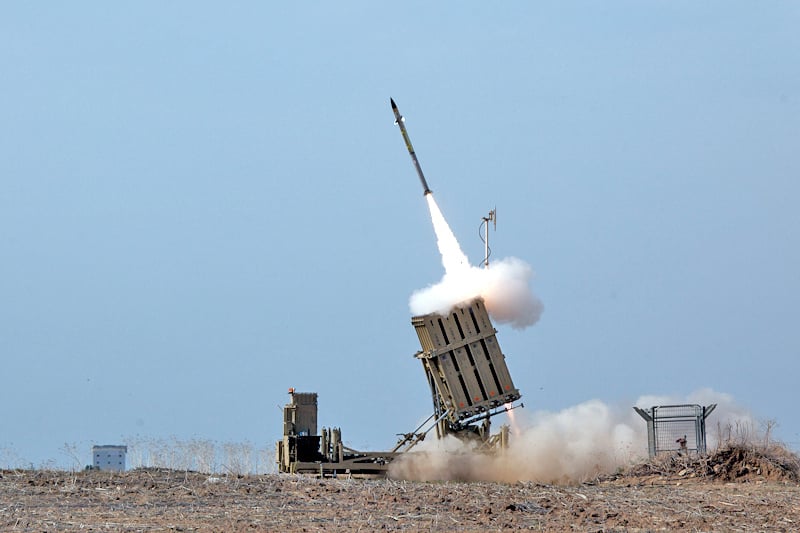 The United States is expected to being deploying the Iron Dome missile interceptor defense batteries to its bases in the Persian Gulf, according to reports by Arabic-language media.

This is likely because the Patriot largely doesn’t work, against drones, ballistic missiles, or anything at all, as it has become apparent.

The decision by US comes in wake of the Abraham Accords between Israel and two Gulf States, the United Arab Emirates and Bahrain. It also relates to two big weapons deals between the US and the UAE and Saudi Arabia, respectively.

The US currently has two Iron Dome batteries.

Tel Aviv also hopes to sell more of these systems to the US in the future, as Saudi Aramco’s destroyed infrastructure back in 2019 stand as evidence of the Patriot’s fabled “effectiveness.”

The Iron Dome missile interceptor system has been co-developed by Rafael Advanced Systems and IAI’s Elta Division. It is designed to protect populated areas and critical assets by neutralising short-range aerial threats.

The system has been in operational use for nearly 10 years in Israel during which it has intercepted more than 2,400 projectiles. The batteries include Rafael Advanced Systems-developed launchers and missiles and a radar array made by Elta. The contract features a command-and-control centre delivered by Amperst.

Back in December 2020, Israel also signaled that it was ready to skip the middleman in the face of the US and deal directly with its supposed enemies in the Arab states of the Persian Gulf.

Israel could be open to future cooperation on missile defence with Gulf Arab states that share its concerns about Iran, a senior Israeli official said.

But Moshe Patel, who heads the Israeli Missile Defence Organisation that is part of the Defence Ministry, said it was still premature to pursue any such deals.

“Things can be done, maybe in the future,” Patel told reporters when asked whether any of the systems might be offered to Israel’s new partners in the Gulf, or synchronised with comparable systems there.

“From an engineering point of view, of course there is a lot of advantage. That information can be shared, like sensors that can be deployed in both countries because we have the same enemies.”

As such, support for the Palestinians is supposedly there from the Arab states, but Iran as a common enemy is simply too overpowering for any sort of principles or integrity.

Frankly, this is great news for Iran as it can now capture them and reverse engineer. Let’s hope they are deployed in Iraq or Dubai.

This is likely because the Patriot largely doesn’t work, against drones, ballistic missiles, or anything at all, as it has become apparent.

We still don’t know if Iron Dome can do any better, Gaza homemade rockets and balloon can still go through and Iron Dome can’t cover much and no one yet hit Zion terrorists with ballistic missiles or good drones yet. So the stupid Wahhabi gonna be test rats for goys…LOL, poor fuking Wahhabi that can’t do anything getting looted by yankees and Zion LMFAO.

Persian Gulf is quite big so where will the Iron Dud be placed so that the loitering ammo can be programmed :)

Not going to help them. If they want to be safe from attacks, best thing they can do is to leave the region for good.

Oh, and the missile over Riyadh that Saudis pinned on Ansarallah? Turned out the missile was fired by Iraqi resistance!! Ansarallah said it wasn’t them and they never lie.

In response to suicide bombing of two Saudi nationals, they targeted the “Royal” palace. Truly a civilian target! Iraqis warned Saudis AND Emiratis that if such attacks repeat, resistance will burn their palaces over their heads, saying you can’t murder innocent people in markets or their homes and be sound and safe in your palaces, those days are over. Now Saudis and Emiratis are threatened from south and north. Continue this stupidity and you’ll be finished by the mighty north-east. In highest level of decision making in Iran, it is decided to change Iran’s approach from trying to make peace at any cost (Zarif-Rohani policy) towards our southern troublemaker neighbours into dealing with them the way they’d understand and won’t perceive as weakness.

The axis of resistance must create a way to by pass the food blockade in Yemen. Perhaps Russian naval base in Sudan can help facilitate these shipments.

Russians won’t do it, period. They even condemned some of Yemeni attacks on Saudi installations. Russia doesn’t owe anything to the resistance axis and vice versa. They have their own geopolitical goals and helping Yemen is not one of them. They have their own set of problems.

Blockade of Yemen will be broken soon. Now Iran is bound by law to send shipments of food and medicine at least every 3 months. Maybe this move causes other countries to grow a pair and help where it’s really needed.

Indonesia detained two tankers, one under Iranian flag and the other one Greece or Panama, for “illegally transferring oil”. How is it illegal, one is seller with known origin and the other is buyer, your guess is as good as mine (perhaps they gave in under pressure from South Korea and the US). But one thing is sure: This was a bad move!

The US Coalition of Terror has much to lose as even in the US there are circa 75 million people who despise and fear the government.

In the US allied Arab states there will be much killing as soon as the monarchies are feeling the pain directly.

The Iron Dome will not help the princelings.:)

Iron Dome is a overrated system like the Patriot. A more realistic approach for US was to have a ground based evolved Sea Sparrow currently deployed on ships. This is a PR BS move to promote Israeli weapon systems on the arms market.

Israel flies right by S400 with impunity. the bias is so thick on this site and the comments are always detached from reality Even Saudi has been knocking down Iranian missiles regularly with patriot where as Russian systems are able to be monitored in real time as they are knocked out. did you all forget the Israeli technology that was knocking out Armenian S300s Its not like the genius commentators on southfront are going to be inventing anything but a stone club anytime soon.Reverse engineering….dumb people cant reverse engineer anything. Al this enlightenment and you guys can figure out how to cover sand in blood Lets not forget folks, Aisha says only women married to the followers of the non prophet are beaten and bruised, thats who you are, Thugs Israel is gonna kick your ass back to the stone age