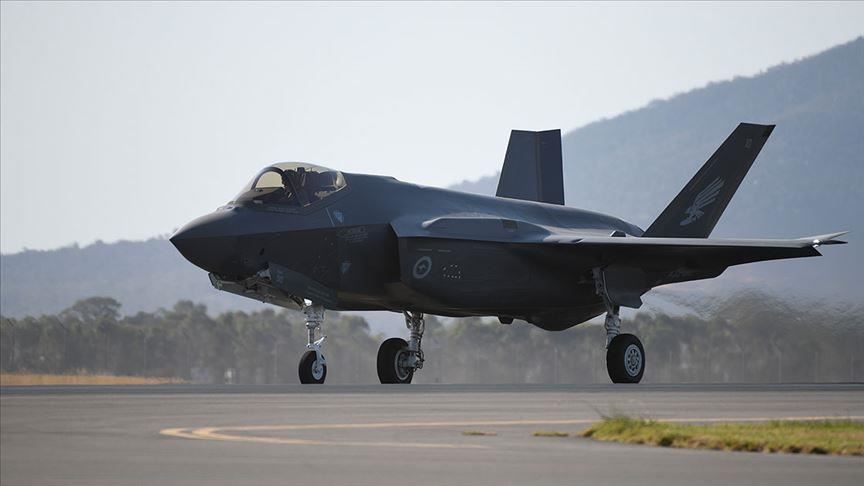 The US Department of Defense stopped training flights on the F-35 for Turkish pilots at the US air base in Arizona, Reuters reported on June 11th.

“The department is aware that the Turkish pilots at Luke AFB are not flying,” Air Force Lieutenant Colonel Mike Andrews, a Pentagon spokesman, told Reuters. “Without a change in Turkish policy, we will continue to work closely with our Turkish ally on winding down their participation in the F-35 program.”

The policy in question is Turkey’s purchase of S-400 missile defense systems from Russia and it sending personnel to be trained on using it.

According to an unnamed US official, a local commander at the Luke airbase decided to halt training for the Turkish pilots.

According to media reports, on June 6th, US Acting Defense Secretary Patrick Shanahan sent a letter to Turkish Defense Minister Hulusi Akar saying that all Turkish pilots in the program must leave the U.S. by July 31 and training for new pilots will be suspended.

The U.S. has already suspended deliveries of parts and services related to Turkey’s receipt of the fighter jets.

“You still have the option to change course on the S-400,” Shanahan said in the letter.

There are currently 42 Turkish military personnel training at Luke and Eglin — four pilots, and the rest maintainers. The July 31 deadline would allow 28 of them to complete their training, but the remainder would be sent home before their training naturally concluded, according to information attached to Shanahan’s letter.

Turkish Defense Ministry released a statement in response to Shanahan’s letter on June 8.

“A letter was sent by US Acting Secretary of Defense Patrick Shanahan to Turkish National Defense Minister Hulusi Akar. Covering defense and security issues between the two countries, the letter expresses the expectation of finding a solution to the existing problems within the framework of strategic partnership and maintaining the comprehensive security cooperation and emphasizes the importance of continuing negotiations,” the statement said.

The US wants Turkey to purchase the Patriot missile system rather than the S-400, but Turkish President Recep Tayyip Erdogan said that the US hasn’t given Turkey an “offer as good as the S-400s.”

In an off-camera press briefing on June 7th, officials from the US Department of Defense spoke about the Turkey S-400 issue. Under Secretary of Defense Ellen Lord and Andy Winternitz, deputy assistant secretary of defense for Europe and NATO spoke to reporters.

Ellen Lord had the following to say:

“The United States greatly values the U.S.-Turkey dialogue and our strategic partnership.  However, the United States was disappointed to learn that Turkey sent personnel to Russia for training on the S-400 system.  The S-400 is incompatible with the F-35.  As we have very clearly communicated at all levels, Turkey will not receive the F-35 if Turkey takes delivery of the S-400 system.  Thus, we need to begin unwinding Turkey’s participation in the F-35 program.”

The winding down would happen in an orderly manner, so as not to cause any heavy disruptions.

“To facilitate an orderly cessation of Turkish participation in the programmatic management activities of the F-35 program, Turkey will not participate in the annual F-35 Chief Executive Officer Roundtable on June 12th, and planned updates to the program’s governing documents will proceed without Turkey’s participation.  If the United States and Turkey cannot reach a mutually-agreeable resolution to this issue by July 31, all Turkish F-35 students and instructor pilots currently in the United States will be required to depart the country.”

According to Andy Winternitz, July 31st was not the date when the entire F-35 program would end for Turkey, but rather when it would start unwinding.

“But obviously, the United States greatly values the U.S.-Turkey relationship.  It’s a strategic relationship.  They are our ally, and our relationship is multi-layered.  We’re doing a lot of things with Turkey across the — the entire spectrum of our — of our security relationship, and — and that’s — and that will not end at all.  That won’t be influenced, we hope, by what’s going on right now with the S-400 and the F-35.”

Reporters also asked who Turkey would feel threatened by when it’s a part of NATO and its principle enemy was the Soviet Union and now Russia.

My question is, in all the discussions with the Turks over the S-400s and their needs, their anti-missile defense needs, have the Turks ever identified or suggested who they feel the threat is likely to come from?  I ask this because NATO is designed, of course, to combat the Soviet Union and Russia.  And so to — to me, it’s — it seems a little puzzling that the — the logical threat to them would come from Russia or an ally of Russia, yet they’re relying on a Russian system.  Have you ever talked about who they thought the threat was going to come from?

Winternitz:  Well, hey, listen, Turkey’s obviously in a — in a very tough neighborhood, and so they — I think they face threats from a — from a number of places, and — but they have — they’ve identified this as a security need. And we have — we are willing to discuss with them a solution that does not involve the S-400 as — as soon as they’re ready to discuss that — you know, that with us.”

The turks have to stop playing both sides : either they stop being a Zio-yankee puppet in NATO or they fully join the Russian-Arab-Iranian-Chinese axis. They cant expect to buy the S400 and still act like business as usual within NATO. If Erdogan and co continue on this road, theyll lose both sides.

not when they have england at their side, who in extent controls the colonies. Think again and see the game is played, with main target the russians.

What makes you think England is on their side?

learn history and also follow the news and you have your answer. kid I know never assume, as you do.

No matter how much I could learn, I would never be a genius

Turks seem to enjoy being a tool in British games. What is funny that most of them still can’t realize whats going on.

they been a tool for the city of London and her queer zionist puppet Attaturk since the beginning of their existence, and they are very few in turkey who dont know that, as the turks are just like the Greeks, political mindless animals.

That be since the crusaders, destroy Byzantium defenses from within and open the road to their khazars partners to take down Byzantium and create turkey.

UK is more or less powerless nowadays and are making a joke of themselves with their fake brexit.

Turkey is never going to choose, Turkey only chooses interests. Turkey will use both Russia and America for it’s interests

You can call me Al
Reply to  ╭∩╮( ͡ʘ ͜ʖ ͡ʘ)╭∩╮

and end up on it’s own, in a big, bad World that generally hate Turks….. how’s that going to play out for you Kebab boy ?.

the quickly disintegrating states of A will fold, since they can’t really allow Turkey to brake away. it will be a loss of face for trump but there you are, they can’t afford a nato without turkey.

It’s not that easy, Turkey doesn’t want to become the next Iraq, the US is a vengeful master.

Even though I think your inclinations are faulty, I agree with your reasoning. They will end up being burned by both sides. I could not happen to a better country.

Imagine being this much of a slave to the burgers and the Israeli regime.

you are talking about americans then

US sources have been saying how the S-400 can’t detect the F-35 let alone shoot it down so why is it such a risk to the F-35 that the USA is risking losing NATO’s second biggest military located in perhaps the most important strategic position in NATO over what has been described as ‘soviet junk’. This is an opportunity for the USA to show once and for all how superior ‘stealth technology’ is compared to Russian air defences for all the world to see and they are scared to allow it. If the F-35 could be proven to be able to defeat the S-400 the USA would double their sales overnight but instead they’ve lost a sale to Turkey and lost a manufacturing partner which will increase cost per plane to the US taxpayer.

and the sale to germany it seems, which is one reason why dunny the dunce is so pissed off with angela. but he managed to sell the german ‘rejects’ to japan instead. you can’t have a hole in the profit calculations from unsold material.after all, war is profit for lockheed martin and so on.

Good who needs those insane expensive Jets anyway. And the most important thing is that not even the US or anyone flys them. They are just expensive electronics for business making. Do you know that for 2 hr of F-35 flight the Jet needs full 24 hrs of maintenance. Cost per flying hour to $25,000.Oh yes and the Helmet of the F-35 is incredible $400,000! LMAO.

Israel flies them, the US does and the Netherlands does.

The F35 is grossly over priced and not very good. Turkey could obviously buy more cost effective planes from Russia China, or even France.

The problem is Turkey has paid for the planes, and the US will not refund the money. However in the long run it will still be cheaper for Turkey to buy other aircraft, because of the staggering maintenance costs of the F35.

The way the US has forced the F35 on its client states is a great military advantage for Russia and China.

Turkey is building to mini air carriers. If no F35, the billions poured in those two ships will be lost as there will be no replacements available. They will end up with two ships unable to carry out for what they were being build.

The might use the ships as helicopter platform, which is not even close in projecting power.

The US is doing Turkey a favour. It must pain Lockheed Martin and the MIC to lose sales for what to this point has been an overpriced flying turkey of an aircraft.

Several countries already offered to take those planes. The Netherlands might want to have a dozen or two more also.

What?! Are they for free? I’ll take a couple too.

Nothing is free. Neither will those planes. The advantage is that they are already in the planning so will have a relatively short delivery period.

Screw the turkeys don’t give them anything , no more handouts .