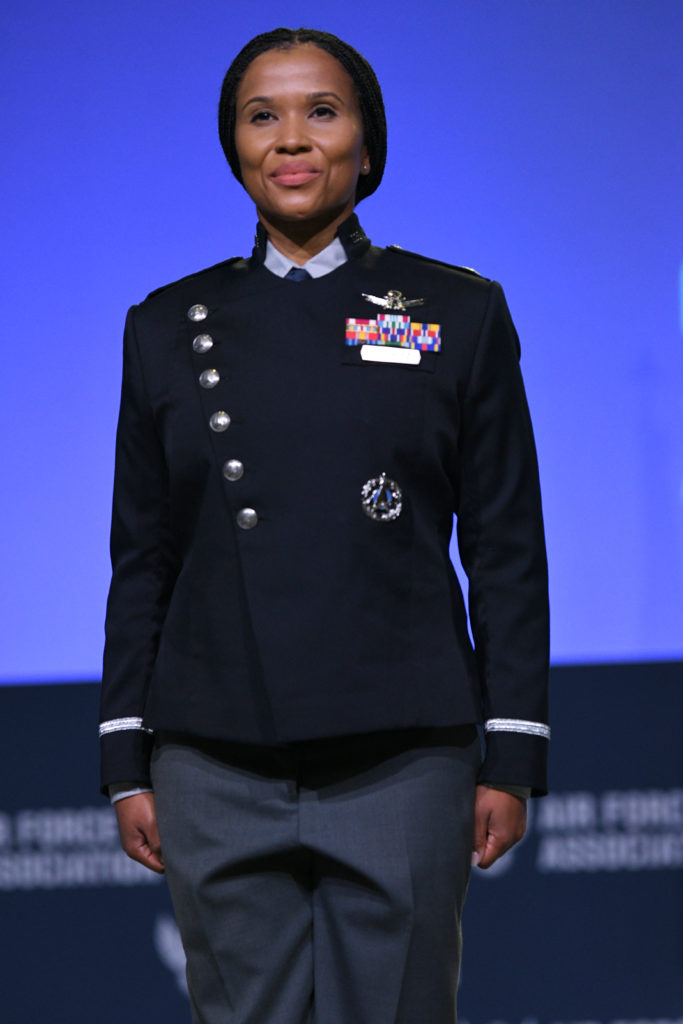 The US Space Force unveiled the prototype dress uniforms of its Guardians (as it appears Marvel hasn’t sued them over copyright of the name, or Viacom over nicking the Star Trek logo).

The dress uniform features a dark navy color, an upturned collar, and a diagonal row of six buttons.

During a speech at the Air Force Association’s Air, Space & Cyber Conference in National Harbor, Maryland, Chief of Space Operations Gen. John W. “Jay” Raymond called two Guardians onto the stage to showcase the prototype. He noted that the service is open to “comments and tweaks” in the coming months before the uniform goes into wear testing.

The coat’s six silver buttons, according to Raymond, are meant to represent the fact that the USSF is the sixth branch of the U.S. Armed Services. Photos released by the official USSF Twitter account reveal more details, including the service’s delta emblem on the buttons and mirror-finished “U.S.” pins on the collar.

Raymond also revealed the USSF’s physical training uniform, which is being wear-tested. A video shows the uniform and a gray T-shirt bearing the stylized words “Space Force” in white on the back, and black shorts with the delta emblem in white.

Regrettably, the US Space Force didn’t “borrow” the uniform from Star Trek, since if there were “Redshirts” it would be easy to guess who the replaceable “Guardians” are. There is still hope for the “combat” uniforms to be separated into red and blue shirts, however.

Still, it is a complete rip-off of the Battlestar Galactica uniform. Copyright means nothing for the US military.

A friend just texted me: “Tell me the space force uniform isn’t a complete rip-off of battlestar galatica” and reader— https://t.co/UEyvBY573A pic.twitter.com/8teKYBPWC5

But it also strongly resembles a dress uniform worn by William Shatner in the first-generation Star Trek.

The uniform announcement comes after USSF Chief Master Sergeant Roger A. Towberman showed off the new insignia on social media.

“The delta is the foundation for all USSF enlisted insignia,” read an infographic shared by Towberman. “The six-sided border surrounding the insignia represents the USSF as the sixth branch of the U.S. Armed Forces.”

According to Towberman, each specialist stripe represents “terra firma, a solid foundation of skills” upon which Space Force operations are built. Changing the straight stripes to chevrons at higher ranks symbolizes the change Guardians go through as they take on greater responsibilities.

“The placement of the Delta above the globe further signifies this higher level of responsibility, while the Delta breaking through the orbits shows their willingness to explore and innovate,” he explained.

It is still incredible that any of these commanders can present the uniforms, insignias or other features of the Space Force with a straight face. Additionally, the US Space Force is still to have its first deployment in space. It already had success in being deployed to Qatar, which just repeats past “successes” of the conventional branches of US military.

The most idiotic uniform design ever seen. But fits the purpose to easily identify the idiots.

The end
Reply to  Selbstdenker

Well it could be a nice costume for halloween, right?

You can see it’s gonna be gender-neutral, too. Goddammit, military culture is a fucking joke these days.

Only in western, transgender liberal societies.

You wish to avoid the truth. If you did credible research, you’d investigate further. https://marquee.blogs.cnn.com/2009/03/17/battlestar-galactica-at-the-un/ Why would the cast of Battle Star Galactica visit the United Nations and give a speech to all nations about the threat of AI? Wake up. More of this “fiction” is truthful than you want to know.

Evil Americ*nts and all their allies are not allowed into the cosmos by all the other advanced peaceful civilizations in the Universe. This is due to their non-benevolent and bellicose nature. As such, they are quarenteened here on Earth and can not leave the planet. So, whatever happened to their Space Shuttle program???? The 2 Space shuttles that blew up were in reality warnings by other advanced races to back down. Same goes for those Musk Space-EX rockets that keep exploding. This is just more stupid Hollywood theatre for the gullible masses.

Yeah mannn…. Because that’s like totally like way better than just telling the truth about what you have been doing with your orbital and deep space launch vehicles since the 1950’s…. Dude…. Bigly…. O.o

if you’re salty about what USA did, you’re going to loose you’re marbles when you learn what the Germans and Japanese did.

I vote let’s have another beer (or two) and see what these dipshits try to sell us next.

What a crock, and a waste of U.S. taxpayer money. The insignia is a rip off of Star Trek, and those crap uniforms are indeed looking a lot like the remake BSG ones. The military industrial complex loves to spend other peoples money. This ridiculous race to militarize space is like Dr. Strangelove. The scene at the end of the movie where they are all arguing about not letting a mineshaft gap happen between the U.S. and the Soviet Union. Hysterical!

And they already have aliens in their ranks, just look at that ugIy biatch lol

she shat her pants already