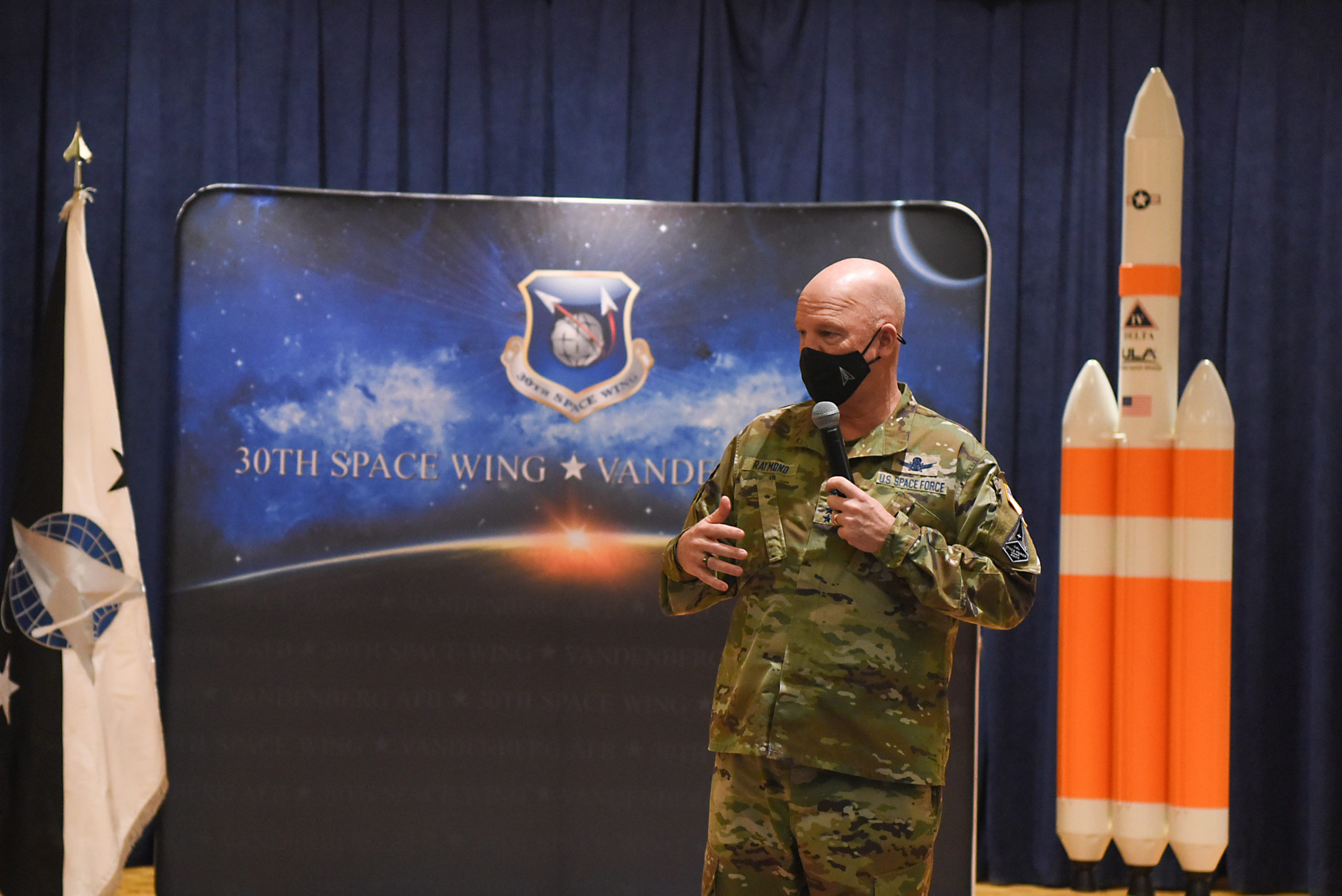 The United States Space Force will reform its acquisition organization under the new “Space Systems Command”, in the summer of 2021, Chief of Space Operations Gen. Jay Raymond said.

Under the restructuring to speed up new technology delivery, Space Systems Command (SSC) will replace the Space and Missile Systems Center (SMC), elevating its responsibilities to a Space Force Field Command.

The new organization, headquartered at Los Angeles Air Force Base, will be charged with developing, acquiring, fielding and sustaining space capabilities.

The SSC will launch the Space Force’s new satellites, test them on orbit and sustain the constellations. Some additional Air Force units will transfer into the Space Force, but the reorganization does not include transfers from the other services, as had been suggested earlier.

“Space Systems Command’s organizational structure was purpose-built to anticipate and be responsive to the challenges presented by a contested space domain,” said Chief of Space Operations Gen. Jay Raymond in a statement. “We took the SMC 2.0 transformation of 2019 to the next level, aligning missions and organizations, and pushing authorities down from the three-star level to lower echelons in order to reduce cost and go fast. This will allow us to move at speed in delivering the resilient space capabilities necessary to stay ahead of a growing threat.”

“With the re-designation of SMC as SSC, we will further build upon the success seen with SMC 2.0, while synchronizing the science and technology research, capability development, system production, launch operations, and system sustainment efforts to more effectively deliver cutting-edge space systems needed to ensure the future of our national security and prosperity,” added SMC Commander Lt. Gen. John Thompson.

SSC is the second of three new field commands to be established under the Space Force.

The SSC is different from earlier plans, since it will not include the Space Rapid Capabilities Office and the Space Development Agency.

That enterprise will be its own office under SSC.

The Space Force presumably will also assume the SMC’s budget of about $9 billion annually and a workforce of about 6,300 military, civilian personnel and contractors.

About 4,000 people who work for the space launch units at Patrick Space Force Base, Florida; and Vandenberg Air Force Base, California will be reassigned to SSC. Both space launch wings currently report to the Space Force’s Space Operations Command.

Hopefully, the Space Force might actually end up in space at some point or another and not just in Qatar or elsewhere on planet Earth.

Ahahaha, they changed a name to something that exists only in dreams, to make it look more real, but how crazy these Yankee are?

Covid as a cover for the CIA to kill Americans at will.

Covid provided a cover for the CIA to distribute poisons to close to 99% of American restaurants. Thus the CIA can poison anyone at anytime. They do not have to break into your home to poison you. In the old days of Malcolm X and Martin Luther King, the CIA had agents shoot the target. It was becoming obvious not just in the USA but globally that those were state sanctioned murders. Thus the CIA switched to the new method of poisons. This is why Covid had a protracted expansion in the USA while China was able to control Covid-19 after a few months. The CIA did not believe the Chinese or Russians would be able to develop such good vaccines. The CIA was hoping it would use vaccines to steal mineral resources from poor countries (we will give you Covid vaccines if you give us your oil or minerals type negotiations).

This is a brilliant way of executing people who the CIA see as troublesome. Poisons are distributed to American restaurants without the owners or managers knowing those are actually poisons. A text message goes out to the chef, manager or waiter when a targeted American goes to eat. His or her plate is laced with the thick colorless odorless poison which starts to work approximately 2 hours after eating the meal. The target goes to see his doctor who says he has abdominal ischemia (pain out of proportion to physical findings). All medical tests come back normal. The gastroenterologist is left baffled, especially if the patient complains “the CIA is poisoning me” This is now encoded in US Medicine as a sign of mental deficits (delusional disorder). However I found this to be a cover since so many Americans have this problem who are otherwise normal in every other way. This continues until he or she gets dead bowel and its all downhill from there. STATE SANCTIONED MURDER!

How Chavez the former president of Venezuela was killed: Same poison, but when he saw his doctor, the doctor lied to him that he had cancer. In the process of Chemotherapy, his medications were laced with heart stopping medications.

I had a female friend try out one of the foods from the restaurants meant for me. She had severe abdominal discomfort and was angry I allowed her to try it. I told her this is the secret of the CIA’s success in poisoning Americans. Just call it a conspiracy theory while killing the targets. The dead targets make no statements.

Ever since I stopped eating in restaurants, I have had no abdominal discomfort. The truth is the CIA now uses ordinary restaurants in America to kill people. That dream has been proven. This will also be one of the accusations that would be filed against the CIA in the future during the trials which will see those agents executed.

How I Got into trouble with the Central Intelligence Agency.

My life now is hard. Any restaurant I walk into in the USA regardless of the city, a text message with my picture gets sent to the chef, owner or waiter for a few drops of a clear looking liquid to be sprinkled on my food. This chemical causes severe stomach and gastrointestinal discomfort enough to have concerns of a myocardial infarction.

How did I earn this new role in the USA? By simply using an unfortunate ability I thought was cute when I was a child but now has made me live a life of misery. When I go to sleep most nights I see things around me like women having babies (as a kid my neighbors used to walk up to me to ask if they were going to have a boy or a girl. This was before ultrasound in a developing country). I also see global events , murders and destruction. Always something todo with new life as in babies or death as with wars.

I have tried to see lottery numbers or positive things however for some reason I don’t. Only things affecting me personally.

Unfortunately I found the CIA committing murders and planning plane crashes, wars, creating terrorists like ISIS or Boko Haram. The CIA using the world bank and the IMF to impoverish millions leading to the death of children. I wrote about the IMF as it affected a country of interest and hence the CIA zoned in on me.

I wish I never had this ability. I wish I was a plane Joe. Now despite my honesty and hard work, the CIA has stolen any chance of me getting into a medical residency. So I am a doctor without the ability to practice as one. Instead I work as an assistant while the CIA constantly make plans for me to lose such jobs. I move from city to city with the same outcome. This is my miserable life all because of my God given abilities.

One would think the CIA would use my ability to prevent disaster but no, those retards only have more stupid ideas that ultimately leads to the end of the USA.

If it is any consolation to those who have been terrorized by the CIA, the CIA will have a horrible end. Several CIA agents, handlers and managers will be tried and publicly executed. What I saw were beautiful women and handsome tall men who turned out be be CIA killers. Those agents cried and begged for their lives as they died. Many CIA agents spilled everything they knew trying to save themselves. Most were executed a few imprisoned. The CIA was designated a WESTERN TERRORIST ORGANIZATION.

This is the future. It will happen.

Covid did not damage China as I predicted correctly.

I am correct. Ridicule it as much as you want. I assume you are one of the sentinels watching. AMERICANS don’t waste sleep at 3 am.

The future of the CIA is fixed. The CIA has a horrible ending just like the SS of NAZI Germany. Public executions

There is no such virus. The medical tyrants simply renamed influenza A & B as covid. It’s all about control and profit.

Oh yes, we soon will see the rials, liras and rubels go up.

Even the shekel will go up. They got the idea and made it come through, but as usual the usual ones take the main part in corruption and when needed by UN and even UNICEF.

You probatly has counted them Yourself several times.

Public executions? I hope so. I’d also include the FBI.

Lots of people get premonitions. You’re not that special.

There are other plans. One is to change dollars into lira, rial and rubels and lower the climate change by lower but alos much more ineffective activities.

They will try to learn already lazybums to sit on their hands only.

you are a psyop! You are here to sound crazy, speak SOME truth and sprinkle it with crazy! Therefore poisoning the truth and therefore labelling the truth as “Conspiracy”!

It would be no different to a Qanon follower suddenly declaring the earth was flat! This would be called “poisoning” and good analysis with a bad theory!

You are here to add crazy to truth. We call your kind “pied pipers”!

Pied pipers are the bottom of the barrel of scum!

The U.S gestapo weaponizing the space is a pretty bad idea for everyone on the earth.

The woke US space force :)

Another colossal waste of resources! Only America can do this since we are propped up by the rest of the world.

You’re missing the bigger picture. These announcements are just formalities for something that has been operating for a decade or so already .

This will allow us to move at speed in delivering the resilient space capabilities necessary to stay ahead of a growing threat.

The ‘threat’ is that a satellite can be taken down with a single missile or bullet (or rock, bolt, used battery, sardine can, etc.). There’s no real defense against that except elaborate anti-missile schemes which are severely limited. All U.S. satellites will be targets for Russia and China if we piss them off enough. I’m sure they have the capability. The only way for anyone to eliminate a threat to their satellites is to pre-emptively destroy everyone else’s potentially weaponized satellites and spacecraft first. Which will result in a nuclear war. Just what we needed – another excuse.

are you aware of any space defenses at all yet by any nation? or offensive systems? it appears that there is no threat until we start threatening….? just more mil-spec contracts to start up for more taxpayer dollars…

The best time to counter imaginary weapons is before they even exist. The best response now is to throw dumpsters of imaginary taxpayer money at a non-existent solutions before it’s too late! In fact, we may already be doomed. Maybe we should just pre-emptively surrender to confuse the enemy.

lol ikr…it would be absolutely hilarious, if this wasnt the status quo

In the Death Star, a design by Reagan Government, that was kept in secret! Beware Russians! Hahahaha