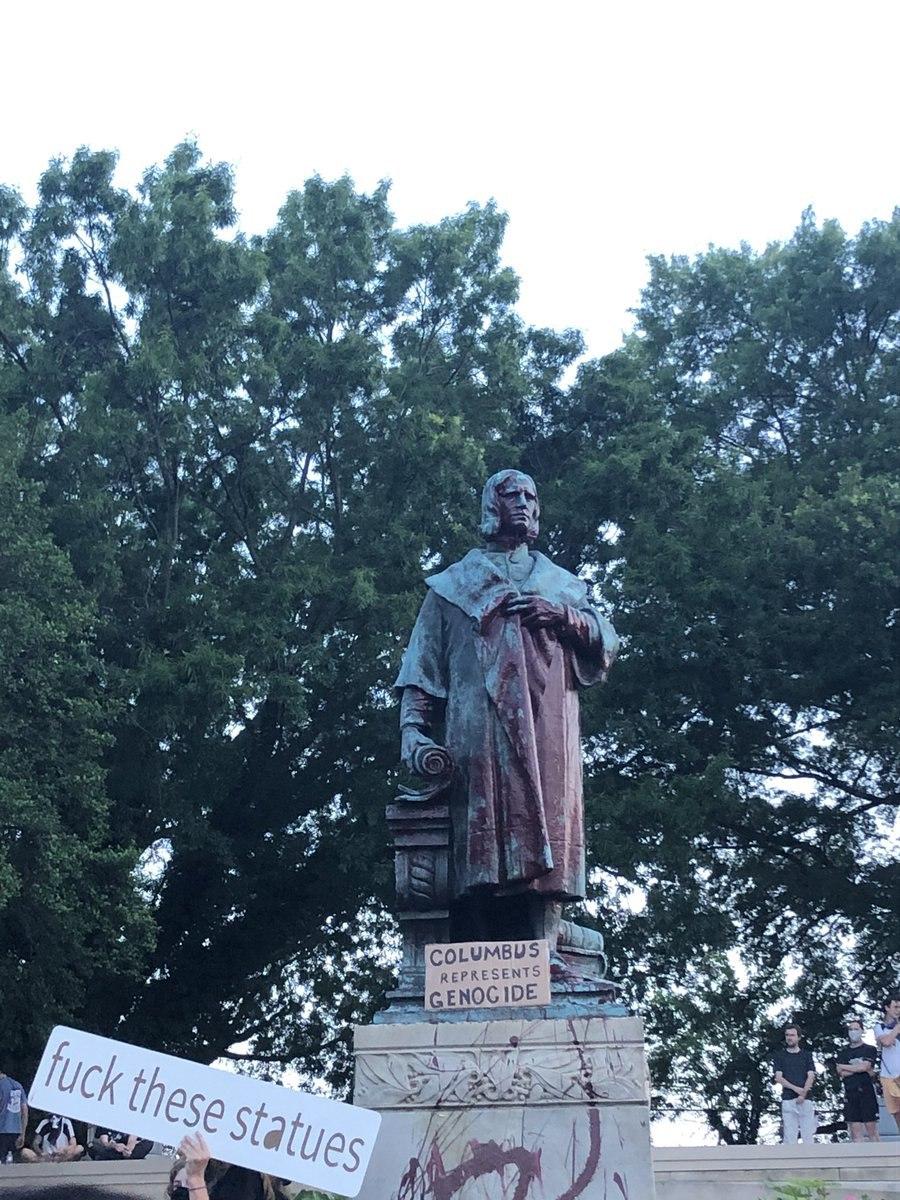 On June 9th, protesters in Richmond, Virginia tore down a statue of Christopher Columbus and threw it in a lake.

It happened at Byrd Park in the city, following a peaceful demonstration outside of the statue in honor of indigenous people.

Shortly afterwards the statue was torn down, spray painted, set on fire and thrown in the lake in the park.

At the height of the destruction, agitators attacked photographers, demanding they leave the scene.

According to protesters, Columbus represented genocide and racism.

US President Donald Trump went to Twitter and said that the 75-year-old protester who was pushed to the ground by police officers and was bleeding was likely an Antifa supporter.

Buffalo protester shoved by Police could be an ANTIFA provocateur. 75 year old Martin Gugino was pushed away after appearing to scan police communications in order to black out the equipment. @OANN I watched, he fell harder than was pushed. Was aiming scanner. Could be a set up?

The Washington, D.C. Council, the legislature for the United States capitol, unanimously passed an emergency bill to reform policing in the city.

The measure bans police from using chemicals such as tear gas and pepper spray on protestors, as well as “less-lethal projectiles” like rubber bullets and stun grenades. It also makes it unlawful for police to restrain someone by the neck, as in a chokehold.

The bill also prevents the Metropolitan Police Department from hiring law enforcement officers who were fired from a policing job in another jurisdiction, or resigned ahead of pending disciplinary action or termination.

In more questionable moves, HBO Max pulled “Gone with the Wind” from its library of films.

The 1939 film, which tells the love story of Scarlett O’Hara and Rhett Butler during the American Civil War, is considered by many to be a cinematic classic and is one of the most popular films ever made.

The film’s portrayal of slavery, African Americans and the Civil War South has been received much more critically in the decades since its release.

A spokesperson for HBO Max said that “Gone with the Wind” is “a product of its time and depicts some of the ethnic and racial prejudices that have, unfortunately, been commonplace in American society.”

These racist depictions were wrong then and are wrong today, and we felt that to keep this title up without an explanation and a denouncement of those depictions would be irresponsible,” the spokesperson said.

The spokesperson added that when the film returns to HBO Max, it “will return with a discussion of its historical context and a denouncement of those very depictions,” and will be presented “as it was originally created, because to do otherwise would be the same as claiming these prejudices never existed.”

“If we are to create a more just, equitable and inclusive future, we must first acknowledge and understand our history,” the spokesperson said.

This followed an opinion piece by John Ridley, screenwriter of “12 Years A Slave” published in Los Angeles Times calling for HBO Max to remove the film.

“It is a film that glorifies the antebellum south. It is a film that, when it is not ignoring the horrors of slavery, pauses only to perpetuate some of the most painful stereotypes of people of color,” Ridley wrote. “The movie had the very best talents in Hollywood at that time working together to sentimentalize a history that never was.”

Ridley made it clear that he didn’t want “Gone with the Wind” to be “relegated to a vault in Burbank,” California, but rather be taken down for a “respectful amount of time.”

“Let me be real clear: I don’t believe in censorship,” Ridley wrote. “I would just ask, after a respectful amount of time has passed, that the film be re-introduced to the HBO Max platform along with other films that give a more broad-based and complete picture of what slavery and the Confederacy truly were.”

Ridley added that the film “could be paired with conversations about narratives and why it’s important to have many voices sharing stories from different perspectives rather than merely those reinforcing the views of the prevailing culture.”

In the UK, protesters struck out Sir Winston Churchill’s name under his statue and wrote down that he was a racist, causing a bit of controversy around one of the people responsible for actually winning World War II against Nazi Germany.

In the same vein, Queen Victoria’s statue in Leeds’ Woodhouse Moor was defaced with “BLM” and “Murderer.”

A statue of Queen Victoria on Woodhouse Moor has been sprayed with Black Lives Matter graffiti.

The Queen Victoria statue, which originally stood in front of Leeds Town Hall.

It is better to be racist than some monkey or liberal white jew tearing down all the highly achieved white people statues.

As long as the protesters dont touch our International usury Order, they can throw all the statues in the Sea they want for me……………………….LOL.

How much is that statue worth, if you fish it out and sell it on the Black Market? Which no doubt they have planned and customer waiting.

Bristol UK did same at weekend.

BLM/Anti-fa, funded by $oro$. BLM donations, allegedly go back to the Democratic Party, whose Godfather is $oro$.

Fantax
Reply to  AM Hants

I think the statues have little value, they are usually little more than a century old. Nothing compared to what ISIS earned stealing and selling archaeological manufacts from sites in Irak and Syria.

AM Hants
Reply to  Fantax

Who funds ISIS? Why can you never tell the difference between them, Ukraine Nanzis, Anti-fa or BLM? Uniform, style, tactics, banners, etc, etc, etc.

You can never tell the difference between any of them.

Raptar Driver
Reply to  AM Hants

Bill Wilson
Reply to  AM Hants

ISIS is an organized criminal operation that raises money any way it can.

AM Hants
Reply to  Bill Wilson

With a lot of funding from our Governments.

you seem to be a poor man, otherwise you are welcome to match Soros pound for pound in donating to your preferred cause

Asking the value of the statue?

Owing to see what the same Mobsters do with the artefacts of the Middle East. They loot, for their customers.

So by asking if BLM and Anti-fa do the same, I am a poor man? With regards the $oro$ World of philanthropy, I do believe he gets all and more back, from the tax payer, courtesy Government Funded Aid.

Pieces of culture and history. The war is clear, the targets are identified. Cant believe we in the 21st century are witnessing cultural and historical destruction as well as the most severe censorship of ideas.

what is wrong with that? Columbus was a master of cultural and historical destruction, to the extent he became a genocidiare. the world will never accept the narrative of white supremacy, never ever

Columbus was the founder of White colonialism in the new world. For this he deserves some recognition. Sure he was a racist and a profit driven person. Aren’t all Americans regardless of race?

Dont conflate your envy to inequality. The man did what no one did. He advanced (white??? this is ridiculous) human navigation altogether.

Columbus was a nobody navigator that got Spain to finance his risky voyage west to reach China, believing it was shorter route compared to sailing around Africa and across the Indian Ocean. He didn’t care for The New World due to the nasty hurricanes and the island natives practicing cannibalism. The Spanish were the ones that went berserk over here in their quest for gold and silver. They didn’t have much luck colonizing North America because the native tribes were more than the Spanish could handle.

Columbus was just an explorer, but as the only autochtonous population of US are the natives, blacks are as guilty as the whites in stealing their land.

Columbus was a genocidiare. The end of white washing history has come

What is funny, courtesy an article on Garway Pundit, the homeless, ate all the food, from the Capitol Hill Anti-fa Exclusion Zone. Leaving the Protesters to beg for Vegan friendly hand outs, and armed supporters, for protection. There will be stories, worth checking out, whilst munching on the popcorn.