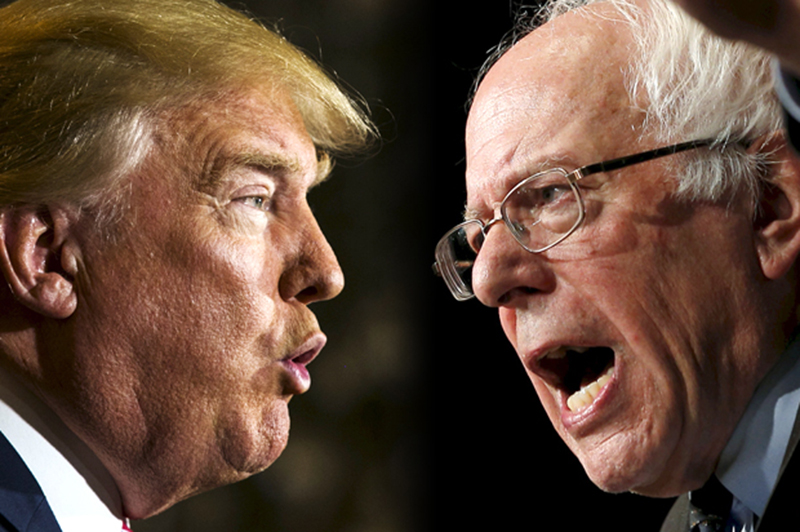 Following the US presidential elections is always challenging due to some particularities of the US system, such as the primary and the Electoral College. In 2016, the process is even more curious, since the supposed ‘new policy’ has been exacerbated by candidates who took the front of infighting: Bernie Sanders by the Democrats and Donald Trump in the Republican arena.

In New Hampshire (February 9th), Sanders and Trump won with about 20% advantage over their opponents. While Sanders reached 60% of the vote, Clinton got 40%, and Trump reached 34% with an almost fourfold tie: John Kasich 16%, Ted Cruz 12%, Jeb Bush and Rubio with 11%. The rise of Kasich, a name which almost discarded before the vote, was more than surprising. The decline of Cruz was expected in view of the less religious profile of New Hampshire, while Bush and Rubio fight to survive. But what is this ‘new policy’?

Basically, the campaigns of both candidates are defined as outsiders and is built on the myth of the common man, the son of immigrants, successful, that the fight against corruption and bad habits of Washington. Three pillars propel them: the media performance, controversial ideas and the condemnation of the others by the US problems and yet large lobbies, powerful corporations, traditional politicians, the selfish rich and Wall Street (Sanders), or traditional politicians, illegal immigrants, drug traffickers, the Islamic State, China, Mexico, India, among others (Trump).

They are two intruders in their parties. Trump, a real estate magnate from Manhattan, weaves the strands of ultra-nationalism and xenophobia in a campaign driven by intolerance and extremism. He promises to deport 11 million undocumented immigrants, which would amount to the declaration of a civil war. Sanders, an independent senator from Vermont and newcomer to the Democratic Party, declaring himself a ‘democratic socialist’, he aims instead, moves by exclusive territories of the Clinton clan, adding the votes of the Latinos and black people to their excited young voters. A political gulf separates the two populist, which however, share similar ideologies.

“We have nothing except problems. Our leaders are morally corrupt. They are selling the country in the souls of the basin. The American dream is dead.” The sentences are from a speech during Trump’s campaign, but could be also signed by Sanders. Both convoke an insurgency against the corrupt political elite, who have capitulated to what Wall Street wants. Both call for the State to protect the ‘common man’, restoring the security and lost prosperity. Sanders has committed to a state health system. Trump wants something parallel, but without the ‘socialism’ aspect: a universal system financed by the State of private health insurance. The right-wing magnate challenges in everything the Republican ultra-liberalism, less on reducing taxes for the business corporations.

“It’s the economy, stupid!” warned the leadership of the Clinton campaign, in 1992, a poster aimed at his supporters. After the 2001 recession, in five years the average real household income of the Americans rebounded, almost returning to the previous levels. However, it again changed in the 2008-2009 crisis. The economy is growing, but the wages remain stagnant and the average income hovered at levels around 7% below those recorded in 2000. It shatters the expectations that with hard work you’ll get a better life. One from the right and other from the left, the two populist march on the shrapnel of the ‘American dream’.

In the US, the elections are won or lost, and the presidential candidates are selected or rejected, not based on ideas or superior personal qualities but only by the size of their bank accounts and their campaign funds. To be president of the richest nation in the world, you need to be a millionaire or have the support of several millionaires. Here, the democracy becomes an empty word. It is the government of the rich, by the rich and for the rich. Hillary Clinton began in 2016 with a campaign fund of $145 million from her big business supporters.

In contrast, Sanders raised about $ 3.5 million in donations, with an average of $ 27 per person. After his success in New Hampshire, his website for raising funds has jammed and crashed because so many people were sending money. Asked at a debate to explain the difference between his plans and Clinton to deal with the big banks, Sanders said: “The first difference is that I do not take money from big banks, I do not get personal donations from Goldman Sachs to give lectures.”

Hillary Clinton received, in 2015 alone, $675,000 in Goldman Sachs’ conference fees, and this is only the tip of the iceberg. Bill and Hillary Clinton received more than 153 million dollars from talks paid over the last 15 years, according to a study by CNN. This includes at least 7.7 million paid for 39 speeches to Wall Street firms, including Goldman Sachs, UBS and the Bank of America. Of course, Hillary denied indignantly that this corporate generosity has exercised any influence on her political preferences, but as the saying goes, “He who pays the piper dictates the tune.”

Is the Bi-partisanship in Check?

Nobody believed that the young people in the US are interested in politics. This is not surprising. What was there to make the politics interesting? Politics was a nuisance: one ring of meaningless circus, where Democrats exchanged places with the Republicans, with monotonous regularity, without anyone noticing any difference. But now, all that has changed. The US politics have suddenly became interesting.

The main force that is giving impetus to change is the youth. A British observer described the support for the Trump-Sanders double among young people as “impressive.” The move, at least initially, was not so much the result of a concerted effort of the campaign, but rather a spontaneous response to the candidates themselves. A generation that has been constantly bombarded with marketing and misleading advertising slogans, now, see in Trump-Sanders something different and strangely compelling. In the interviews, the young supporters offer some version of the same answer when asked why they like one or the other: “Here is a man who seems sincere.”

Tactically, Sanders and Trump are very much alike, despite their proposals are very different. Both indicate that their legitimacy will come from the people and not the ‘system’, as a direct democracy. Sanders says that his government will be a representation of a popular revolution of the poor and the middle class against the rich and the elite. Trump claims that will represent the successful America, and for the ones who work hard, and to be directed by him as a CEO, where all the poor and middle class may be high, since freed of state bonds. Trump is Obama’s anti-thesis; Sanders is Obama’s deepening that, in his point of view, did very little.

The ultranationalist and the ‘democratic socialist’ converge also in the complaint of free trade, which would steal jobs from Americans. The liberal system is guilty, according to Sanders, or are the foreigners, according to Trump. The solution, in their view, is protectionism, the renunciation of the mega-trade agreements with Europe and Asia and the imposition of trade barriers to imports from China and Mexico.

There is a growing sense of alienation from the traditional political parties. Now, this alienation is turning into hatred. This is where we get the explanation for the rapid rise of Trump and Sanders. Beneath the surface of the American society there is a seething discontent, anger, and above all frustration. As tremendous forces that accumulate beneath the earth’s crust, these discontents are seeking a way out. Sooner or later they´ll find a way and this can happen in the most unexpected places.

If we look at the history, the US stability was based on two solid supports: the Democrats and the Republicans. Now, this seemingly solid building is showing cracks in its foundations and the mainstream media is getting alarmed. Gideon Rachman points out the risks of the ruling class – and not just the US:

“If the desire of America by anti-system leaders from the political periphery continues, the implications will be profound – for the US and the world. The system, dominated by Democrats and Republicans, has always rejected political extremes. This means that behind the everyday dramas, the nation has benefited from a deep political stability, which contributed greatly to its economic strength and overall power. If the immunity of the American extremism is ending, the whole world will feel the consequences.”

Great write up – Sanders and Trump are both better than the establishment alternative, in my opinion and the ramifications of either of them winning or losing are immeasurable.

“The system, dominated by Democrats and Republicans, has always rejected political extremes. ”

Any district based system promotes bipartisanship, political extremes and mask massive disenfranchisement as political stability. In the US the district based system excludes third parties and normal evolutionary development of third parties. It establishes political elites for decades as exemplified with the ever increasing dynasty trends. It also establishes an political culture ignorant of compromise. In addition to that any candidate has to prove his worth to his district back home en is forced to engage in horse trading with his colleagues establishing an environment of corruption. Even before any election starts shameless gerrymandering is skewing any election.

Republicans are extremists. Democrats like Clinton with her Brzezinski inspired US hegemony full spectrum dominance are even worse exploiting liberal humanitarian language to pursue the very same goals. Face it district based electoral systems simply are not democratic. Cameron with only 36,9% claiming an absolute majority and pursuing all out neo-liberal policies is another example.

Proportional representation forces to coalition government. Smaller parties even with their constituency distributed over the whole of the country still get represented and their growth timely signals to the established parties a change of mood of the electorate.

http://www.telegraph.co.uk/news/general-election-2015/politics-blog/11591262/Ukip-has-three-million-voters-and-a-handful-of-MPs.-Something-has-to-change.html Case in point look at UKIP 3 million votes 1 or 2 seats and the SNP with 4 million some 59 seats. No way one can sell this as democracy.

I’d be fine with Sanders or Trump winning, I support both of them even though I don’t agree with everything they say. As for the bit “money decides who wins” is a bit inaccurate, while it’s true campaign financing is skewed in America it doesn’t matter how much money you have if you’re simply a bad candidate. Jeb super PAC spent $110m and got nothing out of it, Bernie Sanders during his first few months barely had any money to his name but was already a serious contender against Hillary. While the political elite hold a significant amount of influence over each presidential election, especially for democrats it holds true that democracy isn’t totally dead in America yet. Most people just assume it is and don’t vote for local, state and national elections because they’re led to believe it’s rigged and they shouldn’t bother. That’s the ideal way for the political elites to pick their candidate, when the people are too ignorant or lazy to vote for the right candidate.