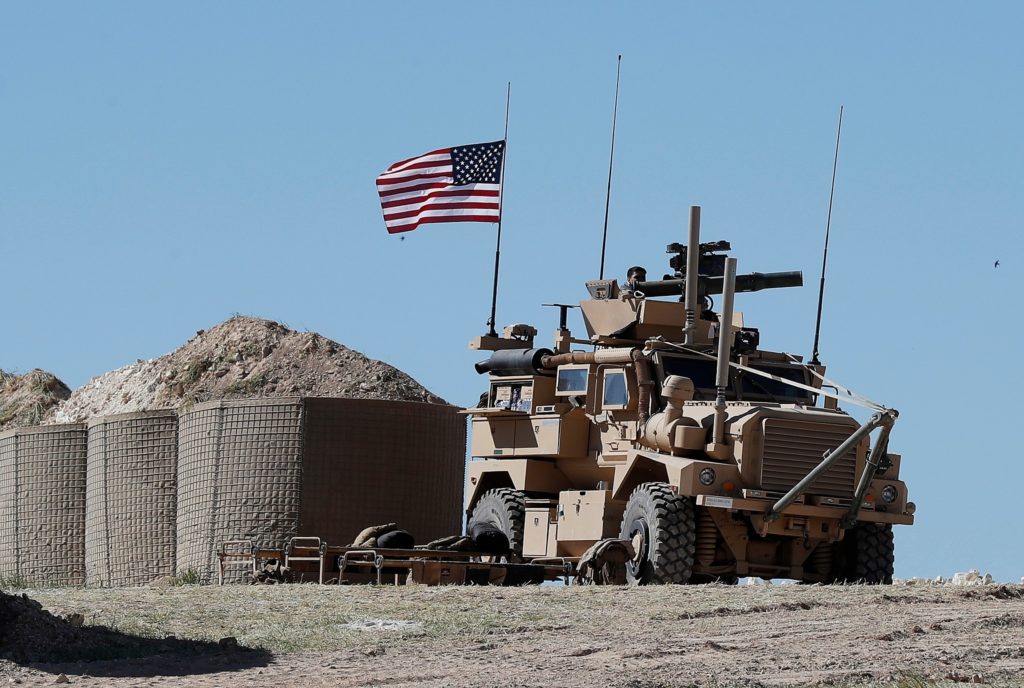 A US soldier sits on an armored vehicle at a newly installed position in Manbij, north Syria, April 4, 2018. (Hussein Malla/AP)

The Trump administration is developing a new strategy to deal with the growing Iranian and Russian influence in Syria, NBC News reportd on October 16 citing defense officials.

According to the report, the new plan will include a further increase of political, economic and diplomatic efforts to force Iran out of Syria and to punish Russia for its support to the Assad government.

“It would withhold reconstruction aid from areas where Iranian and Russian forces are present, according to three people familiar with the plan. The U.S. would also impose sanctions on Russian and Iranian companies working on reconstruction in Syria,” NBC News said.

NBC News also quoted Mark Dubowitz, chief executive at the Foundation for Defense of Democracies, which the outlet described as “a think tank strongly opposed to the Iranian regime”.

“There’s a real opportunity for the U.S. and its allies to make the Iranian regime pay for its continued occupation of Syria,” Dubowitz said.

The NBC News report also claimed that right now the US military is not seeking an open confrontation with Iranian forces in the war-torn country. Nonetheless, it’s obvious that Israel, a key US ally in the region and another support of the large-scale anti-Iranian strategy, will not abandon its attempts to strike alleged Iranian and Iran-linked targets in the war-torn country even despite the recent delivery of Russian-made S-300 air defense systems to the Syrian military.

If the delivered systems show themselves effective against the Israeli Air Force and some Israeli aircraft are shot down, this could and most likely will lead to further escalation of the conflict between Iran and the US-Israeli bloc.

AIN’T IT ABOUT TIME FOR SANCTIONING WAHHABISTAN?!

Nope: IsraHell, the United Kingdom, Wahhabistan, France…..that’s basically it… Let them do business together….the World shat them out…

But no no no, the Cebrowski-Barnett doctrine is still obviously a conspiracy theory! (Funny how Chinese money is not mentioned.. for now at least)

MADE MAKER
Reply to  Jesus

Only when the carrier was on station. MiG-29K is exclusive to the carrier. There were some MiG-29SMT operating in Syria, or perhaps your’e mistaking the Su-27 to 35 for MiG’s. These are just supersized MiG-29’s, anyway.

The Ks have more features than the SMTs don’t they? Like stealth and thrust vectoring. Maybe Syria’s order could be filled with a special order for a land based version of the K model.

There are multiple sources reporting that Syria has having SMTs. Including Wikipedia and one that I translated from Russian:

They are however Not* Full…. SMT level upgrade.

The Syrian Mig 29s are not Full SMT upgrade!

I’m proving it out via documentation,

SF is crippled….by posters like You. ….who live in Fantasy… and ignore History Evidence.

Richard, …. A Full SMT upgrade is frame mod with Engines moved further Aft..,enlarged wings Syria’s Mig 29s do not have this.

You can ….FANTASIZE your Russia WAR PORN……all you want,

South Front is …CRIPPLED*……having Limited Mind like you run the Tech teach on the board, With FEW saying…. NO WAY…To your ….FANTASIES!

Posters on Russia Insider are more Realistic about Events and technology,

Rather than being rude, obnoxious, vulgar, and anti social. If you really believe what you write. Then it should be a pretty simple matter for a purported know it all like you to prove that the Syrian Mig-29s weren’t upgraded to SMT classification.

I’ve provided quality evidence that they have been. None of which you’ve disproven. If anything, your screaching primate behaviour indicates that you’re an imbecile, liar and truth hater.

Have Southfront publish an Article on How Syria’s Mig 29s were upgraded to Full**SMT specs.

If it’s soo sure and obvious, It will be easy for them.

Otherwise. ..the upgrades are of different specs… Mig 29 sm.. Just as the articles I linked to forward.

This is exactly what I expected, you have no proof that the articles that I linked to are anything other than what they claim to be. If you don’t have proof to prove your point as I’ve proven mine. Then I’m not going to waste my time debating your failure to disprove what I’ve provided.

No. The SMT is the most upgraded version, and it’s extensive. The “K” is built for carrier landings, everything Russia has appears to be infinitely upgradable. The ship serves as vectoring for the mid, and long range radars the land based planes didn’t have until recently, when the latest electronics became small enough to fit in the limited space a MiG-29 has. I hadn’t realized they were as small as they are. That’s the easiest way to tell them from a Sukhoi, who himself said his fighters are just supersized MiG-29’s.

The SMT is definitely 4++ . Even Wikiwhatever has a fairly accurate analogy. This upgrade answered all of MiG-29 shortcomings, and the electronics, that left it blind at mid to long range. The “K” stands out as it has the heavy landing gear, tailhook, etc. for carrier operations. It’s radar still worked, as the ship acted as the ground vectoring the original electronics used. The issue was there wasn’t space in the plane for the new setup to fit. It was only recently this new setup is small enough to install easily. The Sukhoi’s use this, upgraded weapons hardpoints, to carry the latest weapons, new engines with more power, and no smoke, increased internal fuel capacity. Russian fighters have always been short in internal fuel capacity. If I recall it carries about the same internal fuel as Western fighters. Execpt F-16 which is light on this. The West lost the only advantage it had over the 29. It’s fast, second fastest fighter in the world, giving up the record to MiG-31. Probably the best dogfighter ever, not even F-16 can turn with it. The Luftwaffe pilot that’s flown a 29 (A or B) endless hours, and in top gun competition as adversary was suitably impressed. Check it out at Wikiwhatever. There’s a reason Sukhoi’s look like super size MiG-29’s.

MiG-29SMT is the 4++ generation upgrade. MiG-29K are carrier based, and as the carrier provides the ground vectoring to these, they don’t have the blind spot in the mid to long range radars. MIG-29SMT, has the latest electronics available, same as the Su-35.

Could turn it over to the Americans. See Afghanistan and Iraq for examples of first class reconstruction ….billions of dollars. Most diverted to their empire building and pockets of a few fat cats.

We are all heart. No wonder we are so hyper-moralistic all of the time.

americans and their sanctions…….. Poor shit4brains I guess is hard for them to digest that none give a flying f*ck what they think or say. Been spiteful for been cut out of what they destroyed and planned to be having the lions share along with their partners in crime reconstructing and controlling goes to show the low levels they are.

I often wonder when we see this errand boys of globalization, begin to foam in the mouth.

Russia has to back of from fx Eastern Europe and make normal relations respecting those nations (again).

I would not be surprised if there were some new sanctions soon by US against Iran or Russia for being a state with some human population! I have a feeling that the current management, or their manupulaters, of US have gone berserk.

Trump and the US Deep State message to the world.

‘Buy our military shit at exorbitant prices or we and our proxies will ‘bomb ya’ and demand money with menaces to ‘rebuild ya’. :)

Americans do not really want the refugees to return back to Syria. They want them to suffer in the refugee camps in Turkey, Jordan, Lebanon to pursue their regime change plan.

That is very true and the epitome of Zionist neo liberal and neo conservative atrocity.

As long as their is no Damaskus change, they seemes to be hostages. Hard to be the lira witout them too.

This is an example of the propaganda horseshit Americans are subjected to 24/7. The MSM is the tool of choice of the scum that now controls the vast majority of the western nations. If there is ever a reckoning, these people should figure prominently in treason trials…and end up dancing right along side their kontrollers.

You confirm very well, we are kind of united in this, but You forget fx EU, India and China dont agree about the level.

It has been a “few weeks” since I have heard something so stupid come out of this government it makes them look so bad I cannot believe this!

I always have Jamie :)

Another brainless threat .. so shameful .

US love to see the destruction of Syria. What nonsense about they concerned about reconstruction as though Assad wants their money (fiat) … Assad has China to fund it . No need US money which Syria they destroyed a lot of infrastructures.

Wont change a thing. Russia, Iran and China will send in companies with no outside footprint and be paid in barter or non -dollars and this will circumvent the embargo. Inefficient and wasteful but still effective. The job will still be done and Syria will actually get infrastructure built,unlike afghanistan and Iraq where the money disappeared into fat American and native -crony pockets!