The aggressive flybys come days after Secretary of Defense James Mattis warned of “consequences” if Beijing continues weaponizing the South China Sea, further accusing China of “intimidation and coercion” in the Indo-Pacific region, which he specifically made clear that Washington has zero plans on leaving the heavily disputed area.

His speech, well, it promoted an angry Chinese response during IISS Shangri-La Dialogue, a civilian and military defense summit in Singapore, where Lieutenant General He Lei told reporters, “Any irresponsible comments from other countries cannot be accepted.” 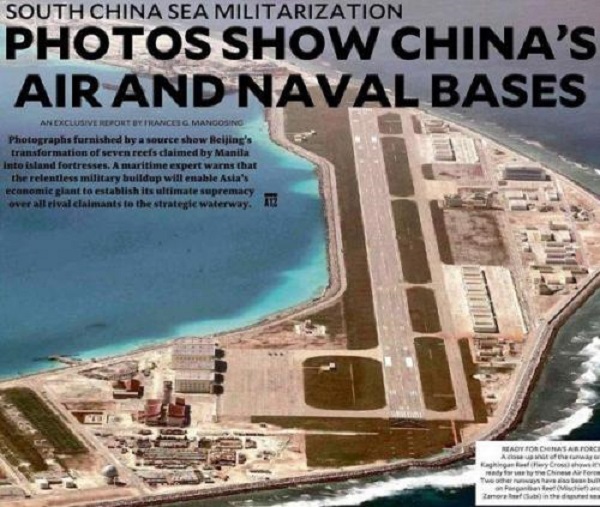 As we explained on Saturday during the IISS Shangri-La Dialogue,” The United States and China appear to be headed for a military collision in the Southeast Asia region.”

Beijing claims that most of the resource-rich sea, which overlaps claims from Brunei, Malaysia, the Philippines, Taiwan, and Vietnam, belongs to China. To reinforce such claims, Beijing quickly built artificial islands and erected military bases on Parcels and Spratly islands. Regarding trade, more than USD five trillion in shipping trade flows through the region per annum.

The U.S. defense official, who has classified knowledge of the B-52s original flight plan, said the operation called for two nuclear-capable U.S. Boeing B-52 Stratofortress bombers to fly roughly 20-miles from the militarized Spratly islands. 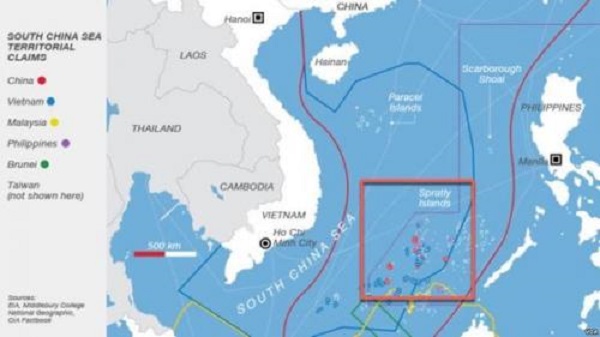 U.S. Air Force Captin Victoria Hight, a spokeswoman for U.S. Pacific Air Forces, told CNN that the bombers did not fly in the vicinity of the islands.

A Pentagon spokesperson said the Guam-based bombers were on “a routine training mission,” departing from Andersen Air Force Base “to the Navy Support Facility” at Diego Garcia Atoll, a British Indian Ocean Territory.

U.S. Lieutenant Colonel Chris Logan said the operation was part of U.S. Pacific Command’s “Continuous Bomber Presence” missions, which he explained are “intended to maintain the readiness of U.S. forces.”

“U.S. Pacific Command’s CBP missions, which have been routinely employed since March 2004, are flown in accordance with international law,” Logan added.

The B-52s operation to buzz China’s militarized islands came shortly after Mattis warned Beijing that “the placement of these weapons systems is tied directly to military use for the purposes of intimidation and coercion,” adding that “China’s militarization of the Spratlys is also in direct contradiction to President Xi Jinping’s 2015 public assurances in the White House Rose Garden that they would not do this.”

#SecDef Mattis discusses US leadership and #IndoPacific security challenges during the #ShangriLaDialogue June 2. The #ShangriLa Dialogue, held by the @IISS_org, is an inter-governmental security forum attended by defense ministers and delegates from more than 50 nations. #SLD18 pic.twitter.com/o1VK4UKiSE

Last week, the Pentagon increased its rhetoric about China’s militarization of islands in the South China Sea, even as the Trump administration asked Beijing for cooperation on North Korea. When questioned by a journalist about the ability of the Pentagon to “blow apart” China’s artificial islands, Lieutenant General Kenneth McKenzie, director of the Joint Staff, told reporters, “I would just tell you that the United States military has had a lot of experience in the Western Pacific taking down small islands.”

Meanwhile, Beijing reacted to the threat via Pentagon statements. On Thursday, Chinese Foreign Ministry spokeswoman Hua Chunying said the U.S. accusing China of militarizing the islands was, “like a thief crying, Stop thief!’”

“Why does the U.S. choose to sail every now and then close to Chinese South China Sea islands and reefs? What is the U.S. trying to do?” she said.

Last month, we reported that the U.S. Navy conducted its “freedom of navigation” patrols near the heavily disputed islands to demonstrate the right to sail through those international waters, which sparked outrage via Bejing.

From Mattis to Lt. General He militant jawboning this past weekend at the IISS Shangri-La Dialogue, to U.S. Naval warships and B-52s encircling the militarized islands, followed by China’s warning that any tariffs by Trump would kill a trade deal between the U.S. and China, it appears that Sino-American relations continue to plunge. It seems like the heavily disputed waters in the South China Sea could emerge as the next geopolitical and military flashpoint. Which, when one considers that according to the RAND Corp, and the IMF, China will surpass the U.S. as the world’s leading military superpower some time in the next 2 decades… As stated below, the trend is evident, Washington and Bejing are preparing for war. 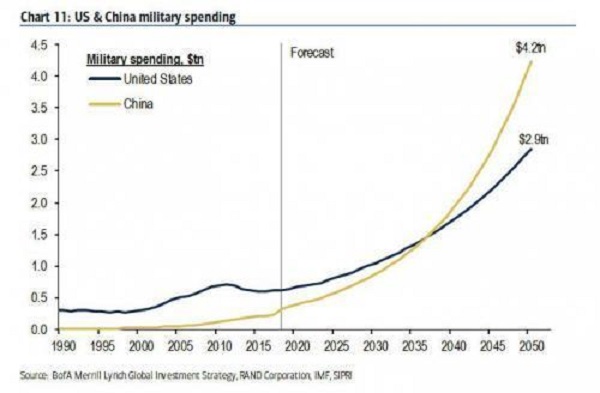 So when is China going to fly over the Marshall Islands and other man made island/bases by the US in the Pacific. Be nice to see photos also.

IF China does it, they first take out all US soil-air-defense systems and it’s almost sure that they won’t stop by flying over… It’s the beginning of a bloody war :)

Fly over is a figure of speech, satellites do the job these days but to defend ‘freedom of navigation’ in International airspace and waters one would physically do a fly over. Yanks won’t start a war, they are all bluff and piss poor poker players.

Why? flying over somebody’s head with very large and visible military aircraft is a cry for help, don’t You see?

“Nuclear bomber”, my a##. It’s a B-52, what NUCLEAR? Who told you that they carry nukes? And BTW, meanwhile nuke-missiles cam be launched from smaller planes (fighters like the SU-30 MK or SU-35, SU-57. The F-22 Raptor cam also carry tactical missiles with a nuclear head. They are only much smaller than the ICBM loads. And be sure that the nukes won’t be carried by the B-52, the USA have for that purpose the B-2. And even IF the B-52 carry a nuke, it won’t FLY OVER the target like “Enola-Gay” over Hiroshima. The B-52 launches the Cruise-missile from far-away and the turns to base. F*king inflammatory formulations, to give that sh*t of a “News” a “Breaking News!”-image.

This is OK, be Patient. Look at how the Russians Stall North Korea deals… this is a complicated game that the Americans know they will not win by this time next year.