The U.S. Navy announced on February 13 that it had seized a large cache of Iranian weapons off the shores of Yemen.

“The weapons seized include 150 ‘Dehlavieh’ anti-tank guided missiles (ATGM), which are Iranian-manufactured copies of Russian Kornet ATGMs. Other weapons components seized aboard the dhow were of Iranian design and manufacture and included three Iranian surface-to-air missiles, Iranian thermal imaging weapon scopes, and Iranian components for unmanned aerial and surface vessels, as well as other munitions and advanced weapons parts,” CENCTOM said in an official statement.

A video showing the operation and several photos showing some of the weapons seized during it were shared by the U.S. Navy.

USS Normandy nabbed the weapons while on patrol in the Arabian Sea. (Video: U.S. Navy) pic.twitter.com/7uUWXnHVRx

#US Navy seizes a cache of weapons bound for #Yemen‘s #Iran-backed Houthi members, Pentagon says, including 150 anti-tank missiles & other arms “of Iranian design and manufacture” such as surface-to-air missiles, weapon scopes, and drone parts.
? pic.twitter.com/IBAsldhDrT

The CENTCOM said that the Iranian-made weapons were en-route to the Houthis in a violation of UN Security Council Resolution that prohibits the direct or indirect supply, sale, or transfer of weapons to the Yemeni group.

Last November, the U.S. Navy seized a very similar shipment of Iranian-made weapons that was also on its way to the Houthis.

These operations by the U.S. Navy are a perfect example of Washington’s continues military support for the Saudi-led coalition in Yemen.

You have really really big delusions of grandeur, Igor.

Thought my name was igor, Shlomo. I see you’re on hasbara shift again.

That’ because you’re an idiot and any lie flies.

Nahhhhhhhh…just telling it like is indicated on this Kremlin site.

The name is Giannis.. Cheers from Greece. And get your filthy a**es out of our country as well..

The Jew scum and Goldman Sachs bankrupted your country too. They are all parasites.

Well win an election and leave NATO. But you can’t and you won’t. Just another spouter, Russian or not.

Hopefully we will one day leave NATO. Till then I will work to undermine US and NATO interests in every way possible, just like the US has done for my country. If there is a war, I might even get the chance to off some filthy US soldier.

Erida? Anyway, that is what I have been doing and will continue to do.

It is “Death to USA!” that’s how Iran chant the word.

My 82-year-old grandpa does. Really. I’m not lying.

I believe that they will repeat, word for word, anything the Pentagon says to them like good stenographers.

This is absolute concoction and sheer desperate fabrication at a time the US public is wary of any escalation with Iran. The senate passed a resolution restricting presidential war powers regards to more hostile acts after the illegal assassination of General Soleimani. The deep state and Zionists had to deflect attention and keep tensions going.

If you missed it, that very resolution indicates that if Islamist Iran did to US troops or Israel what you suicidal fools around here pine for, it would be the end of Iran as a functioning state and society.

In this case, as the article indicates, the US was authorized by the UNSC. Try to keep up.

Bullshit. Since when has the US neeed UNSC authorisation to manufacture imaginary events.

Me&Myself None
Reply to  Xoli Xoli

Arch Bungle
Reply to  Me&Myself None

The US leadership can barely operate their analog telephones

And next you will claim chocolate milk comes from brown cows.

Next we’ll claim Jews come from the middle east.

Well, all the DNA studies say they do. 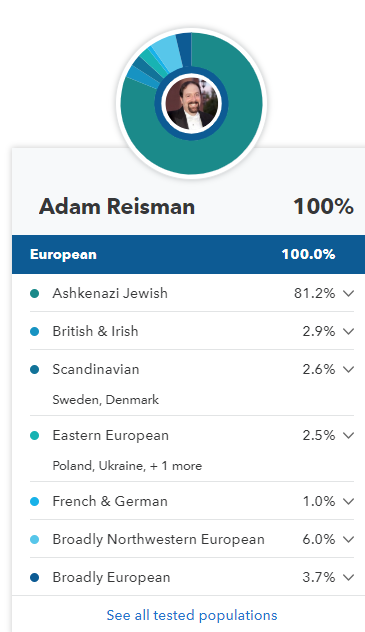 So? The genetic studies used to define Ashkenazi indicate significant Mideast origins. Go check any of the popular DNA test sites and get an education. Oh, and some 20% of the Jews in the world and almost half the Jews in Israel today are indigenous to the Arab countries of the Mideast and North Africa.

Not true, most are Ashkenazis. And the Jews who made up the founding Zionist paramilitary factions were Ashkenazi from Europe. The mizrahi jews had little to no involvement in any militant activities against Palestinians or British before 1948, they were living peacefully with Arabs and Palestinians for many years until the radical european jews came in and spread violence and terror.

Hey, dodo, the DNA of the Ashkenazi is about half Mideastern. And what the hell do you think “Diaspora” means? Damn, there are a lot of Schmucks with Earlaps like you around here.

wow, you seem offended, are you jewish? ?
No, just a zionist, who are incredibly offended by genetic/ancestral facts. You’re no semite, neither are ashkenazis. Just get over it already.

You stupid liar. I challenge you to provide valid sources for that false claim.

European Jewish History
The European Jewish region is not geographically defined in the same way as most other ethnic regions. The historic dispersal of the Jewish population from its origin in the Levant on the east coast of the Mediterranean resulted in insular communities scattered throughout Europe, North Africa, Central Asia and the Middle East.

For populations of the Jewish diaspora, the genetic composition of Ashkenazi, Sephardi, and Mizrahi Jewish populations show significant amounts of shared Middle Eastern ancestry.[1][2][3] According to Behar and colleagues (2010), this is “consistent with a historical formulation of the Jewish people as descending from ancient Hebrew and Israelites of the Levant” and “the dispersion of the people of ancient Israel throughout the Old World”.[4][5]

That a good enough start for you, Adolf.

Yep, like a stopped watch you are correct now and again.

Yep, Washington’s continued support for mandates of the UNSC. Islamist Iran might try that now and again.

The Houthis need all the weapons they can get to be as strong as they possibly can. They need to liberate themselves from Saudi fascism. Every weapon for the Houthis counts.

How do they know it was bound for the Houthis? Did it have a tag and a bow on it reading …… With love for the Houthis from the IRGC ……? Yeah right. This looks like BS.

So this is the 4th weapons seizure from a small boat the U.S. navy has made over the past 6yrs and all of them involve small arms. These could also be weapons being sole to Somalia on the black market.

This weapons actually help USA to sell more expensive weapons to Saudis. Though they need to show they help from time to time. Probably there are hundreds of boats like this.

Notable that Russia and China are officially on Saudi-NATO side of this war.

No worries, the saudis left the yemeni army with plenty of.goodies lately.
Like LR said, this is a pathetic PR “win” for usa and friends. This.wont change the tide of war in their favor.

These seem to be just empty tubes of some kind and there are no launchers. A poor Hollywood propaganda stunt at best. Shows US desperation as its Saudi vassals lose the Yemen war, they started and now can not finish.

UN resolution prohibits supply of weapons to the Houthi group in Yemen.
Well, US is a rogue actor now and these sort of resolutions are toilet paper. UN needs to be disbanded (or at the very least its HQ needs to be moved to a neutral country.

But … Russia voted also for this resolution. :-O

Frankly, with every victory the Houthis achieve its like Xmas with what the KSA and its allies ‘supply’ them. Obviously, this is nothing more than an attempt to add another ‘crime’ to the list of what this ‘rogue nation’ does

Based on UNSC resolution and it’s prohibition of transferring arms to Yemeni popular government, Yemeni Army and Ansarallah (and not all the parties involved and specially not the invading aggressors), as everybody points out the UN should punish Saudis severely for all the arms and weapons they have supplied and keep supplying to the Houthis. Every day they send bulks of weapon, from bullets to Tanks and recently even manpower!

Don’t underestimate Saudi geniuses: They probably planned to kill Houthis by the sheer stress of “how can we possibly use all these weapons?”

USG also made progress. They started by showing off used Kalashnikovs (confiscated from Somali pirates/smugglers) and Nikki’s metal tubes (courtesy of ISIS in Syria after being thoroughly whacked by Iranian missiles) to this (also probably came from their “assets” in Syria, if the weapons are really, really Iranian-made) and like all their wonderful plans, they recycle it every other week by putting the same cargo in a new dhow and declare a new “discovery”. I just wish their videos weren’t so low-res and crappy.

PS. I read a few comments under the tweets. interestingly, many of them are condemning the congress for limiting Trump’s warmongering. I’m sure it’s just an innocent coincidence and not at all the aim of this production.

the biggest violator of the sanctions in the UNSC resolution is most definitely the Saudis! i mean, the houthis are basically drowning in weapons they don’t even need! i’m sure if they wanted weapons from Iran, there is absolutely nothing the americans can do about it. they are well supplied by their neighbours up north, so off with the crappy shitty propaganda of intercepting weapons from the Iranians, they can’t. the americans are just liars are goons. looking to score cheap points. the Saudis have lost the war already and all the F-16s in tje world can’t change that

They seem impressed by the weapons.

This is a complete fabrication. Nothing was inyercepted. All photoshop. Just like that ridiculous cia video of Iranians shlepping all the way over the gulf to pull mines OFF a ship.

Now if I was Iran I’d send about 100 cheap little fibreglass dinghies over the strait packed with fake arms. Just to fuck with people’s heads.

Unrelated question: Does anyone know why Russia and China sided with the NATO/US/GCC side in the UNSC?

guess it was a time when russia thought it could still garner some favours from the disunited states of A and then they yrusted them again when it came to libya – guess they say never again.

I guess that when it’s a hoax, a pentagon/whitehouse moron’s hoax, the video clips are grainy and of no value. great guys over in fantasyland where the american dream is in a twist.

Umm…why would Iranian made copies of a Russian ATGM be labelled in American English?

To the Pentagon: Try pulling the other leg, it’s got bells on…

They are just empty cardboard tubes used for transporting paintings and architectural plans. Hollywood props at their worst.

That’s all the USN is good for – piracy on the high seas. Blatant theft of legitimate arms needed for self-defence of the Houthi people from the barbaric headchopper Saudi Wahabbi goat-rapers and their African slaves.

“Piracy” as authorized by the UNSC. Try to keep up,