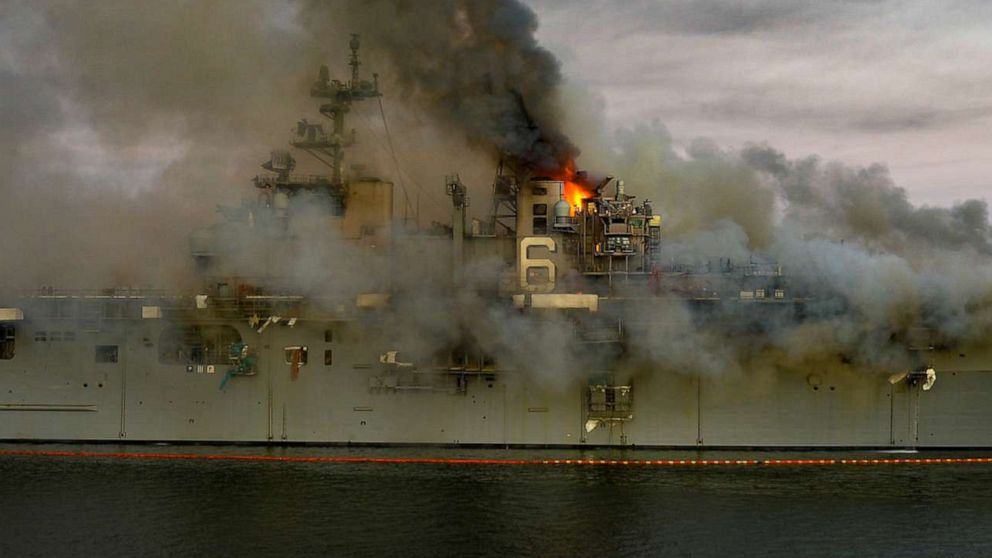 A US Navy sailor is being questioned by investigators after being suspected of starting the massive fire on the USS Bonhomme Richard in San Diego in July, according to unnamed defense sources cited by ABC News.

The fire that took several days to put almost entirely destroyed the ship. Repairs allegedly began on it, but debates are still on-going if it isn’t more reasonable to simply scrap it.

The Naval Criminal Investigative Service (NCIS) has identified the sailor, serving aboard the ship, as the potential suspect that may have started the blaze, according to one official.

The investigation is still ongoing and no charges have yet been pressed, another official said.

“The Navy will not comment on an ongoing investigation to protect the integrity of the investigative process and all those involved,” said Lt. Timothy Pietrack, a U.S. Navy spokesman. “We have nothing to announce at this time.”

The fire began on the morning of July 12th, in a storage area above where Marine Corps vehicles are usually stored on the large amphibious assault ship.

The fire quickly spread to the ship’s hangar deck, where it spread throughout most of the ship’s upper decks and kept going for 5 days, while attempts to quench the fire were on-going.

The Navy is carrying out four investigations into how the fire started and the extensive damage that it caused.

Following a tour of the damage in July, the Navy’s top admiral questioned whether it made sense to repair the ship that has been in service since the late 1990s.

“I am 100% confident that our defense industry can put this ship back to sea,” said Admiral Mike Gilday, the chief of naval operations. “But, having said that, the question is: Should we make that investment in a 22-year-old ship? And I’m not going to make any predictions until we take a look at all the facts and we follow the facts and we can make reasonable recommendations up the chain of command on the future steps, any repair efforts, future repair efforts of Bonhomme Richard.”

The Bonhomme Richard is a Wasp-class amphibious assault ship, 844 feet in length and resembling a small aircraft carrier. It is used to transport a Marine detachment, its equipment and aircraft. The Bonhomme Richard was one of the first vessels being retrofitted to carry the new F-35B Joint Strike Fighter, setting back plans to deploy the new stealth fighter jet on amphibious assault ships.

I told you guys from get go that pissed off Blacks and Hispanics and even rednecks are out destroy the broken failed state of cunts. This is just the beginning. The Jew parasitic cunts have created a nightmare for the average trailer trash idiots who have no education, health care, no homes, no hope, so what do you expect? The Americunt nightmare is just beginning.

What do you mean? We trailers are the ones who have a home, a hope and nice girls passing by now and then, and we educate ourselves with a beer around the fire.

What do you have man? Nothing man, nothing!

US evil empire is being burnt from within.

Very interesting development with the USS Monsieur Bon Homme Richard. The accused arsonist can say in his/her/its defense that it had an epiphany and didn’t want to be a part of the US policy of death, destruction, terror, misery and provocation all over the world. I’m sure some really degenerate, shyster lawyers would take the case, for the right amount of shekels and insist on all charges being thrown out. As for the ship, Hollywood could use it.

Congo Jim was smoking a few joints and somehow ignited some fuel.

People must stop arson and putting everything on fire because their salaries are a few days delayed. This is not the right way to do it.

I did wonder if it was deliberate, given all the social upheaval facing America recently. Wouldn’t be surprised if some twat with Antifa or BLM sympathies did it. Not that I care, just one less warship for the failing empire.