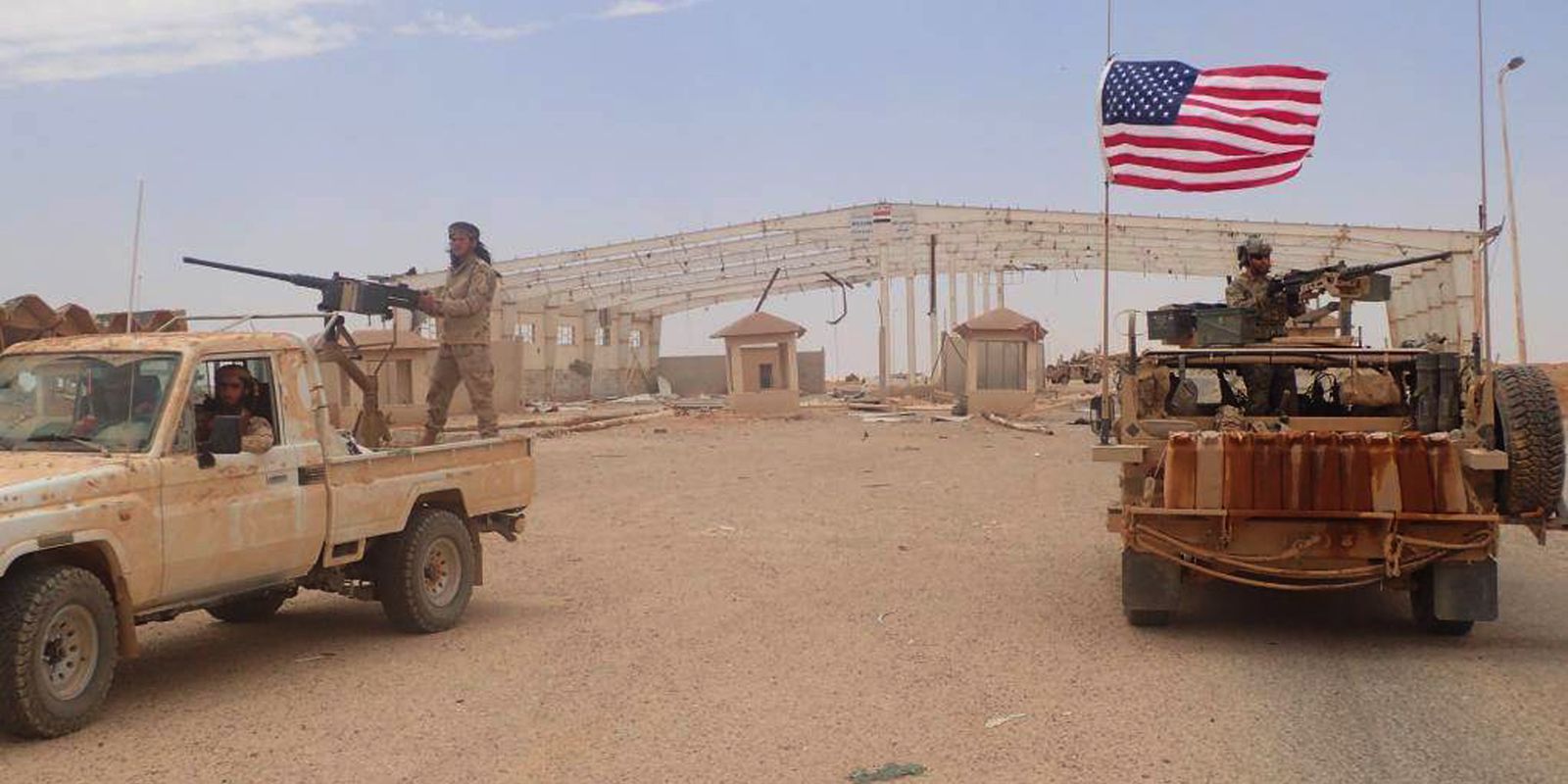 On July 15, an Iraqi source familiar with the situation in the country told the Lebanese al-Mayadeen TV that the U.S. is seriously considering establishing a military base on the Syrian-Iraqi border. According to the source, the new base will have wider tasks than the current base in the Syrian border town of al-Tanaf.

The source didn’t clarify if the U.S. is planning to establish the new base inside Iraq or Syria. However, Syrian opposition activists claimed that the supposed base will be established on the Iraqi side of the border, near Syria’s al-Tanaf

The new base, which will serve as a command and communication center, may be a replacement for the current base in al-Tanaf. On July 5, the Syrian Hammurabi’s Justice News blog reported that Russia’s Present Vladimir Putin and his U.S. counterpart Donald Trump may discuss a possible withdrawal of U.S. troops from al-Tanaf during their upcoming meeting on July 16.

If the U.S. establishes a base on the Iraqi side of the border, it will be able to withdraw from some parts of Syria and keep any eye on the key roads between the two countries on the same time. Such a move will be directed mainly against the Iranian influence in Syria and Iraq.

For howlong US, NATO and ISIS want to keep Palestinians and Syrians captive for using their lands and resources. When the Palestinian and Syrian toddlers will take breath in the open environment.

The child butcher Trump and Netanyahu the big plunderers want to keep all Palestinians and Syrians hostage for unlimited time. Is it right. I am a human and a US citizen. When I see the life of children here in US and then compare with the children with Middle East so I feel very distress. I cannot tolerate cruelty on any human particularly on toddlers because I am a human. I am not an evil like Trump, may, macron, netanyahu, ISIS etc.

ISIS is the only radical islamic group which cared about civilians and protected their lives as much as possible. Im not talking about those who left islam or the disbelievers of course they deserve to be killed. Today the Islamic state is biggest supporter of human rights and a leading force behind human rights movements in Idlib.

Is that why they are attacking Al Fuqa and Kefrwa the Christian enclaves in Idlib, Ah yes just like the Yanks, the leading force for “human rights”.

You are a creep! I cannot believe what you are saying. So it is ok to kill non -muslims is it? ISIS are dogs and if you love them then so are you!

Im talking about non-muslims in muslim lands eating prok and spreading corruption it is in the holy texts so whats your problem with it?

I suggest you start remembering Syria was Christian well before Muhammad was even born. So Christians can eat all the pork they want in Syria,thank you very much!

I don’t t know who Seth Andrews is or even care. I don’t even Care if Christianity is false. So Mohammed really did travel to the Mount through the skies did he? I can quote the Koran as well and it says to hpnour Issa (Jesus)and Maryam(Mary). It also says in the latter days Issa will return and Mohammed will bow down and Issa ,with Mohammed by his side ,will show the world the new way. Why didnt you tell us that in your post? Or that the Conqueror of Constantinople was buried with Christian icons in his tomb.

Mention all that if you dare.

All the above is secondary to me. What is important to me is to send as many headchoppers to Paradise as we can.

ISIS and Al-Qaeda have weaken the defences of Syria, Iraq, Libya and Afghanistan etc by creating chaos there. ISIS and Al-Qaeda are making Islam religion notorious in the whole world. That is why now thousands of Muslims civilians are dying. When mobile phone ring with “Allah o Akbar” so people start laughing.

Note – ‘…’ is an Israeli troll posting fake Muslim extremist drivel to antagonize – best not to bother responding to the whole charade.

Occupation by the back door,its a non runner.What are he Iraqi forces going to do about the american occupation,i thought they were going to give the zionists their marching orders?

I have become weary with the never ending “Unnamed sources” that keep the “news” media chugging along.

My “unnamed sources” say that Iran will be withdrawing from Syria, and then the US. (No ideas about any bases). That the Trump, and Putin summit will be considered the end of the first stage in undoing the “Hillary Clinton s**t”.

That no side will lose face, but that the carnage that Syria and her people have, and will continue to endure is beyond belief.

That there will continue to be skirmishes in Syria as the people return. They will be localized conflicts.

Many awards and medals will be given out to everyone and their dog, and then perhaps the Syrian people can begin to heal.

Then the focus will be returned to the US. It is pitch fork time.

as
Reply to  Snowglobe

Yeah it’s about to implode. The soldiers pulled back to home may find themselves repressing the civil uprising as a final job for empire army. When the dust settled the bandits subordinate would each pick themselves whatever left of their bosses remains for themselves then rolled it to the ditch after some desecration done.

Snowglobe
Reply to  as

Yes, we are definitely sitting on the edge of things.

A couple of other things I remembered from “undisclosed sources”.

A slow demolition is going on. In time, Iran will be returned to the hands of the people. The last country that will be focused on is Israel. I have no idea what that is going to mean.

The plunderers of US and Europe have been secretly entered and holding civilians in Palestine and in Syria hostage for using their lands and resources for unlimited time.

This may be broacast over loadspeakers at the US base, lovely.

Why? Its nasheed for the muslims not the greedy crusader occupants and murderers.

How’s the weather in Israel – you still in posting from Moshav-Yatzitz, out near Ramla? This charade of Israeli’s posting as fake Sunni Muslim extremists is getting really old.

Ok then still the Israeli air force is top but Assad fails to realize that, remember “latest” svoiet tech in his hands? https://youtu.be/Kcw2hu0DV44?t=3m17s

You are really not very good at this are you. Syria has defeated the foreign proxies and it won’t be carved up a-la the Oded Yinon Plan – suck it up Princess, Israel lost.

Yes i live in Israel and i still dont know how you figured out my location before but im muslim and thats all what matters.

Lol and here i thought that their withdrawal would be to ease their burden in overuse of their military for the Israel security. Guess not. Since it’s like that the US should announce drafting to curb their unemployed as well to add more meat for their loyal sacrifice.

Going to build a little base US, not going to do you any good.

Apparently it’s at Al Qaim according to the Turks on the Iraqi side as Iraq hasn’t authorized any new US bases yet.

Nobody saw this coming?

Iraq would be just as dumb to allow this as Syria would be. Haven’t the Iraqis had their fill of ignorant Americans in their country ?

That’s what I mean. I’d think the last thing they’d want to do at this point is roll out the red carpet for more American troops. Who knows , maybe they like it.

Its in the desert no one cares in Baghdad.

They’re building an IED engineering academy and that’s about it.

I know people are not happy. But Can I please present a Perfect Example of optics? https://voat.co/v/whatever/2633690 The Jew Is lying, teaching the people who visit a website. Pay very close attention. Hooktube was targeted by google because people honestly used it just to avoid google advertisement revenue. Its OK tomorrow will come. A Perfect example of how optics works.

the new base us situatedin kurdistan irak!!

An American base on the border? That’s new. Al Tanf will be replaced by something just as indefensible and expensive? Sounds like the American State Department to me.