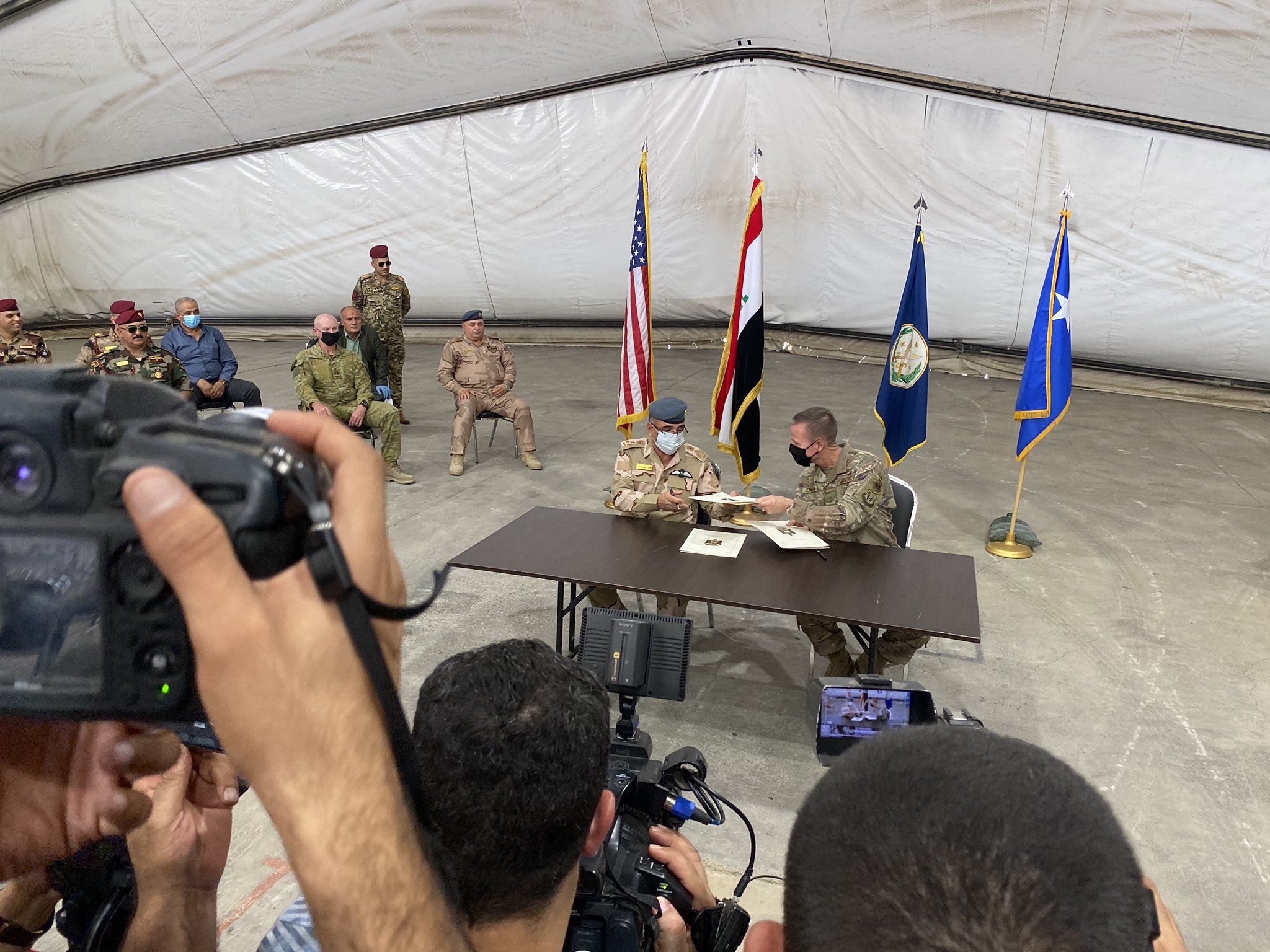 On August 23, the U.S.-led coalition handed over  Camp Taji, one of the largest bases around the Iraqi capital, Baghdad, to Iraqi government forces.

In an official statement, the coalition said the transfer was a result of Iraqi Security Forces’ recent success in the ongoing campaign to defeat ISIS remnants in Iraq.

“This is truly a historic day,” said Maj. Gen. Kenneth Ekman, deputy commander of Combined Joint Task Force-Operation Inherent Resolve. “For the past six years, Camp Taji has served as a primary installation for Coalition partners to train the Iraqi Army, Iraqi Air Force, and the Qwat al-Khasah. The Coalition’s efforts have enabled the Iraqis to train themselves. From this day forward, the ISF will take full responsibility for the facilities and programs at Tali and continue to use the site to lead and conduct training as part of the mission to defeat Daesh remnants.”

Up to 2,000 troops of the U.S.-led coalition were stationed in Camp Taji. Most of the troops left the camp over the summer.

The U.S.-led coalition said $347 million in equipment and property in Camp Taji, including ammunition, were transferred to the Government of Iraq.

According to the U.S.-led coalition, more than 47,000 Iraqi security personnel were trained at Camp Taji on infantry tactics, marksmanship, operations planning, combat medicine and intelligence analysis.

In the last few months, a series of rocket attacks targeted U.S. troops in Camp Taji. An attack on March 11 claimed the lives of three coalition service members.

Camp Taji is the 8th Iraqi military base to be evacuated by the U.S.-led coalition this year. President Donald Trump informed Iraqi Prime Minister Mustafa Al-Kadhimi during his recent visit to Washington that U.S. troops will complete their withdrawal from Iraq in three years.

I guess we should just watch as to where to most attacks are being launched at, to know where the next coaltion base is to close.

Even Stevie saw that comin’…sing it.

Less globalist Ziocorporate US terrorists in Iraq is great progress for Iraqis. Iran’s gotta ramp up efforts to support the liberation of Iraq, Syria, Lebanon and Palestine, from foreign terrorist invader scum.

Public relations to transform retreat into victory, the Iranian missiles have hit the mark, much more than the simple headaches that the commander in chief had spoken of, sadly and quietly they are abandoning the bases one by one, obviously also the rockets of the rebellion spreading like wildfire have done their part, at the same time that Syrian tribes, more than 50, have declared war on the invader, and we are only at the beginning.

Yes, the ball is definitely rolling and not a peep of it in the US press.

We want that US civil war to start RIGHT NOW . They even start to attack and kill kids in US. How much lower they can go?!

America lost claim to moral supremacy with illegal Iraq invasion in 2003. All the world witness blood and tears of fake-WMD. Now just an aging animal in the wild where only things increasing besides embrace of ignorance are American irrelevance and fake stock market value. Social media shows the savagery and stupidity of typical American when it is unleashed. Nothing like sanctimonious, white-trash, blm, fat-ass bitch with black bf to scratch that moral itch. Sharpen the machetes now in case the guns are gone soon. Ha, ha, will then only BLM have guns? After all, they like butchery of human animal in all its splendor, cannibalism not to be damned but flaunted as fashionable accessory. All while the U.S. politicians are taking a knee. Cha-ching.

Is the chair ready to be placed against the wall?

Since the democrats invasion of vietnam in the 60s,usa lost their good reputation: ever since both partys have been as guilty of cia governance,seens cia is usa top dog!

It happened long before that.

In the last few months, a series of rocket attacks targeted U.S. troops in Camp Taji. An attack on March 11 claimed the lives of three coalition service members.

iraqi Force And PMU should becareful fo this US zionist intention. they are shifting towards kurds area to prepare new isil attack on iraq similar to 2014. Kurdistan will be invole in this criminal act.

This is great, I hope they don’t get lost on their way out of the region and wind up in east Syria.

the us empire is dust—thye hate each other

Don’t hold your breath, US Government lies. US military has been leaving for quite some time. Several times, still there. There’s no way in Hell US is going to walk away from it’s masters oil. They’re up to something.