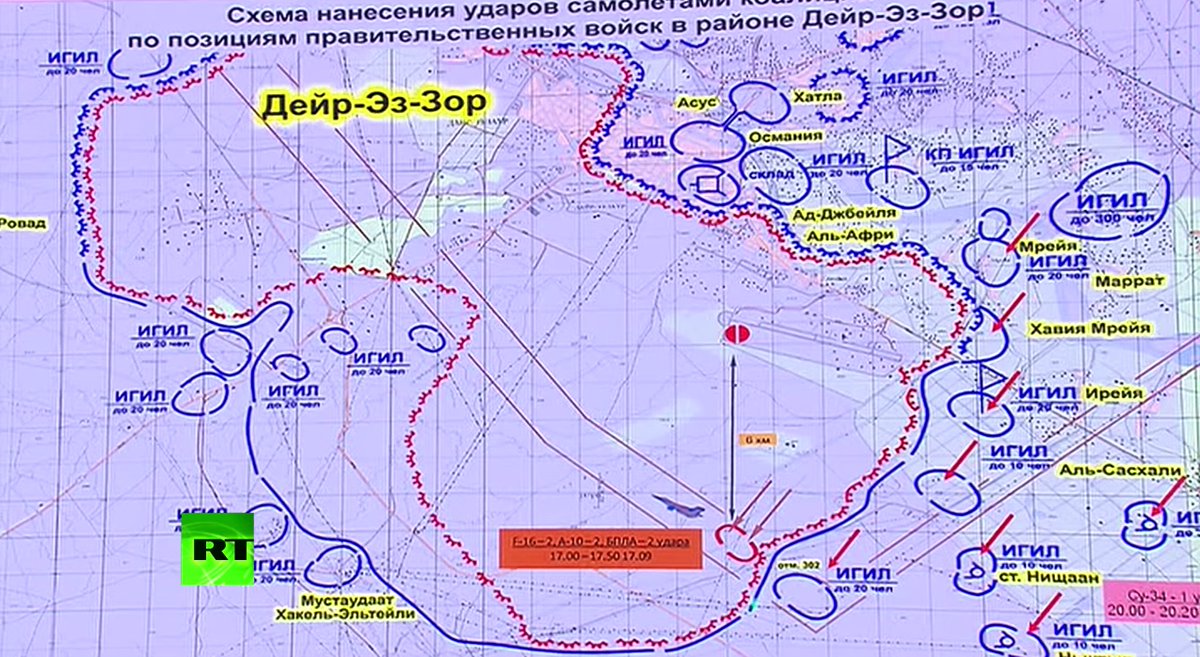 Details of the last attack:

“Today at 17:00-17:50 Moscow time, international anti-Daesh coalition (two F-16 and two A-10 jets) carried out four strikes on Syrian government forces’ units encirled by Daesh near Deir ez-Zor airport. The coalition’s aircraft entered Syrian airspace from the side of the Iraqi border,” Maj. Gen. Igor Konashenkov said.
…
As a result of the attack, 62 Syrian soldiers were killed and some 100 others were injured, according to information received from the Syrian command in Deir ez-Zor, he said.The Russian Defense Ministry said that Daesh terrorists launched an offensive soon after the US-led coalition aircraft attacked the Syrian government forces.

The death toll is likely to increase.

Earlier today the Syrian Arab Army had announced that 1,000 fresh soldiers arrived in Deir Ezzor to liberate it from ISIS.

The U.S. planes came from Erbil in the Kurdish separatist region of Iraq.

The Syrian troops were holding positions on Jabal Tharda, a mountain that overlooks Deir Ezzor’s airport. The mountain is now fully under Islamic State control. With this IS has firecontrol over the airport and the Deir Ezzor garrison as well as more than 150,000 civilians living under government protection are thereby cut off from supplies and any further reinforcements. Government forces have launched a counterattack to regain the vital position.

At the same time the Israeli air force attacked Syrian positions in the Golan height after al-Qaeda lobbed a mortar towards Israeli forces signaling the need for support. This has become the official format of Israeli support for al-Qaeda in the area with Israel claiming that the Syrian army is responsible for any and all attacks from the Syrian side no matter who initiates them.

Intense attacks from inside the surrounded, al-Qaeda occupied east-Aleppo on Syrian government positions were launched in the late afternoon local time. Fighting there is ongoing.

The U.S. air attack on Deir Ezzor was certainly not a mistake but well planed.

It is a signal to Russia and Syria. I am not sure though what lunacy it is supposed to convey.

I wonder are we once again, played, this time Im not impressed, just sad. And this is once again the Turks.

This time, Russia, when the storm comes make shure that Turkien is bombed back to pre-stone age level, and make shure than the rest of that Tribe is erazed from face of this earth.

The rest should simply sink the UssA fleet with an massive salvae of Missiles, sink it all. The rest will do nothing.

The UssA/Israel/Turks will continue to provoce to their get their responce, and why not give it to them, and clean the Middle east of the scums of this earth.

There will be no peace before the last Yankee is hanged from the nearest possible lamp post. When will you learn, this is an evil force of nature, and wars are their domain. They have no morale, no consciousness of others, they simply dont care, of millions died in europa what do you think the Yankees will think, if not an Khardashian comes in the way. America is an sick, sick nation. Whatever it was, is dead an gone, and exists in fairy tales only. Until their own comes back in body bags the Yankees dont give an shit. Humanity have only one problem, the UssA.

wake up or die sleeping.

I agree except the last yankee on lamp pole part. Many of us here would welcome the destruction of the criminals posing as the us central government. The approval ratings of the so called congress and president reflect this. Some states are starting to position themselves to secede as well from this illegitimate and unlawful central government and could use all the help they can get from other parts of the world in this. The power of currency creation has to be taken out of the control of private banks in order for the means of ruling by the western central banks to be eliminated.

Agree with all you say about the degenerate Useless Stupid Americans, but it is not them, they are too stupid to realize they are being fucked in the ass by Israel.

As this article points out, Israel is the command center and recruiting center and medical center of Terrorism which targets us all. Time for anti-terror bombing runs over Tel Aviv, and regime change. Time to smash terrorism at it’s source. https://holodomorinfo.com/

How much more proof is needed that the Anglo-American Empire created and supports ISIS? When shall China and Russia realize that said Anglo-American Empire shall only be satisfied when EVERY country in this world is a province of that Empire? The U.S. is doing every thing that it can to start World War III and (as insane as it sounds) WANTS a nuclear exchange! If it can’t have the world, it would rather see it destroyed! Besides, how else would you rid the world of 7 billion “useless eaters”. The U.S. government has been run by psychopaths since Bill Clinton’s regime!

WILL YOU PLEASE STARTING SHOOTING THEM DOWN???

Unfortunately there will be no direct confrontation between Russian air force and US or Turkey neither will Russian air defense protect SAA. Syrians will have to fend for themselves the best they can. Past actions determine the future ones. Russian government has been held a hostage to the Turkish gas pipeline. By all what we have seen until now it looks like Syria has been used as a bargaining chip.

Agree with you there, Russia in its present degraded form will not start a fight nor respond in kind. Sad but true. These people don’t seem the descendants of heroic soviet soldiers, shame on them.