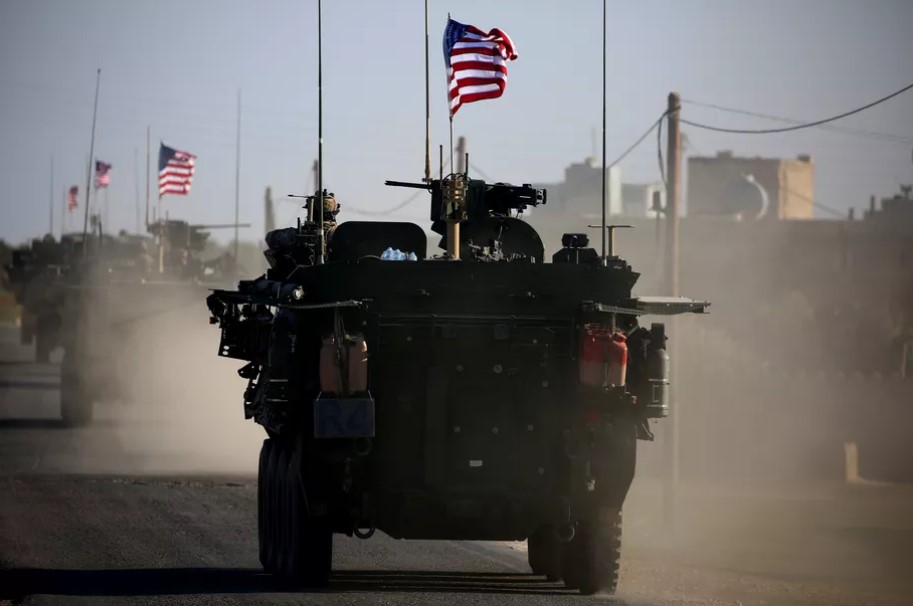 The U.S. is “preparing to evacuate” about 1,000 U.S. troops from northern Syria “as safely and quickly as possible,” Defense Secretary Mark Esper told CBS News on October 13.

Esper told the CBS’ “Face the Nation” that U.S. troops remaining in Syria were caught between Turkish forces and the Syrian Democratic Forces (SDF).

“In the last 24 hours, we learned that [the Turks] likely intend to extend their attack further south than originally planned, and to the west … We also have learned in the last 24 hours that the … SDF are looking to cut a deal, if you will, with the Syrians and the Russians to counterattack against the Turks in the north,” Esper said.

Local sources in northeast Syria said that U.S. forces are already withdrawing from the city of Ain Issa and the border town of Kobane in northern Raqqa. It’s still unclear if the forces have left the country yet.

Esper’s statement comes amid a Turkish-led military operation in northeast Syria. Turkish forces are working to establish a 120 km wide, 30 km deep “safe-zone” in the region.

Russia and the Damascus government have not talked yet about any possible deal with the SDF. The last year witnessed several talks between Damascus and the Kurdish-dominated group, all were fruitless.

The withdrawal of US troops is another sign that the Turkish operation against the SDF is in fact coordinated with the US. By this, the Trump administration achieves two key goals:

yeah stop this waste of money and let the world get on with it!!

A big lesson to all who would consider aligning with French, UK, US and evil co-conspirators, F.uk.us. You are our bestest buddy until you become disposable. We break or enforce international rules at our whim. This was true long before Trump showed up, so, same old story.

Find and align yourselves with those who make and keep their agreements. Do not believe any statements coming from MSM or at best reverse the lies and see if they don’t make more sense that way. Such as, does it seem likely that the SDF has been protecting ISIS “captives” until their next deployment?

you are the bomb man!

Thumb up mate. Kind reminder for ambassador Stevens who apparently was not in line with State department back then too.

The Kurds need to wake up accept the US has betrayed them & cut a deal with Assad.

The problem is the Kurds had no incentive to negotiate with Turkay as long as US troops were there. Now they are forced to negotiate with either Turkey or Syria. Trump’s move makes sense and at the same time he gets US troops out, keeping his election promise to do this.

Some kurds are like the french in Diem Bien Phu………defeated, without scape, but waiting for the USA!!

Worry not! I think, Hollywood will show us, in next couple of years, how brave American soldiers save a crowd of innocents Kurds from unnamed evil islamists. And, of course, there will be a beautiful Kurdish lady which will screw with the American team leader at the end of the movie.

Hollywood will be “inclusive”……..a US soldier will get a pretty kurdish boy too!!!!!

Oops. I am always forgetting the agenda. But why Kurdish boy and not a brave YPG soldier, who will screw the guy?

oh God! you are a legend!

Many a true word is said in jest, Harry :)

So, a few bombs and bullets and the US packs up and runs. We just DD’d out of Qatar after the attack by Yemen. Now we are doing the same in Northern Syria. I am glad that our troops are moving out of there. We had no business being in the country in the first place, outside of the ‘business’ ( knowing the Clintons and Co. probably criminal activities in sheep’s clothing ) deals that were being cut in order to create the war.

I terms of President Trump, I don’t like him as our President but, imagine if Hillary had gotten in office. It could be much worse than it is. My take. I wish well to all.

That is, if your troops really return stateside and don’t go to, I don’t know, Iraq or Saudi Arabia. Wholeheartedly agree on Hillary.

Yeah, the Donald has said weeks ago, that he needs the bases in Iraq in the future to house troops from Syria. But i guess this wont last that long too.. ;) Then the Saudis may be happy to pay for an even bigger occupation by more US forces.. ;)

In fairness to the many US soldiers with courage who feel that they have abandoned the Kurds, it is better to cut and run than to fan the flames of another 20 year + war that has achieved nothing except the deaths of poor people in Afghanistan and the enrichment of the scumbag US politicians and the filth they surround themselves with.

Hey Florian. It has always been the politicians, in my day and before I served.

I think it’s oligarchs who carry polis in their back pockets. Must say when you employ nearly all the greatest minds to write lies after a while it seems even the 1 percenters believe. Reality is taking some pretty big bites here lately.

There are rumors of Cankles returning as Plan B if Biden fails.

From the US msm reports that I’ve looked at. It’s unclear if the US forces are moving further south of the hostilities. Or east to Iraq in a withdrawal from Syria.

“We are not abandoning our Kurdish partner forces and US troops remain with them in other parts of Syria,” Esper told reporters at the Pentagon. As far away from the Turks as possible but we support those Kurds that are dying with our best wishes that they die quickly with as little pain as possible. We do care afterall.

Reports are starting to appear in the US msm of a complete US withdrawal from Syria:

“A US official familiar with the situation on the ground said earlier Sunday that US forces in Syria are preparing to withdraw from the country.”

Looks like America want the Kurds to join with the SAA and Russia and that they fight Turkey while they watch clap and cheer from the safety of the sidelines. Tis better to get others to fight each other that you don’t fancy fighting yourself.

Trump says he wants to get out so far he hasn’t.

Tis even better that Erdogan rounds up all his mercenaries and buys them a one way ticket to the EU.

There are many Extinction Rebellion cultists who would welcome a helping hand to undo 200 years of industrial progress in Europe and to create another wasteland such as Raqqa and Mosul :)

SAA to enter Manbij and Ayn-Al-Arab!

Really its going ahead?

I hear that our old pal Jacob has now cut off his nose in order to spite his face :)

Except thats just the North of Syria” meanwhile US troops are running to secure Syrian oil fields in the South. Bastards. Im sure Turkey knows about that too.

“THE Lebanese broadcaster al-Mayadeen said on Sunday the Syrian army would deploy within 48 hours to the town of Kobani which is held by the Kurdish-led Syrian Democratic Forces and the nearby town of Manbij which is controlled by SDF-aligned forces.”

The betrayal of brother in arms I would never believe that the US was capably of such a betrayal, but I should have known: America has always fled the real fight even if this means leaving his brother in arms behind, never it won a war on his own and now it shows it has no honour or princips, it surrenders to a tyran and blackmailer and violent suppresor. These people fought for you and us,alone, while Erdogan was supporting the Islamic State, they suffered to safeguard your soldiers. Erdogan is going to invade, chasing up, raping, murders, suppressing as he does in Turkey and ethnic destruction with the help of you and a bunch of scum now sitting in Idlib suppressing civilians. This is a genocide, in Nuremberg they tried the Nazi war criminals, I hope the tribunal gets up again to try America next to Erdogan and hang them, as they did then for less crimes. I am disgusted by the US and what it stands for and will proclaim this where and when i can. I am ashamed to be a former friend of America and to be a European. I will help the Kurds where and when I can and boycott the US and Turkey. You are not what you proclaim, is that the reason the world is rejecting the US now-days and that you have those disturbance inside the US? ,

The Kurds got paid and armed. Have you expected a nanny for the rest of your life?

Look around what Trump and you missed, what the rest of the world reject and why the US is gone suffer the next decenia. And I do not talk about a mistake I talk about deliberately abandon on brothers in arms, about being aliened with

a deal has been made between Syian government/Russia and the kurds, and the syrian army is racing north and east

Is it true every time the US does a move it causes fuel shortages world wide? The tree huggers oughta look into that. Ship all the boys home, keep em there, CO2 plummets soon after. Just saying.

Now that the Kurds have come to their senses will they let those gals go back to raising kids and other important work, for God’s sake! Enough with the photo ops already. Although must say easier on the eye than those head choppers.

What about the joo scumbags. Where are they?

Trump heeds help and fast preferably from a shrink psychiatry, ore a whole clinic and battalion of philosophers and moralists.