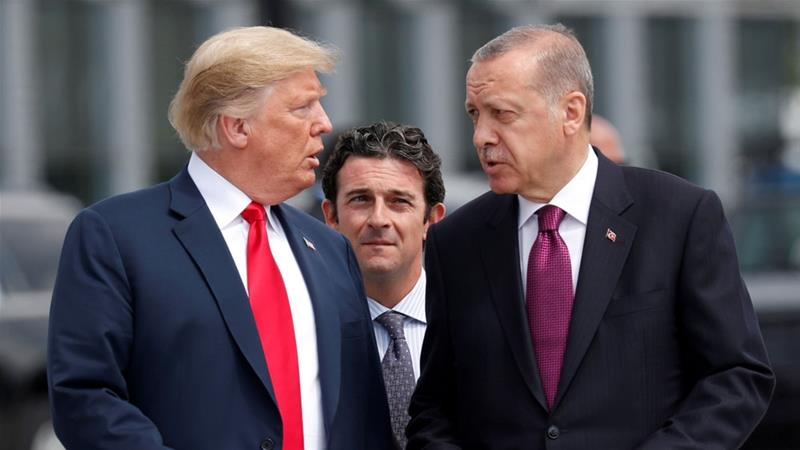 On August 1st, the U.S. Department of the Treasury’s Office of Foreign Assets Control (OFAC) imposed sanctions on two Turkish officials in an attempt to convince Turkey to turn over an American Pastor, Andrew Brunson, back to the US.

Reuters cited U.S. Secretary of State Mike Pompeo, who on his way to Singapore, while in Anchorage, Alaska said that the Turkish government refused to release Brunson “after numerous conversations between President Trump and President Erdogan and my conversations with Foreign Minister (Mevlut) Cavusoglu.” According to him, President Trump also agrees that the sanctions are the correct course of action.

The sanctions are against Justice Minister Abdulhamit Gul and Interior Minister Suleyman Soylu. Both of them are blamed for imprisonment of the Pastor. In its statement the US Treasury Department said that both ministers “played leading roles in the organizations responsible for the arrest and detention of Pastor Andrew Brunson.”

In a written statement, also on August 1st, Turkey’s Foreign Ministry condemned the decision of the US Treasury Department and said, “An equivalent response to this aggressive attitude will be given without delay.” The ministry also called on the Trump administration to retract it’s “wrong decision.”

Foreign Minister Mevlut Cavusoglu in a tweet said that “U.S. attempt to impose sanctions on our two ministers will not go unanswered.” He also continued by stating that the two countries will not resolve any issues unless the Trump administration accepts that Turkey will not give in to unlawful US demands with this method.

The Justice and Development (AK) Party as well as the main opposition Republican People’s Party (CHP), the Nationalist Movement Party (MHP) and the Good (IYI) Party said, “We say ‘no’ to the U.S. threats with common solidarity and determination of our nation.”

Anadolu Agency cited Justice Minister Gul who posted on his twitter account that he does not own any property or have money outside Turkey.

Turkish Interior Minister Suleyman Soylu reacted to the US decision on twitter by posting: “We have a property in America: FETO. We will not leave it there. We will get it.”

The Fetullah Terrorist Organization (FETO) is Ankara’s description of an organization led Fetullah Gulen. The group is allegedly responsible for the defeated coup attempt in July 2016 against Turkish President Tayyip Erdogan’s government. The coup left 251 dead and more than 2,2200 injured. Turkey also accuses FETO of organizing a long-term campaign to overthrow the state through the infiltration of Turkish institutions and specifically military, policy and judiciary.

Pastor Andrew Brunson was apprehended and charged with spying for the PKK, the Kurdistan Workers’ Party, which according to Turkey is a terrorist organization and FETO. He was arrested in October 2016. On December 9th, 2016 the Izmir 5th Penal Court of Peace ordered Brunson’s continued detention.

On July 25th, 2018 the 2nd High Criminal Court in Izmir decided to turn Brunson’s detention into house arrest due to his health problems. On July 31st, the court rejected an appeal to release Andrew Brunson from house arrest. The reasoning behind the rejection was that the “strong criminal suspicions” against the suspect have not changed their nature.

Izmir Public Prosecutor Berkant Karakaya’s indictment said that Brunson acted in accordance with terrorist groups’ strategies under the pretext of being a man of religion. It adds that he cooperated with the groups, despite knowing their aims. He was mentioned as getting in touch with FETO’s high-ranking members via their aliases. He was accused of getting in touch with FETO fugitives Bekir Baz, his assistant Murat Safa and Amnesty International’s Turkey branch head Taner Kilic, who is awaiting trial in prison for “being a member of an armed terrorist group”. 293 close GSM signals were detected from Brunson with fugitive Bekir Baz by the technical investigation. He also allegedly sent a message to a US soldier expressing sadness over the failed coup of July 2016. Anadolu agency cites the text message as saying “We were expecting an earthquake to shake the Turkish nation. The conditions returning to Jesus were met now. Many Turks relied on the military like in the past, but this time it was too late. Another blow after the coup attempt. I think the situation is going to get worse. We’ll win at the end.”

US-Turkey relations have been worsening ever since 2016, due to US presence in Syria and its support of the Syrian Democratic Forces (SDF) in Manbij in Northern Syria. On March 28th, 2018, the Turkish National Security Council issued a statement saying “Terrorists in Manbij need to leave the region immediately; otherwise Turkey will not hesitate to take its own initiative as it did in other regions. Turkey will maintain the same steadfastness against terrorist groups east of the Euphrates.” The threat came after US and Turkish diplomats continued their attempts to ease the tension, with Turkey demanding the US to pressure SDF to withdraw from Manbij. As reported by DW, from Turkey’s perspective, the Manbij Military Council is nothing more than a front for the Kurdistan Workers’ Party (PKK)/ People’s Protection Units (YPG) pulling the strings behind the scenes. Ankara says the YPG is the Syria branch of the outlawed Kurdistan Workers’ Party (PKK), which it considers a terrorist organization, as reported by Hurriyet.

On July 27th, in Johannesburg, in South Africa, Recep Tayyip Erdoğan, the Turkish President has called on the leaders of the BRICS countries and namely, Brazil, Russia, India, China and South Africa to perform the necessary actions to allow Turkey into the association. Turkey also recently finalized the deal to purchase the Russian S-400 Triumf missile defense system. As a result of the deal with Russia, US Congress voted to delay the delivery of F-35 jet fighters, in the development of which Turkey is a partner with up to 90 days pending an investigation of US-Turkey relations.

These developments, on top of US concerns over TurkStream and the Kurdish issue are further pushing Turkey towards an increase in cooperation with Russia and its allies.

“Turkey also accuses FETO of organizing a long-term campaign to overthrow the state through the infiltration of Turkish institutions and specifically military, policy and judiciary.”

Yeah, thank God we don’t have that kind of problem in the U.S.! The ‘interests’ that have infiltrated U.S. institutions, U.S. policy and the U.S. judiciary merely seek to influence them and/or usurp their power and resources. They don’t actually want to overthrow the U.S. government. That would be stupid – why would a parasite want to kill its host? Besides, the chaotic relationship between the U.S. state and its subjects is great for keeping the attention off the traitors and their perpetual looting.

Soon mister Trump Will Have Sanctioned the Whole World…Don’t Forget to Sanction the Penguins on Antarctica Mr. Trump! They are Responsible for Melting the Ice with their HAARP-System… They want to Drown all the Humans… They are a Threat to Global World Peace & Humanity… Please come & Save us Mr. Trump….

The World Will Soon Sanction Your Country Mr. Trump… together with your IsraHelli Buddies… You are on Your Own…

They interfered with the elections in the USA as well!

Yeah because of his morronic tariffs, there is a beer can shortage now…WTF!!!

Your Beer Cans were pulverised and became Airborne….but for a good cause: to Fight Global Warming…so that you can have a Cold Beer

Brunson sounds like one of the lunatic Millenarians. As much as I despise Turkey, credit where credit is due, so if the charges of cooperating with PKK, etc., are true he broke Turkish law and the US has no right to demand his release.

I agree ;probably an Evangelical Protestant ,of those who prop up the goverments of late and the ziocons.

“..US-Turkey relations have been worsening ever since 2016, due to US presence in Syria and its support of the Syrian Democratic Force..”. Poor America and Turkey have had a lover’s quarrel. It was ok when Arabian,Qarari andUs miney was going to the Isis rebels being trained in Turkey. Now though ,they are all upset.?

Funny how America did not impose sanctions on the two politicians when they let the jihadi beheader of two Christian BISHOPS go free. It seems a spying lowly “pastor” is more of a victim than two real Men of GOD!

May God rain hail and brimstone upon the headchoppers’ heads. Then finish off all the Zionatoyankees who brought these headchoppers into being!

The extent and strong pressure that the Deep State exerts on Turkey to release this “holy man” can only mean that he is one of them, a CIA asset. Many a Christian priest has gotten beheaded by CIA/Al Qaeda assets, and the military aide continues to flow. However, the US now wants to cut off military aide to Turkey.