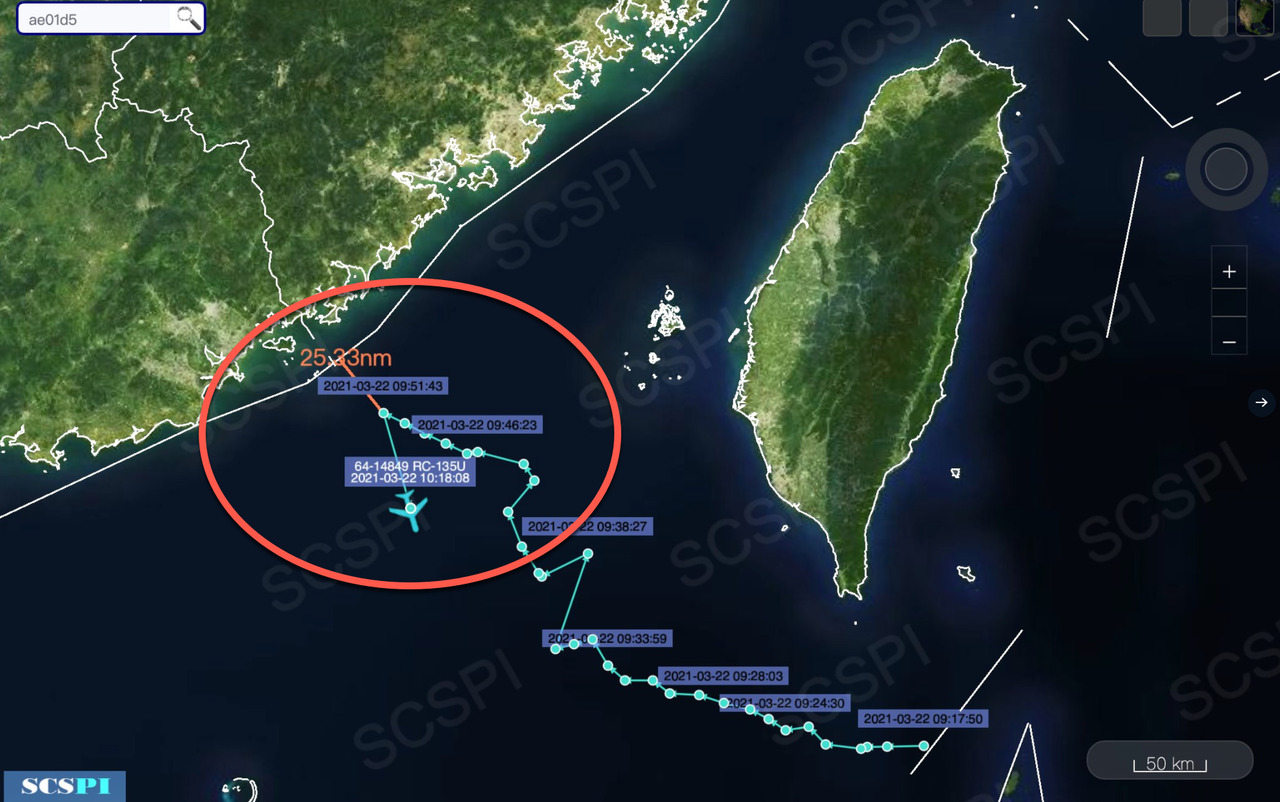 On March 22nd, a US spy plane set a new record of flying the closest to Chinese airspace, ever.

USAF RC-135U Combat Sent #AE01D5 just set a new record of 25.33NM, the shortest distance US reconnaissance aircraft have reached from the China's coastlines, based on public data so far.

In addition, there was also a P-8A & an EP-3E spotted over the #SouthChinaSea, March 22. pic.twitter.com/uLv49u70Gv

At least according to public data, the 25.33 nautical miles’ distance is the closest on record.

The RC-135U, serial number 64-14849, which was visible using online flight-tracking websites under the transponder code AE01D5, had been preceded by a U.S. Navy P-8A Poseidon maritime patrol aircraft and an EP-3E Aries II intelligence-gathering plane operating in the South China Sea, all in the course of March 22, the SCS Probing Initiative noted in a Tweet.

The RC-135U, of which the Air Force has just two, is specifically configured to gather electronic and signals intelligence, with a particular focus on collecting data regarding adversaries’ radars and air defense networking nodes.

This type of aircraft collects information about electronic signatures to help commanders build so-called “electronic orders of battle” detailing the disposition of an opponent’s air defenses. This includes detecting and classifying threat emitters, and pinpointing their locations, among other electronic intelligence-gathering capabilities.

Days earlier, likely the same RC-135U was spotted above the Spratly Islands.

USAF RC-135S is operating in the airspace near Spratly islands, March 19. It's very rare to see RC-135S here, is there any ballistic target? or wrong ADS-B signal? pic.twitter.com/H8UWg3dQaS

A report was earlier published by the SCSPI on US Military operations in the South China Sea in 2020.

The US successively sent the #TheodoreRoosevelt, #Nimitz and #RonaldReagan CSGs to the #SouthChinaSea in 2020, it's worth noting that whose operations were unlike routine patrols in previous years, but highly resembled live combat.
Read more about SCSPI yearly report here:

The report can be found here. [pdf]

Even though COVID-19 wreaked havoc worldwide in 2020, the US military continued to carry out intensive military activities in the South China Sea, with their strategic weapon platforms, typically carrier strike groups, strategic bombers and nuclear attack submarines, operating in the region frequently, posing unprecedented deterrence against China. In the meantime, the US Navy and Air Force continued to conduct frequent reconnaissance operations in the region, deploying a mix of reconnaissance aircraft, including those of civilian contractors, to the South China Sea, all of which built up strong momentum for battlefield construction and warfighting readiness across the US military.

The report concluded the following:

“In 2020, the US military exerted maximum pressure in the South China Sea through a raft of intensive moves, such as deploying various strategic weapons platforms to the region, frequently operating near China’s stationed islands and reefs and transiting the Taiwan Strait, in an attempt to display its military power and deter China. However, the US is gradually losing such military dominance in the Western Pacific despite its evident military superiority globally, as China has been delivering much more targeted and effective countermeasures. Overreactions and excessive deterrence of the US military will not contribute to peace or stability of the region.”

And then they accuse China of being assertive, without feeling embarrassed, I imagine that in the Chinese defense systems someone prayed that they would come a little closer so that they can shoot them down without excuses, whoever looks for it sooner or later finds it.

Uncle Sam has forgotten what happened on Hainan Island. Looks like he wants his planes sent back in pieces – again.

A small incident in itself, but one of many that follow a historic pattern. https://www.ghostsofhistory.wordpress.com/

Going to get their balls chopped off at some point.

With a big axe or a pocket knife?

They do because no one ever calls their bluff.