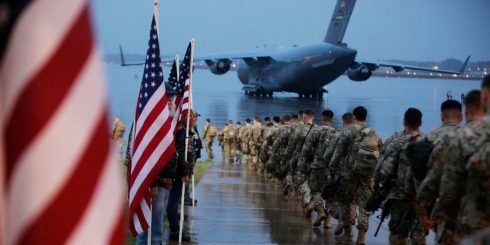 The U.S. is transferring military equipment and airborne units to Europe.

On February 7th, at least two U.S. military C-17A Globemaster III cargo aircraft with military equipment and units of the 82nd Airborne Division on board arrived in Poland.

The first C-17A Globemaster III landed at Rzeszow-Jasenka airport in southeastern Poland. It reportedly took off from the Dover Air Force Base, Delaware.

The second aircraft took off from the Fort Bragg Army Base, North Carolina. It landed at the same Rzeszow-Jasenka airport, located 90 km from the border with Ukraine.

Another U.S. aircraft has reportedly taken off from the Fort Bragg base and is expected to arrive in Poland.

According to the US Army Command in Europe, an advanced group of U.S. paratroopers arrived in Poland on February 6th. A military cargo aircraft delivered the commander of the 82nd Division, General Christopher Donahue as well as dozens of military personnel and equipment to Rzeszow-Jasenka airport.

Pentagon is going to deploy a total of 1,700 U.S. paratroopers of the brigade combat team of the 82nd Airborne Division in southeastern Poland in order to strengthen the NATO eastern flank amid the allegedly growing tensions between Russia and Ukraine.

On February 4, the first three C-17A Globemaster III aircraft with units of the U.S. 82nd Airborne Division from the Fort Bragg base arrived at the Wiesbaden Air Base in Germany. 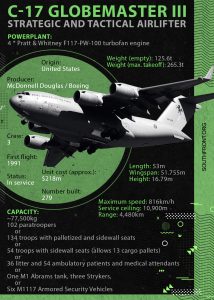 On February 2, Pentagon spokesman John Kirby claimed that U.S. soldiers will be deployed in Romania, Germany and Poland. According to him, these forces will not fight in Ukraine, and the military build-up is only a temporary measure to support the allies.

According to Mr. Kirby, 1,000 troops stationed in Germany should be deployed to Romania, where they joined other 900 U.S. soldiers stationed in the country.

John Kirby claimed that about 3,000 U.S. troops would be transferred to Europe in order to strengthen NATO security. Meanwhile, 8 500 U.S. troops are on high alert and ready for the transfer to Europe.

For its part, Russia is conducting joint military exercises with Belarus (February 9-20), where thousands of troops, Su-35 fighter jets, Iskander missiles and Russian S-400 missile systems have gathered. The Belarusian President Al. Mr Lukashenko said his country planned to buy almost all of its training equipment and set up “more training centers” to train the Belarussian Armed Forces “with the air defense systems and the latest weapons being developed in Russia”. He also stressed that the Russia-Belarus alliance within the framework of the “Union State” acquires special importance vis-.-Vis NATO and Ukraine.

UN, February 6. /TASS/. The speculation of Western countries about how many days Kiev can fall in the course of a potential Russian invasion is madness and scaremongering, Russian First Deputy Permanent Representative to the UN Dmitry Polyanskiy said on Sunday.

“Madness and scaremongering continue. What if we would say that US could seize London in a week and cause 300K civilian deaths? All this based on our intelligence sources that we won’t disclose,” Polyanskiy said in a Twitter post. “Would it feel right for Americans and Britts? It’s as wrong for Russians and Ukrainians”.

Indeed,i could attack the guy next door,the U.S.could invade Mexico,i could go into town shoplifting,the Netherlands could invade Belgium, could could could,they are full of shit but some of the herd swallow it.

Hope the US gay troupers walked with adequate toilet paper, pampers and diarrhea medicine if they are to face off with Russian real soldiers

They wont do a thing, what is 3k paratroopers against the russian army?

Its just a PR show to sell more guns.

Don’t worry people, the US has also shipped 1000s of body bags.

USA, France, Britain should stop hiding the truth. Their git secret bases in U kraine, Estonia, Latvia, Poland, and many more ex soviet states. Now their use a proganda of Russia invasion and equip their secret bases in so call ally lies countries. Let Nato which is a nuclear force pull out from Russian close neighbors. Current flooding of refugees were staged by Erdogan to achieve his promised deal from Nato. Nato illegal confiscated Libya, Iraq and Syrian oil and gases. Which are ship to France, Canada, United States and Britain. Including Turkey. Humanity Russian biggest concern is secret military bases in Ukraine which are used to cause chaosed and war in Don ass to attack Russia.Nato and USA wants war with Russia to speed up the human de population as Corona virus pandemic failed to achieved. Very soon the God Angel will give command to allow the Amagedon to start. Russia should attack USA secret based in all neibouring countries to force Nato USA out.