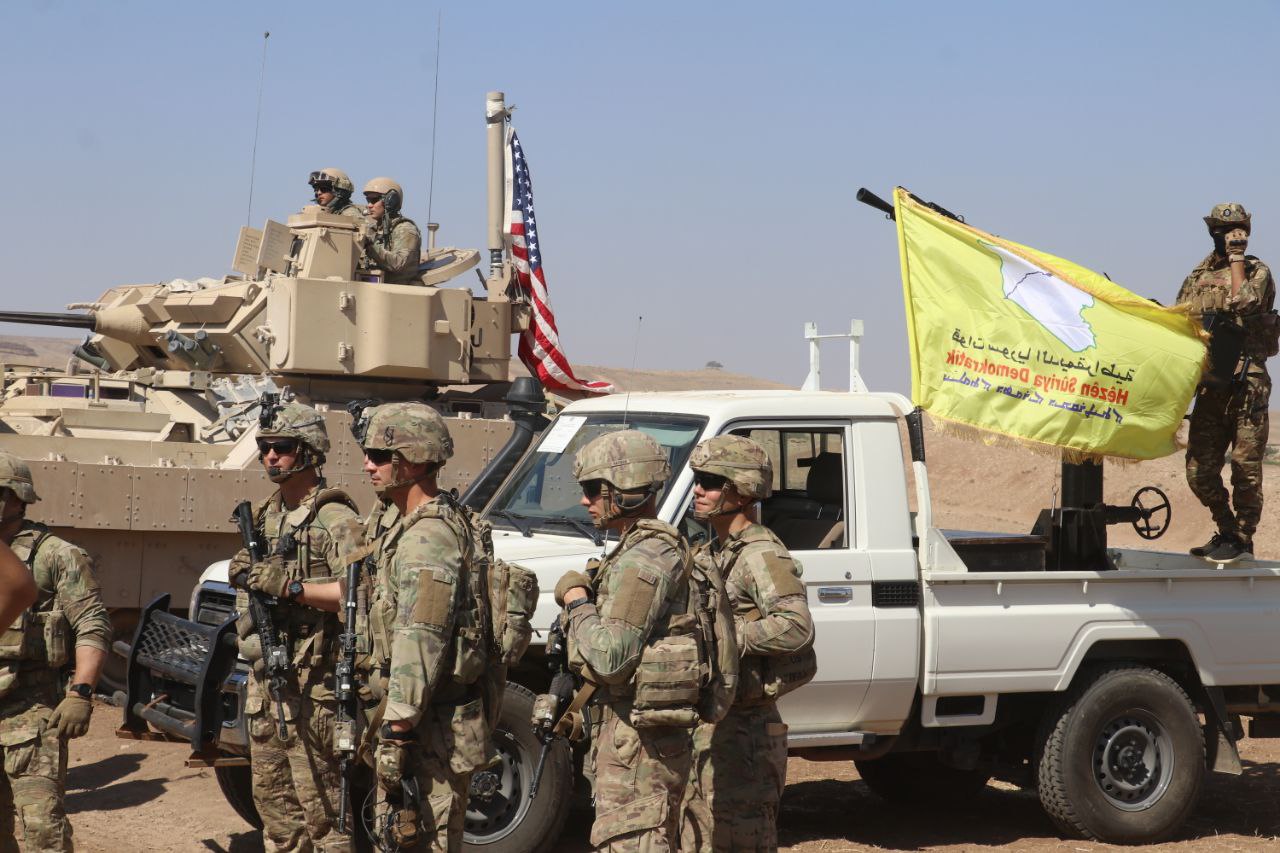 The United States Defense Secretary Lloyd Austin told his Turkish counterpart, Hulusi Akar, of his “strong opposition” to a new Turkish ground operation in northern Syria during a telephone call on November 30.

In a statement, the Pentagon said that the secretary voiced concern over the escalating situation in Syria and expressed condolences over the November 13 Istanbul bombing.

“He also expressed concern over escalating action in northern Syria and Turkey, including recent airstrikes, some of which directly threatened the safety of U.S. personnel who are working with local partners in Syria to defeat ISIS,” the statement reads.

“Secretary Austin called for de-escalation, and shared the (Defense) Department’s strong opposition to a new Turkish military operation in Syria.”

In response to the Istanbul bombing, Turkey launched a large-scale operation against Kurdish forces in Syria and Iraq, codenamed Claw-Sword, on November 20. Ankara believes that the core faction of the U.S.-backed Syrian Democratic Forces (SDF), the People’s Protection Units, was involved the bombing that claimed the lives of six people and wounded more than 80 others.

So far, the operation has been limited to air and artillery strikes. However, Turkish President Recep Tayyip Erdogan has warned that a new ground offensive against the SDF could soon begin.

A Turkish official told Al Jazeera on November 29 that Ankara completed all military and logistic preparations needed to launch a ground operation against Kurdish forces in northern Syria. The unnamed official said that Washington had “shown its understanding” of Ankara’s demands and went on to claim that U.S. troops withdrew from some positions in the region.

Since 2016, Turkey has launched several ground operations against the SDF in northern Syria that have allowed it to control areas along the border.

While the U.S. is against any new Turkish ground operation in northern Syria, it will not likely take any action against its NATO ally.

Russia, on the other side, appears to be willing to do more in order to prevent yet another Turkish invasion of northern Syria. The Russian military grouping in the country has already deployed troops near Tell Rifaat, one of three towns which were recently named by President Erdogan as main targets of any new operation in the region with the other two being Manbij and Kobane.

They “warned” them before did that stop them? No.

Also, what is important to note is Turkey has options… They can attack SDF/PKK/YPG/Kurdish gangs, without really worrying about their region neighbours right now.

These Kurdish rtds OPENLY said they are backing and supporting riots in Iran (Iran is now dealing with Kurdish terrorists). They have opening stealing from Syria and Iraq. They backstabbed Russia, Syria, and Iran when the US offer them a deal. Who in the fuking world support these fuking apes now? The Syrian government and Russia aren’t looking to defend Kurdish gangs, they want to retake those areas from SDF apes so Turkey have no reason to invade N-Syria.

Let the fuking cancer kill the other cancer.

They got this bankrupt turdogan by his balls and he knows it too. The Al-Gurdish problem has no military solution. Stupid turkish guppu fail to understand this. All turdogan can do is to sustain ISIS…….That’s the orders he’s been given and that’s all he’ll ever do.

You shouldn’t fall for their traps, “this or that country is collapsing or bankrupt”. I remember Zionists, Wahhabis and Yaquis pigs dancing and saying Iranians would regime change because of sanctions they put on Iran (years ago), those fukers said Iranians have nothing to eat beside their leaders.

Look who is laughing now… Iran is still under heavy sanctions and look at them go, God speed. What about Syria, they are rebuilding their country slowly? Or what about Lebanon (which really has problems)?

Turkey has FSA and ISIL/Wahabis under their hands in Syria. You should remember Kurdish gangs holding a lot of Wahhabis in N-Syria and their blackmail doesn’t work against Turkey. If you didn’t know Zionists, US and Kurdish gangs are blackmailing Syria with Wahhabis they are holding in N-Syria. If Syrian government try to take back SDF hold areas behind the close door SDF/Kurdish gangs would free Wahhabis and call on the US come with more weapons and troops to “fight against Wahhabis/ISIL” that Kurdish gangs were holding.

Don’t downplay Turkey power, Turkey has the second largest armed forces in NATO after the United States. Also, it is not the first time they doing it… how did the last time when? Turkey freely took areas hold by SDF/Kurdish gangs.

Look this is the last thing I want to show you, “All US civilian personnel, including diplomats, have been evacuated from northeast Syria to Erbil (Iraqi Kurdistan) in anticipation of a possible ground operation against Kurdish forces.”

Yes, but Iran is on the same side with Turkey in almost everything except Syria.

I would disagree with you but you are in your head and never care to listen.

Iranian mollah a****** ..turkeys not bankrupt . TURKIYE economy is booming… Be careful jealousy can kill

Turkey’s economy is not booming. It is slowly growing… but hey nor you or I can see the future.

You are bankrupt. Guppu like you ain’t got no money now. All intellectual turks moved out long ago along with the moneyed elite. Trash left only. Half your country hates turdogan now cuz he’s fucked your economy over and got you involved in Syria and Iraq in a war you can’t win.

Erdogan’s buddies planted the bombs in Istiklal Caddesi or at least hired those who did. He needed an excuse to attack Northern Syria and Iraq. The Kurds are no problem for him, most support him. Even in Syria, they have other things to take care of. Nah, he wants a share of the oil. Kurdish blood will be spilled ad libidinem bc Turkey and US fight over the spoils of war.

No, you thinking only about what’s good about this event for Turkey. Remember Turkey can now push Finland and Sweden away from supporting Kurdish gangs and giving them free protection in their countries.

Who really pushing Finland and Sweden to join NATO? The US. (All US civilian personnel, including diplomats, have been evacuated from northeast Syria to Erbil (Iraqi Kurdistan) in anticipation of a possible ground operation against Kurdish forces).

Which country was against Finland and Sweden to join NATO? Turkey, why? Because they support Kurdish gangs. The US isn’t looking to fight their puppets (Wahhabis) in Syria and Iraq, they know it is a lost for them for now and they have to fight China and Russia. They need more puppets in the EU and Asia – not in the Middle East. They left Afghanistan and started war with Russia in Ukraine. This has been planned out for long time. The US doesn’t have “allies” it has puppets and once they no longer need them they burn them, like how they did it in Afghanistan, SDF/Kurdish gangs are more problems than anything else for the US.

Yes, it is a great opportunity for Turkey… but they wouldn’t bombed their own country, they could have just attack Kurdish gangs and wait for Kurdish gangs to attack one of their bases and that would reason for Turkey to invade Syria/Iraq again. It is about oil and wheat/food… it has been about that for Turkey for years. I don’t agree with on Kurdish people mostly support Turkey tho.

But let’s be fair here, who and why should someone support Kurdish gangs? Even you saying how Kurdish gangs are a reason for Turkey to invade Syria and Iraq to loot those countries. The US support them and now they want to hand SDF/Kurdish gangs areas to Turkey and not Syrian government.

“These Kurdish rtds OPENLY said they are backing and supporting riots in Iran” Why else would the US support them, the deal is they get a part of Iran and Syria if they help the US topple the Islamic republic and the Syrian goverment. Both of which just coincidentaly are unrepenetant Israeli enemies.

PKK/PJAK and MEK were supported by Russia, Assad and Saddam until some years ago. Now MEK is supported by US, PKK by Assad, Saddam is gone and the Russians play both sides.

The US must not interfere now that it is likely that thousands of Islamists and Muslims could be killed.

USA, go home and let the illiterates kill each other at will.

They planned this out buddy – did you missed the memo, “All US civilian personnel, including diplomats, have been evacuated from northeast Syria to Erbil (Iraqi Kurdistan) in anticipation of a possible ground operation against Kurdish forces.”

The US was behind the bomb attack in Turkey and the US pushing small Kurdish gangs to claim responsibility for terrorists attack in Iran. Kurdish people are tools for the US to use and Kurdish people agreed to be the tools of the US.

The only plan of the US that backfired was when they attack Iran, Iran attack Mossad spy network in N-Iraq and only went after anti-Iran Kurdish group in N-Iraq. They also give Kurdistan 10 days which coming to an end and the new Iraqi PM was just in Iran having a talk…

Also, just take the L… there are more Turkish, Kurdish gang members in the EU… this wouldn’t be a big deal and most likely would end like last time, Kurdish gangs running away from Turkish army and attack them here and there… bla bla bla

The US Defence Minister is just repeating my concerns in these comment sections here over Turkey’s interference in our clean up operations of terrorists inside the Syrian territory. US cant use Turkish Bazaar and amateurs when it comes to terrorists.

You are not cleaning up any terrorists (isis etc) because they are your guys anti assad. All a smokescreen.

Well, I suppose the US want the stolen oil (from Syria and partly Iraq) all for themselves. Sorry, Turkey wants a share too. Turf wars. Nothing more, nothing less.

The Objective
Reply to  Dave

This isn’t about oil. Turkey can have all the oil it needs from Qatar, Azerbaijan, Libya, and even Russia/Iran. If it is about oil, then Erdogan wants the oil money to build a new life for Syrian refugees. Remember that they are Syrians too and have rights over the oil wealth of their country. Turkey has spent billions from their pocket helping the Syrian refugees. Russia and Assad wants to just keep bombing civilians brutally as they try to capture everything by whatever means possible. They want Turkey to just stand aside and keep absorbing refugees as if they’ll pay Turkey for the economic cost. All these power hungry lunatics want is to re-establish complete dictatorship over Syria. Sorry, but that ain’t going to happen. You have to share power with the oposition for the Syrian war to end. That is Turkey’s position.

You are kidding though. Qatar, Azerbaijan, Libya, Sudan (Bashir), the most pro-Turkish states were all dictatorships.