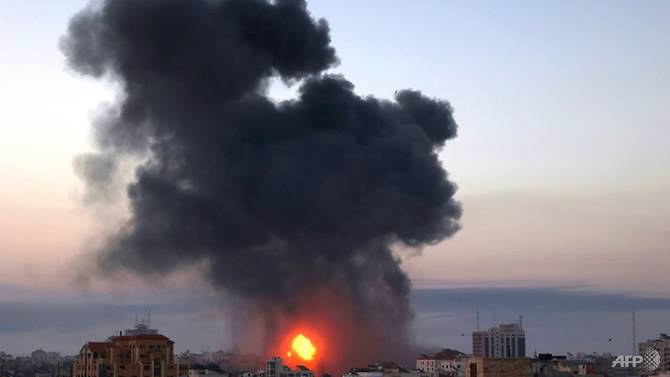 On May 12th, the UN Security Council tried to hold a second emergency meeting on the escalating situation in the West Bank between Israel and Gaza.

A joint statement wasn’t agreed due to opposition from the United States, Israel’s key ally.

According to several sources, 14 of the 15 members of the Council were in favour of adopting a joint declaration aimed at reducing tension.

However, the United States saw the Security Council meeting as a sufficient show of concern, diplomats told AFP on condition of anonymity, and did not think a statement would “help de-escalate” the situation.

“The United States has been actively engaged in diplomacy behind the scenes with all parties, and across the region, to seek to de-escalate the situation. At this stage, a Council statement would be counterproductive,” an anonymous CNA source said.

“The Palestinians have asked for a public meeting,” a diplomat told AFP on condition of anonymity.

The goal would be “to try to contribute to peace … and to have a Security Council able to express itself and to call for ceasefire,” another diplomat said, also on condition of anonymity.

Such a meeting could be organized as early as May 14th, by China, which currently presides over the Security Council.

In Washington, US Secretary of State Antony Blinken announced that a US envoy would travel to the Middle East to seek to calm tensions between Israel and the Palestinians.

After the US move to block a Security Council statement, four Council members from Europe – Norway, Estonia, France and Ireland – issued their own joint statement.

“We condemn the firing of rockets from Gaza against civilian populations in Israel by Hamas and other militant groups which is totally unacceptable and must stop immediately,” the statement said.

“The large numbers of civilian casualties, including children, from Israeli airstrikes in Gaza, and of Israeli fatalities from rockets launched from Gaza, are both worrying and unacceptable.

“We call on Israel to cease settlement activities, demolitions and evictions, including in East Jerusalem,” they wrote.

And Palestinian Ambassador to the UN Riyad Mansour published a letter to the organization’s top officials in which he pleaded with them to “act with immediacy to demand that Israel cease its attacks against the Palestinian civilian population, including in the Gaza Strip.”

He also called for them to demand that Israel “cease all other illegal Israeli actions and measures in the Occupied Palestinian Territory, including East Jerusalem, including a halt to plans to forcibly displace and ethnically cleanse Palestinians from the City”.

UN Middle East envoy Tor Wennesland had warned in the meeting that the “situation has deteriorated since Monday… there is a risk of a spiral of violence,” according to a diplomatic source.

Israel is going to exterminate every single Hamas Member Remember that. Hams will be history,of evil.. Remember that only Islam religion…sorry Islam is not a religion is a cult wich teaches that their Muslim God allows Muslims people to kill every person who is not Muslims and they will go In Heaven and they will have 30 Virgin Womens ( maybe some Goats is more realistic ha ha . And they will not go to hell.. I almost almost forgot. Muslim men can have as many Womens as their hearts wishes but Muslims Womens are not allowed to have more Men’s in their life. Because God said that a Womens are not capable to love more than 1 men but Muslim men’s are capable to love more than 1 women… Can you believe how .F…k up religion is or belief or how brain washed from childhood with this type of teachings. And are forcing Womens to obey their men’s till death.

I heard trolls like you saying that more than 14 years ago. They say it every time. They fail every time.

Religion aside, isn’t what Israel is doing to the Palestinians is mirroring what Germany did the Jewish people in WW2? A slow genocide and suppression of a defenceless population (I hardly call hamas rockets technologically advanced weaponry when compared to the US backed/designed/funded military technology and organised armed forces of the IDF). If the shoe was on the other foot, well, we all know what would happen don’t we? Where is the global outrage? Where is the UN? Where is the coordinated global intervention of Israel’s unhindered assault everyday on the innocent victims of this war?(babies aren’t considered capable of performing military operations against professionally trained and armed IDF members). Don’t answer because those are rhetorical questions. But the point is Israel is doing to others what “supposedly” happened to them in WW2.

Yes. Gaza is the Warsaw Ghetto. The same alibis the jews are using for genocide are the ones the Nazis used back then.

The situation is really complicated. The war for Jerusalem is beeing fought for centuries .. Is only because of religious beliefs … nothing else… Religion divided the world for thousands of years.. but now people are starting to realise that religion is used to control the population. We in Western Civilization we denounced religion to rule our life and we Don’t believe anymore in religion we just believe that has to be someone who made us.. while we in Western world we learned to accept all beliefs arab world are still Backwards thinking.. But the good thing is that they already started to realise that their religion is fu…k up. There’s a long road to freedom but they already started. I know many Muslims and they told me that living a country that force you to learn religion and if you don’t they will kill you is like beeing in jail for the rest of your life.. look at Pakistan ,Iraq, Saudi Arabia and soo on . But Saudi Arabia is starting to change to Western civilization.. is a good thing

Others can find their own way to make rationalization through their own cultural lens.

What saudis need is to adopt rationalization and reasoning. This whole thing is a new concept to them. Not LGBTQ, SJW or uber liberal BS. These gonna hit them hard.

Brainlessly changing to western civilization will only make them look like today’s african american 100 years latter.

I’ve also come across similar people for KSA, UAE, but all in all they end up leaving their own culture out of disdain and eventually loss their own cultural identity, which in reality will make them happy.

Perhaps its a stage they need to go through!!

Hey Mr. Nobody. israel is f**cked. Just letting you know.

Palestine will be free within 9 years.

Mister noone sheet You justify the génocide of palestinians by the nazi state of Israël with american weapons. Dont speak too much.You are wrong.It is not religion it is colonialism one day day or another,Israhell will collapse because it is not a country but a colony imposed by America ans Europe to steal gas and oil in Arabica countries

“None of you” … you’re a brain-dead cock

Saying Saudi will change to western civilization is equal to making a amazon tribal lady wear a lululemon legging.

At best saudis will look like african americans with lost identity. LOL.