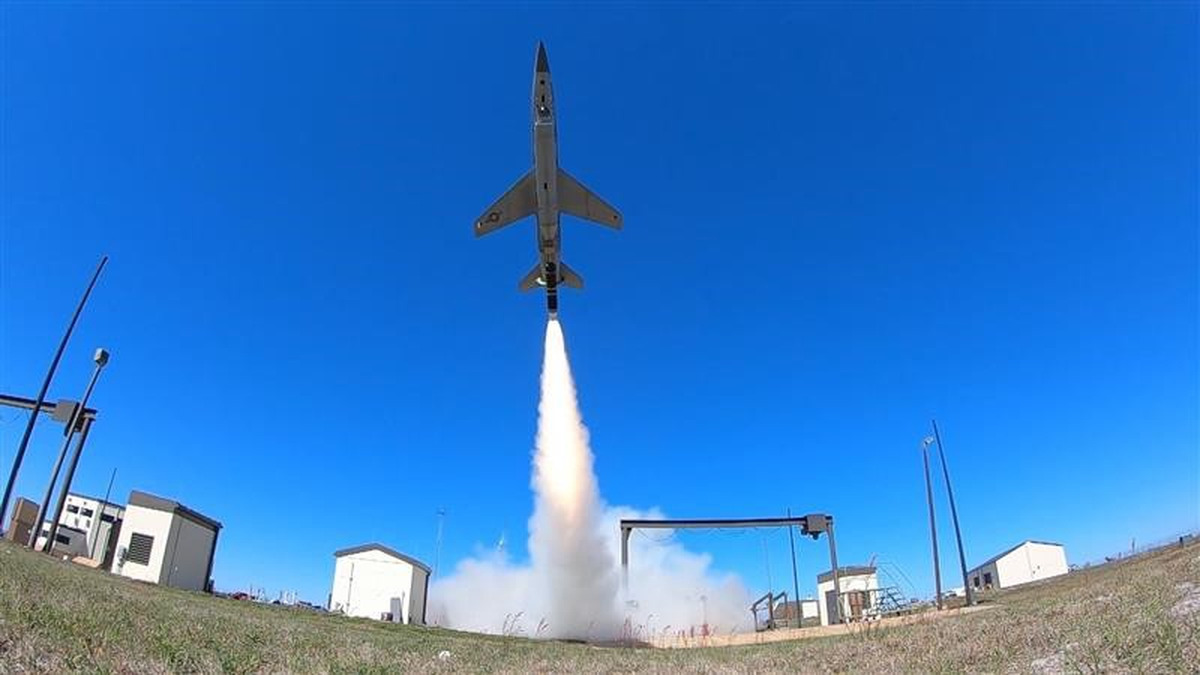 The US Air Force used its artificial intelligence system to control an autonomous drone for the first time ever in April.

This was announced on May 5th.

The Skyborg autonomy core system, or ACS, was loaded into a Kratos UTAP-22 “Mako” drone for a 130-minute flight test at Tyndall Air Force Base, Florida, on April 29, according to a service news release.

The Skyborg ACS conducted a basic flight and “responded to navigational commands while reacting to geo-fences, adhering to aircraft flight envelopes and demonstrating coordinated maneuvering,” the release stated.

“We’re extremely excited for the successful flight of an early version of the ‘brain’ of the Skyborg system,” Brig. Gen. Dale White, who oversees Skyborg as the program executive officer for fighters and advanced aircraft, said in the release.

“It is the first step in a marathon of progressive growth for Skyborg technology. These initial flights kick off the experimentation campaign that will continue to mature the ACS and build trust in the system.”

Skyborg is one of three initiatives under the service’s Vanguard Program for rapid prototyping and development of new technologies it can leverage for multiple operations.

The Vanguard Program brings together the Air Force Research Lab and the Air Force Life Cycle Management Center to “quickly identify cutting-edge technology and transition directly into the hands of the warfighter,” according to the service.

As an end goal, the Air Force intends to field a family of Skyborg drones capable of operating alongside tactical aircraft like the F-35 and F-15EX and taking on missions too risky for human pilots.

Steve Fendley, president of Kratos’ unmanned systems division, said the event illustrated the potential for attritable drones — the term given to unmanned aircraft that can be lost in combat, because they are cheap.

Kratos is one of three aircraft manufacturers chosen by the Air Force to deliver Skyborg prototype drones that will be configured with the ACS for tests in 2021.

The company received a $37.7 million contract in December 2020. The service also awarded contracts to Boeing and General Atomics worth $25.7 million and $14.3 million, respectively.

The April test was “was the first time an active autonomy capability was demonstrated on an Air Force test range, and is a first step to integrating these aircraft into a complex operational environment,” the service stated.

Further experiments are expected to occur over the next several months, with the end goal of demonstrating the operation of multiple Skyborg drones teamed with fighter aircraft flown by human pilots.

Kratos Defense CEO and President Eric DeMarco told Military.com in 2019 that the Mako drone will play a large role in the demonstrations.

“Mako continues to fly for various customers with all types of payloads,” DeMarco said in an interview. Kratos Unmanned Aerial Systems makes both the Valkyrie and Mako.

“It was designed to carry a 350-pound internal and/or 500-pound external payload, as well as 100-pound payloads on each wing,” he said. “That includes electronic warfare or jamming equipment, infrared search and track sensors; and offensive and defensive weapons.

“Mako [is] a test bed, running a parallel path with the Valkyrie, so when the Valkyrie is ready, those payloads can more easily be ported over and integrated into Valkyrie because they’ve already been demonstrated in an unmanned platform,” DeMarco said.

U.S. is still behind the curve…