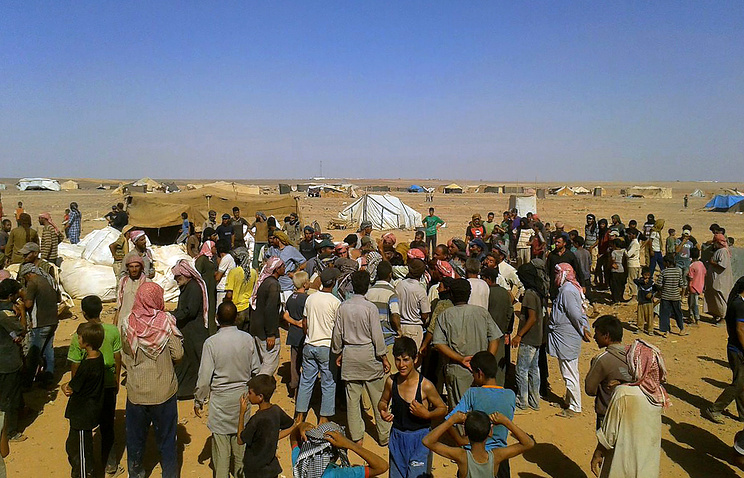 The U.S.-backed Revolutionary Commando Army (MaT) are stealing the UN aid to the refugees in the al-Rukban Camp, Mzahem Alsaloum, the former spokesman for the defunct U.S.-backed New Syrian Army (SNA), revealed on April 24.

In a series of tweets, Alsaloum said MaT commanders plotted to steal a new batch of aid by establishing a committee loyal to them and presenting it to the UN as the “elderly” of the al-Rukban Camp.

The fake elderly committee submitted a list filled with fake names of refugees, demanding the UN to double the aid set to be sent to the camp.

Alsaloum confirmed that the MaT plot was uncovered by the Russian side, which temporary blocked the delivery of aid to the refugee camp. The coordination headquarters of Russia and Syria first revealed the plot in a statement released earlier this week.

“The humanitarian crisis of Rukban Camp has been exacerbated by the corrupted leaders of the U.S.-backed MaT,” the activist acknowledged in one of his tweet.

According to Alsaloum, MaT commander Uqbah al-Batah, who is also the head of the supplying department in the U.S.-occupied 55 km zone, is responsible for selling UN aid and selling it to ISIS cells in the nearby Homs desert.

Alsaloum also accused the commander of smuggling two thirds of the aid sent to the 55 km zone to ISIS as well as of being involved in the sale of U.S.-supplied weapons and drugs to the terrorist group and Iranian forces.

Al-Batah was reportedly a commander in ISIS. Prior to that, he worked with an al-Qaeda-affiliated faction. The U.S.-led coalition expelled the commander a few years ago after discovering that he previously planned an attack on American troops and was involved in war crimes. However, the coalition appointed a new command for al-Tanaf, which allowed al-Batah to return.

The information revealed by Alsaloum, who worked with U.S.-led coalition forces in al-Tanf, are not a surprise. Russia and Damascus have been warning from U.S.-backed militants in the region for years now.

As for now, the al-Rukban Camp, which hosts around 40,000 civilians, remain under the control of these militants who are protected and supported by the U.S. military.

Nobody needed USA confirmation. Maybe that is for its fool people.

The US didn’t confirm it , one of their former peace loving terrorists did who has changed sides joining the SAA.

Look at the rest of Syria,Iraq, Yemen, Iran and for that matter Turkey.

None there hardly know what they are fighting for or against. So many are forced recruits and so many are paid.

When I read here hardly none of You deserve a country and Balfour 2 as well as Lausanne was a big mistake. You even insist in neocolonialistic borders and You are not even able to ask people, what they want and wish for, because You all already has decided their wishes.

People not even learn to ask qustions and think but to shut up. Much as they also only can make peace among friends and has none.

To me its more Halloween then Ramadan … with no candy.

The UN SC will just say we hope all parties can come to a respectful solution and all will carry on as normal. Apart from the US / UK / France speaking against China / Russia and vice versa all the others on the SC speak in diplomatic double talk so as not to upset anyone. I think it was the Cote d’Ivoire representative that almost chided the US last time they were discussing this camp. Even the Red Cross didn’t want to cross the line although they were hinting US needed to do more.

UN cannot not say much more then the members agree about.

Of course none from REd Cross wont be hostages as well.

When will the madness end

When the US has a civilwar to expunge the current elite in power from life.

Nothing is impossible, and the US has all the precursors of a new civilwar.

I don’t think so, people are just looking to live life not have a war

You think what the “people” want matters? The rulers are looking to acquire more treasure and territory for their families, same as always. If they can’t get it from foreigners then they’ll take it from their own people.

No realisme from You.

I see it as USA do protect the ones being no jihadists. Its more like most of those 40.000 are hostages.

Not a single of them for good reasons will join or include in Assads and Jordan denies to take any. They already have.

According to the article things are more infected, then I espected.

Don’t worry too much about the rest of the refugees in Al Rukban, the genuine refugees have already left for safe haven in Assad’s territory, what’s mostly left now are the Isis fighters and their families, they’re the bulk of what’s left at Rukban. Russia and Syria made a deal with the US last year which allowed most if not all the genuine refugees to leave, they were being held hostage before that though, now as I said most of what’s left at Rukban are the ex Isis fighters and their families, and they should all be shipped to the US for relocation if there’s any justice, and hopefully they end up living in Obama’s neighbourhood, or better still right next door to him, and that would be Karma.

I follow everything Jens, everything, and I can tell you that before 2018 there were only about 7 or 8,000 refugees living in Rukban, after the Russians and SAA and Iraqis cleaned out Isis from Deir ez Zor and Homs dec 2017, that refugee camp went from having 7 to 8,000 [I’m not quite sure] refugees to having 45,000 refugees, a few months later it was about 70,000. Was it just a coincidence the refugee camp swelled in numbers just after Isis was virtually eliminated, no it wasn’t, the US gave the ex Isis fighters and their families refuge and let them prey on the genuine refugees that were living there, which may have been as many as 15 to possibly 20,000 by the end of 2018. But as I said the Russians negotiated a deal with the US sometime mid last year and allowed Assad to ship out many of the refugees, the only ones that remained in the camp were the ones that have something to hide or have done something they may be punished for. Now they just sell each others wives and daughters as sex slaves and extort food and medicine from the weaker members of Isis, so Assad’s already saved all the people who need saving in Rukban, Isis fighters and their families don’t need saving, they just need new homes, and as I said they should all go to America, the land of the free and the brave, LOL.

And Allah is from Alabama too.

No he lives in Denmark now, and he loves the Danes because of their free and easy lifestyle, especially the pretty blonde girls uninhibited sexuality, and he forgives your useless soldiers for letting all his Islamic followers be slaughtered by the Serbian monsters, after they easily scared the useless Danish soldiers away.