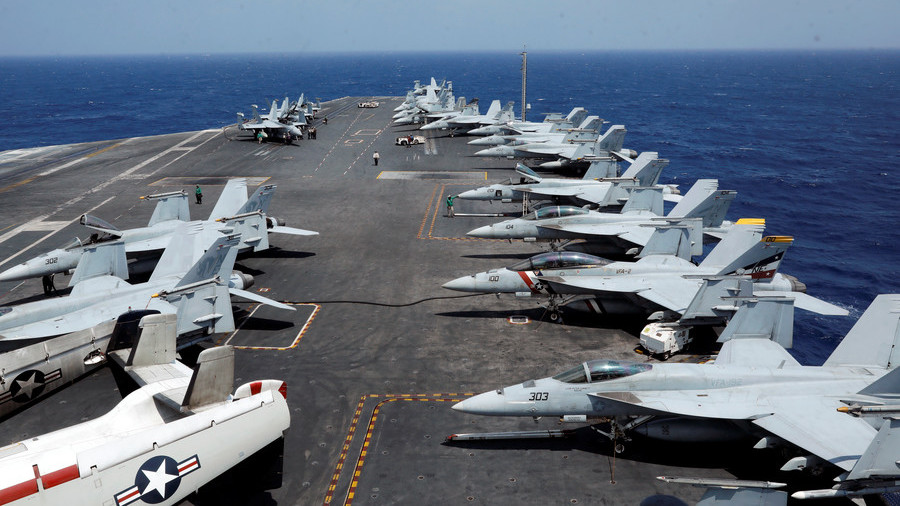 Notably, President Trump’s wish for legacy – the world’s first space force will not happen in 2019, the NDAA does not contain a single mention of the Space Force. Futurism reported, however, that the omission from the 2019 bill might be due to timing, rather than Congress’ opinion on the matter. Donald Trump only ordered the establishment of a space force branch in June, weeks after the administration submitted most of its other proposals, according to an undisclosed White House official.

Another noteworthy point of the NDAA is the $40 million in funding for Artificial Intelligence (AI) research by the Department of Defense (DoD). From the amount, the Air Force will receive $20 million, the Army and Navy will each get $5 million each, while the yet to be formed AI Commission will receive the leftover 10$ million.

The NDAA is a major move towards the DoD emphasizing on military uses of AI, in a call for DoD-specific workers, labs, test facilities for various military applications.

As for general information on NDAA: The bill complies with the bipartisan budget agreement and authorizes $639.1 billion in base funding. $69 billion are additionally authorized in the Overseas Contingency Operations (OCO) fund. Past that, there is a $8.9 billion for mandatory defense spending, a total of almost $717 billion is allocated for spending.

Other significant provisions of the new legislation include:

To care for troops and their families the size of the Army, Navy, Air Force, Naval and Air Reserve, and Air Guard, fully funds a 2.6% pay raise for our troops, and extends a special pay and bonuses for servicemembers in high-demand fields.

The bill aims at restoring readiness by providing:

Increased training – Increased funding for training for each Service. Funding for flying hours has been increased by $24.2 million, funding for other training operations has a total of almost $83 million, above the increase suggested in the President’s Budget Proposal. A further $58.9 million are to be used for the improvement and modernization of major combat range and test facility bases.

Aviation Readiness – The legislation fully supports the President’s budget request of $2.8 billion for the procurement of spare airplane parts and authorizes an additional $100 million for spare parts for the F-35 Joint Strike Fighter. The bill further includes an increase of $65 million for the A-10 wing replacement program.

Regarding readiness at sea the NDAA, in regard to recent fatal maritime accidents, directs the Navy to provide clear chains of command for operations, building readiness and shipyard maintenance. The bill supports the accelerated construction of the fourth Ford-class aircraft carrier, construction of two additional Littoral Combat ships, and supports two additional Virginia-class attack submarines in fiscal years 2022 and 2023. The bill also authorizes $3.2 billion to pay for development and design work of the Columbia-class submarine.

Building a modern force – in support of the President’s request to purchase new equipment to replace hardware, which is too broken or expensive to repair, or is too old. This includes the authorization of $360 million for Stryker A1 combat vehicles.

Adding $150 million to accelerate U.S. efforts to field a conventional prompt strike capability before FY22, in response to the critical advances Russia and China have made in developing their prompt strike hypersonic weapons.

There is a $470.9 million increase in funding for facility sustainment, an additional $340.5 million is allocated for depot maintenance. $11.3 billion have been authorized for military construction.

Legislation also includes a variety of steps to combat Russian aggression towards the US and its allies. These include funding for research and development to counter weapons developed by Russia. Levying new sanctions on Russia’s arms industry. Prohibits military-to-military cooperation with Russia, as well as prohibits US government recognition of the absorption of Crimea. It also fulfills the President’s request for $6.3 billion for the European Deterrence Initiative to further increase number of U.S. troops in Europe, reassure U.S. partners and allies, and deter Russian aggression.

In regard to China the legislation contains an entire government strategy to confront the country. It supports military exercises with Japan, Australia and India and improves security cooperation to counter China’s rising influence in Asia, Southeast Asia, and other regions. There is also support for improving Taiwan’s defenses.

The bill ensures that US forces are ready for a potential conflict on the Korean Peninsula as North Korea continues its dangerous and destabilizing development of nuclear weapons and ballistic missiles.

As reported by USNI, the Pentagon will still need another bill to pass to fully implement NDAA’s authorizations. A separate spending bill still needs to pass, Rep. Mac Thornberry mentioned in his statement after the approval of the NDAA on July 26th. His words were: “Much of the advantage that these measures give our military will be lost, however, if Congress fails to follow the NDAA with an appropriations bill that is both adequate and on time. This is the earliest the House has acted on an NDAA in many years. There is no reason that Congress should not be able to take up and pass the defense spending bill before the end of the fiscal year so that Congress can keep faith with our troops and fully fund the military when we return in September.”

Trumps space force – who exactly are the enemy the Klingons!

as
Reply to  Tommy Jensen

Anything classified now from the US would be in the form of regime change subversion programs, terrorism, bioterrorism, illicit deals, etc Anything they could brag for they will brag them. There’s already a good article explained how expensive and pointless (at least as a military forces in the near future) this space forces is due to long range capability of their adversary.

Over $700B now so what happens when we do start the Space Corp? The seeds for our Soviet Union style collapse are being sown.

We are caught in the trap of simultaneously paying for the maintenance of the old stuff while developing the new stuff. Once we equip our forces with the new stuff, we have to pay for that maintenance while we develop the next round of new stuff because the stuff we just deployed is now obsolete.

I know, no one will shed a tear over this and they shouldn’t. It just kills me that we have an army of consultants assuring us that this isn’t a problem with their talking points … 1. We spent a higher amount of our GDP during the 50’s. – okay but our GDP growth rate averaged 5%, not 2%.

2. Social Security and Medicare are the real culprits. – They have not contributed a dime to the deficit yet. If we eliminated those programs, our payroll taxes would go to zero and we would still have the same budget deficits that we have today.

For one quarter, I said average. In the 50’s we had quarters where the growth rate was north of 15% … https://tradingeconomics.com/united-states/gdp-growth We haven’t had one of those since about 1978.

as
Reply to  chris chuba

Even worse and complex than that. For one thing F35 are originally made with affordability and ease of use in mind to replace most of their old diverse inventory (that’s racist hey !). So how do we really make something to be a cutting edge advanced than peer adversary that come off cheaper than what they currently fielding ? Is that realistic ? Unreasonable even.

Even worse for their cheerleaders that they don’t realizes that Russian are succeeding in this same endeavor with the Su27 airframes.

At least there is not much of an old space program to have to maintain…and they misplaced the technology anyway.

…..and this little thingy.

Russians are smarter than dumb ‘muricans. 28% of Russians surveyed believe that the manned landings were faked. Brits are at 25%.

“Please believe our made up conspiracy theory or else you will be left with all the evidence that the moon landing was fake.”

lol! Despicable, but funny for those of us with gallows humor. Thank goodness for Buzz though. He can always be counted on for a giggle.

It was announced very late, there was no way it would be included in this budget