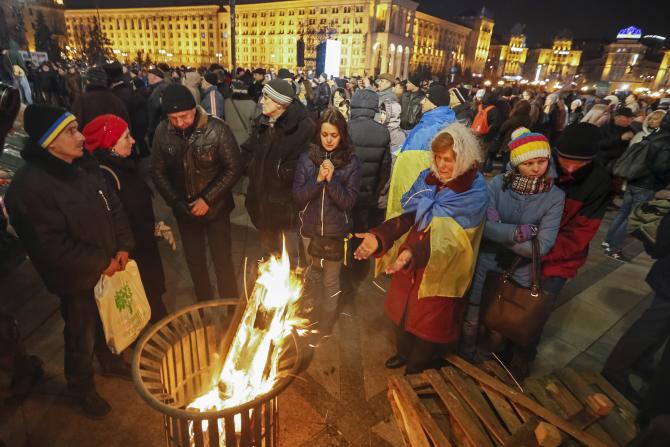 Two years ago, on February 22, 2014, Ukrainian President Viktor Yanukovych was removed from power by a combination of foreign and street pressure. A day earlier, he signed the “Agreement on the settlement of the crisis in Ukraine”, which was guaranteed by the signatures of the foreign ministers of Germany and Poland, Frank-Walter Steinmeier and Radoslaw Sikorski and French diplomat Eric Fournier as a representative of the Quai d’Orsay. The document was also signed by the then leader of the Maidan opposition, Vitali Klitschko, Arseniy Yatsenyuk and Oleg Tyagnibok. However, the agreement did not last 24 hours. Ignoring the agreement, the Supreme Rada announced President Yanukovych as “self removed from power” and appointed temporarily to the post Alexander Turchinov. The street stormed the institutions, and Yanukovych was evacuated by Russian spetsnaz services to Russia and Western guarantors of the “Agreement on the settlement of the crisis in Ukraine” supported the new government, forgetting their own signatures.

Two years later the Euromaidan is already a memory. The institutions continue to operate under siege. On the agenda is the so called third Maidan, this time organized by uniformed nationalists, who played the role of storm troopers in the first specious Euromaidan. It is good to remind ourselves that in November 2013 what became the reason for the Euromaidan, was the decision of the Prime Minister Azarov and President Yanukovych to discontinue negotiations with Brussels for the signing of an association agreement of Ukraine with the EU.

After the change of power one of the first acts of the new government Arseniy Yatsenyuk was to sign the agreement in question. The government announced as a priority the European integration of Ukraine. President Petro Poroshenko continued the strategy aimed at “reaching the highest European standards of living.” It plans that to 2020 Kiev will submit an application to be accepted in the EU. Alas, the country is steadily moving away from Europe in economic development and institutional stability. For two years the national currency devalued three times. Then, 9 hrivna were exchanged for one dollar. Today more than 26 hrivna are exchanged for one dollar. In 2014, Ukraine set a record in inflation for the whole transition period – 25%. But last year, it managed to beat that with a whole 43%. Gross domestic product fell by 6.7 percent in the first year and it fell by another 10% in 2015

So far Kiev has avoided it’s inability to pay thanks to foreign aid, mainly from the IMF. For the past two years in the country were poured 20 billion dollars. Most of them, however, are wasted or go to military spending, prompting the IMF and European institutions to become more suspicious of Kiev.

“We lost a quarter of our industry, and that’s without counting the loss of Crimea and Donbas”, reminds the leader of the “opposition bloc” Yuri Boyko. The promised reforms from the cabinet of Yatsenyuk remain on paper. IMF chief Christine Lagarde has warned Kiev that without accelerating reforms they can not rely on a new tranche from the fund. Ukraine, however, is expecting a bail out of $ 1.7 billion, with which it can secure the macroeconomic balance of the budget.

“Ukraine does not deserve what happened to her. The IMF holds the country that it ostensibly seeks to save, in a suffocating embrace,” said former Prime Minister Nikolai Azarov. ” In this endeavor the IMF is supported by the European Bank for Reconstruction and Development, European Investment Bank and the World Bank. This vicious cycle makes Kiev to constantly beg, instead of thinking about development. Ukraine is assigned a role: to create tension with Russia. That they allowed the country to the European market means nothing: it can not fight for it”, concluded Azarov.

Meanwhile, the governing coalition crumbles from mutual accusations of corruption between the partners. Ukrainian courts are already hostage not only to corruption but also to the street pressure of paramilitary right-wing formations, which pressure the judges. Undisclosed remain two of the key tragedies in the Ukrainian Saga: the carnage on the Maidan and the burning of pro-Russian demonstrators at the Union House in Odessa.

The breakdown of the ruling coalition in Ukraine bodes new early elections, and they can only strengthen the political instability and economic deadlock, as the coalition is hostage to anarchy. This makes most experts predicting a new Maidan, where European illusions will probably be supplanted by the desire for revenge by the aggrieved.

here is your blame, blame these pretenders, who took kiev in a coup,

Are you implying/stating that the above captioned individuals deliberately caused/continued corruption and stymied progress because they are Jewish by ethnicity?

I respectfully request your clarification and explanation.