Two years after the last Israeli military offensive in Gaza, its inhabitants denounce that the strip hasn’t been rebuilt, Israel hasn’t halted the blockade and its situation keeps worsening. 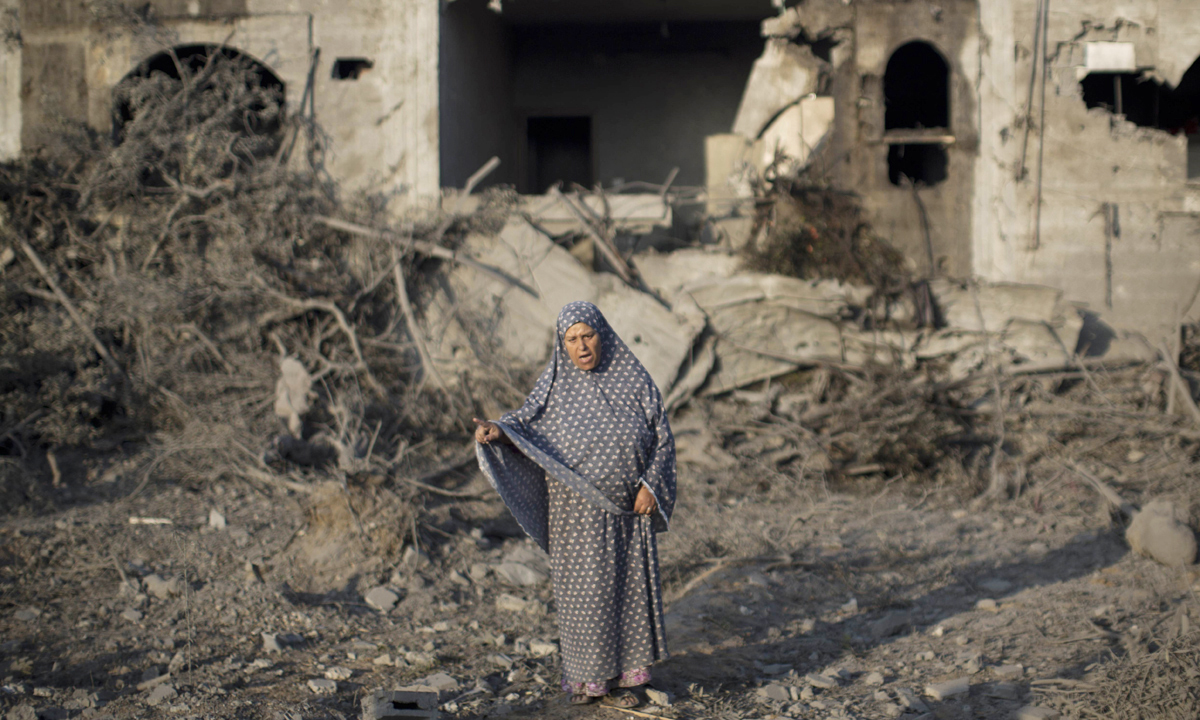 A Palestinian woman gestures as she stands amidst destruction following an Israeli military strike in Gaza City on July 08, 2014 . AFP PHOTO / MAHMUD HAMS

Published in palestinalibre.org, translated by Lisbeth Mechter exclusively for SouthFront

“I hate to remember the 50 days and nights of the offensive.  I’m still sad. Our house hasn’t been rebuilt after two years. The blockade continues, poverty and unemployment are still too high”, Suha Al Masri, a 42-yearold Gaza woman complained.

Her family lost her house after the impact of three projectiles that also killed her nephew and other three relatives.

Many in the Strip feel that their situation has slightly improved in this period, despite international promises and reconstruction plans that are not concrete yet.

Tanks, artillery and bombings left a huge destruction in the infrastructure, housing, industry and agriculture in the territory governed by the Islamist movement Hamas that took the power in 2007.

According to different NGOs, in those “endless” fifty days the bombings lasted, 31 974 were totally or partially destroyed.

UN estimates on 60 612 the number of citizens of Gaza that at the end of the conflict (August 26th, 2014) had fled from their houses to find shelter in schools, hospitals, mosques and churches.

After two years, many live in rented places or with relatives, as their houses are still in ruins.

They blame the blockade for obstructing the free entrance of building material after Israel considers it of “double use” and it’s afraid that material is used to dig tunnels that penetrate their territory to then perpetrate attacks.

The cease-fire achieved with Egyptian mediation between Israel and Hamas, the Islamic Jihad and the OLP (Organization for the Liberation of Palestine) is still running with certain violations from both sides.

The agreement compelled Israel to halt the blockade to permit the reconstruction plan to be carried out, besides the construction of an airport and a port; but none of the cited has been carried out, the inhabitants of the Strip denounce.

Maher Tabaa, director of the Commerce Chamber of Gaza, assures that the losses provoked by the conflict ascend to 3 600 million dollars. 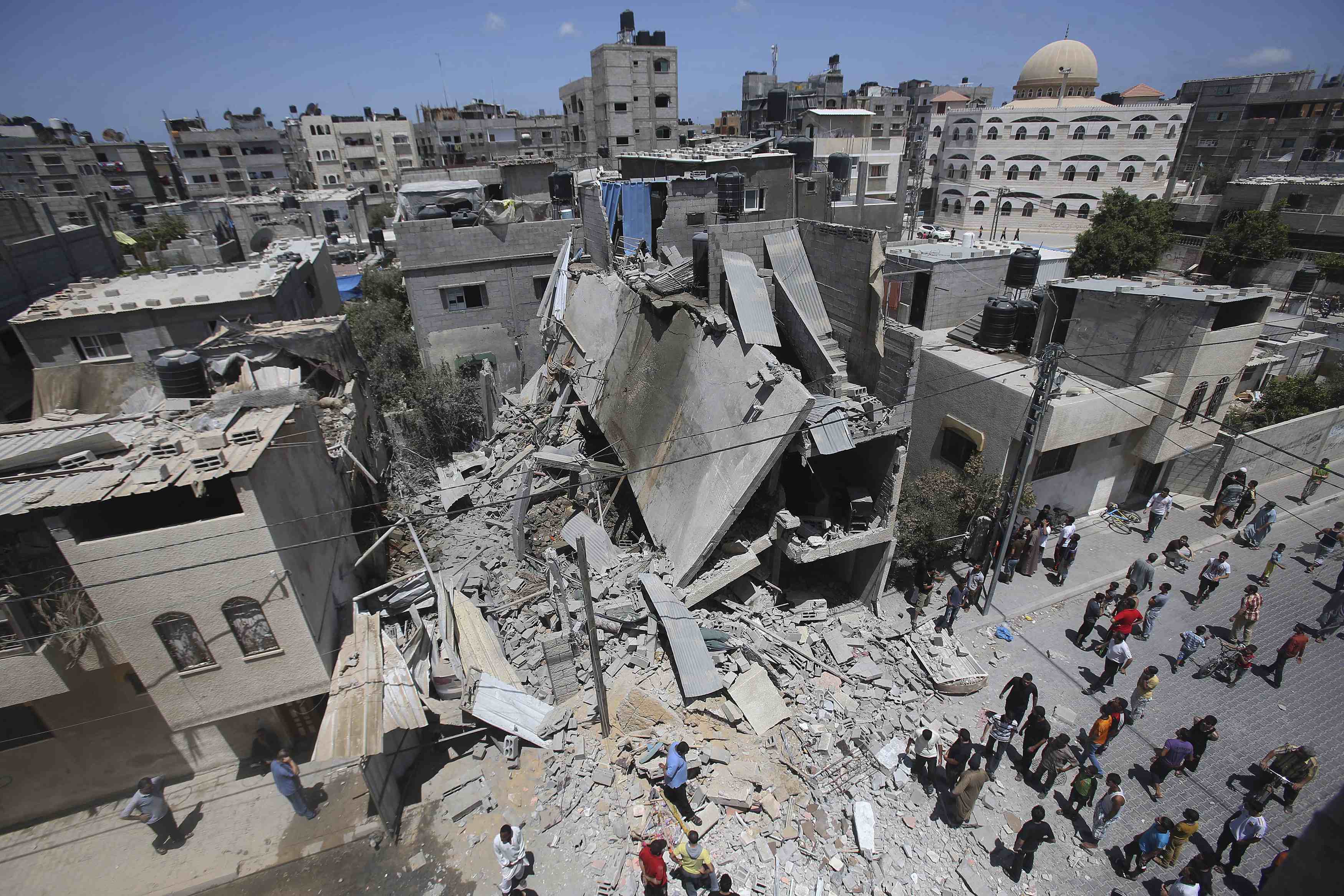 Palestinians in Rafah, Gaza Strip, gather around the remains of a house that police said was destroyed in an Israeli airstrike. Israel said it shot down a drone from Gaza July 14, the first reported deployment of an unmanned aircraft by Palestinian militants whose rocket attacks have been regularly intercepted. (CNS photo/Ibraheem Abu Mustafa) (July 14, 2014) See GAZA-TARAZI July 14, 2014.

Two and a half months after the conflict an international donators conference was held in Cairo, where different countries promised to donate 5 400 million dollars for the reconstruction that has barely started.

AIDA (Association of International Development Agencies) urged Israel to lift the blockade and put an end to the restrictions that impede the reconstruction. Also, they published a petition to international leaders like Barack Obama in the US, François Hollande in France and the German Chancellor Angela Merkel to accelerate the process.

In the petition they ask the international leaders “to compel Israel to take wood, iron, cement and other essential materials for the construction away from the list of products with restricted entrance to the Strip”.

According to AIDA, only 10% of the 11 000 totally destroyed housing infrastructure has been rebuilt.

Besides that, there’s fear of a new offensive in the Strip, especially after the declarations of the Israeli Ministry of Defense, Avigdor Lieberman, who claimed that Israel will attack if the Palestinian militants continue to dig tunnels and throw rockets.

“We are very concerned after sooner or later there could be a new Israeli offensive, especially due to the threats from Israel and the fact that Palestinian armed groups have claimed they are ready to fight”, Mohamed Abu Daqqa, 26-yearold teacher sadly affirms.

In addition to the siege against Gaza (constituting the collective punishment of an entire population through economic strangulation, with similar structured bloc operations being implemented against the Russian Federation but having less effect), it is important to recognise Israeli preparations for another direct war against Hezbollah/Lebanon, the implications of the increasing number of Israeli air strikes against Syria (and Iranian/Hezbollah forces and command posts) that are contributing to an escalation towards a broader conflict and expanding Israeli operations (in collaboration with allied bloc operations) against the Russian Federation (RF).

In this context, it is significant that Iran is asking for the RF to enforce Syrian sovereignty (particularly preventing Syrian air space violations/ongoing Israeli strikes).

Russian inaction in enforcing Syrian airspace sovereignty may be motivated by a desire to maintain workable relations with Israel however it is counter-productive, indeed dangerous. As Israel continues to launch strikes against Syrian, Iranian and Hezbollah forces (often to assist and in coordination with militant/terrorist operations) it is logical that it is only a matter of time until a broader conflict results between these parties.

It is worth assessing whether it is prudent for the RF to clarify that violations of Syrian sovereignty will not be permitted. After all, Israel is a partner of the U.S./NATO bloc, is involved in allied bloc operations against the RF and despite any (disingenuous) claims to the contrary, its actions are that of an adversary of the RF.

In addition to (indirect but active) involvement in economic warfare operations [3][4] against Russia and allied proxy warfare operations [1][2] (in Chechnya, Georgia, Ukraine, Syria, etc.,), Israel (in collaboration with U.S./NATO operations) is also involved in regime change operations within the RF (efforts to install aligned political assets to exploit Russia and its resources/assets as a client state). It is actively involved in allied operations to sabotage Russian energy supplies (and is involved in allied pipeline projects that seek to replace Russian pipeline distribution routes). The U.S./NATO/Israel bloc is also engaged in destabilisation operations (efforts to engineer civil protests/unrest involving the application of colour revolution technology) and partition operations (through the support of separatist/militant groups, some of which are conducting terrorist operations). Israel is also developing technology (in collaboration with its allies) to overcome Russian defensive missile systems, a priority of this bloc.

In the event of direct military conflict between military blocs, Israel will be integrated into the military operations of the U.S./NATO bloc (as it currently is). Russian analysts no doubt recognise this. Inadequate deterrence only emboldens adversaries.

References. 1. “For past seven years, Israeli companies have been helping [the] Georgian army to prepare for war against Russia through arms deals, training of infantry units and security advice.” (War in Georgia: The Israeli connection, Ynet News [Israel], 10/08/2008)