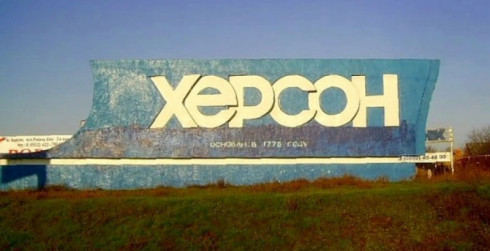 welcome sign at the entrance to the city of Kherson

On December 6, a shootout took place in the city of Kherson which has recently come under control of the Kiev regime. According to local reports, servicemen of the Armed Forces of Ukraine (AFU) clashed with the forces of the Security Service of Ukraine (SBU).

The incident took place at about four o’clock in the afternoon. It turned out that servicemen of the 28th Brigade of the AFU were stopped by the security forces when they were looting abandoned apartments in houses. Ukrainian servicemen did not lay their arms and opened fire in an attempt to resist the SBU forces.

As a result of the shootout, two servicemen of the AFU were reportedly killed. Data on the wounded was not revealed.

This is not the first time that the military from the AFU are engaged in looting. Ukrainian servicemen were busy looting civilians in the Donbass region since the very beginning of the military operations of the Kiev regime against the population of the Donetsk and Luhansk regions.

Looting of Ukrainian servicemen was common in all war-torn regions. After the Russian military withdrew forces from the right bank of the Dnieper River in the Kherson region, Ukrainian military and security forces divided their “zones of influence” in the city of Kherson, which means that the AFU control some of the city districts and the SBU governs in other ones. As a result, when Ukrainian servicemen, who are usual to rob civilian houses, come to the quarters under the control of the SBU for looting, clashes between the militants break out.

Such incidents in the areas which are under control of the Kiev regime are another evidence of the  criminal structure of the Ukrainian Armed Forces and the deplorable state of morale of Ukrainian militants.

Its a Bloods and Cripps thing,thats what Ukraine has been reduced to.

Nothing new here, subhuman savages killing each other.

Amiscum military doctrine. Do you remember the looting of the central bank of Iraq?

Nigger the Faggot
Reply to  Carlo

Last edited 1 month ago by Nigger the Faggot
6
Reply

Yes, ALL the loot belongs to the SBU :)

Armed Forces of Ukraine (AFU) versus Security Service of Ukraine (SBU). Perfect. Nazis against nazis. I hope Nazis lose. Both of them. Cope.

It’s likely that the two looters would have been shot had the Ukrainian Security forces arrested them so they shot it out and lost! Ukrainian nationalist units had and have a reputation for similar looting and robbery at business premises and private homes of Civilians in the Donbass since 2014 thus is common knowledge even in the West…..

These people don’t deserve to win at anything, they deserve to serve as a massive embarrassment to NATO.