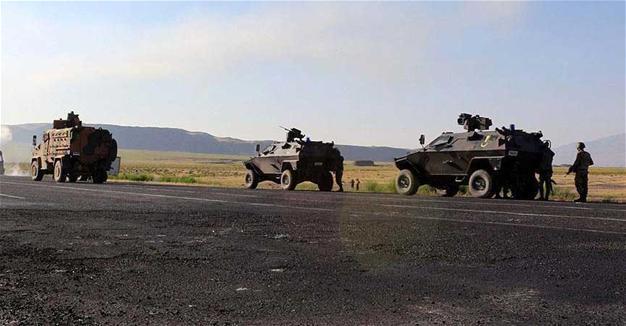 On December 25, the Kurdistan Workers Party (PKK) killed two soldiers killed and wounded another one in the southeastern Turkish province of Hakkari, the Turkish military said.

On December 24, a soldier was killed and two others were wounded in northern Iraq when a grenade detonated by accident. The wounded soldiers were not in critical condition.

Earlier reports appeared that the PKK declared an autonomous region in the Qandil Mountains in northern Iraq. These mountains are located in the border area with Turkey. Experts believe that the PKK declaration will likely lead to further escalation of tensions between Turkish security forces and the PKK.

Ankara sees the PKK a terroirst group that poses a direct threat to the Turkish national security because the PKK sees to establish a Kurdish state that would include a part of Turkey.

It is time for all Monotheist to unite! Not under one banner, but as allies!

Monotheism are universalism that work with globalists. Rely on nationalism.

Arabs must understand that kurds exist and want a country and that they will live better without them.

Nationalism is for idiots

A recipe for war, check history

What history ? WW2 was staged by the west. I don’t buy conspiracies.

You rather buy fairytales…

PKK has a very good advantage over Turkey. The purge in Turkey after the failed CIA coup weakened the Army. It will take at least 5-10 years to compensate for the losses. Meanwhile, the US-Israel can really cut a good chunk of Turkey and deliver it to the kurds. And that will keep the game of controlling the middle east afloat. The only long term play I see there.

Of course easier said than done, Russia and Iran are watching out for Turkey. What is odd, is that Turkey is not fully aware of the problem. But I hope I am mistaken.

Turkey did something very stupid : they attacked Assad for maximum disadvantage and minimum advantage. I still don’t understand why Erdogan did something so stupid.

That’s a very bad analysis. Imagine a part of your army being loyal not to state but to some external organisation(CIA). How is that gonna play out in the war? Your soldiers will start killing each other on the battlefield.

Army right now may have less commanders and officers but at least its in filled with traitors and agents.

I will give you 1 example of this; why do you think Euphrates Shield was launched right after the coup? :) During the coup most of the Gulenists exposed themselves and were excluded from the army. Thus, goverment was able to launch the Euphrates Shield operation because it could now trust the soldiers in the operation.

Another example would be the people(pro-Ataturk) that were imprisoned from the army by Gulenists judges. You can read their articles or watch their videos on youtube; all agree that army is not stronger for it is free of external influence and agents.