Two people have been killed and seven arrested during a major police operation targeting the alleged mastermind of last week’s terror attacks in Paris. 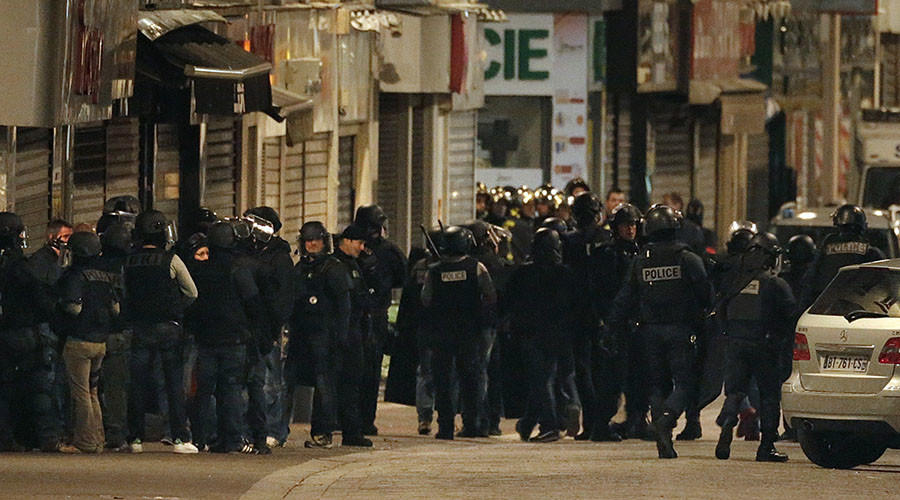 French special police forces secure the area as shots are exchanged in Saint-Denis, France, near Paris, November 18, 2015 during an operation to catch fugitives from Friday night’s deadly attacks in the French capital. REUTERS/Christian Hartmann – RTS7OG0

The French police and army swooped on a Paris suburb early Wednesday amid gunfire and explosions in the hunt for those behind the Friday’s attacks in which 129 people died. The French government spokesman, Stéphane le Foll, declared the raid, which involved several hundred heavily armed anti-terrorist police and Swat teams, officially over at about 11.30am, seven hours after it started.

There was no information about the fate of a third fugitive thought by police still to have been holed up in the apartment on the rue de Corbillon in St-Denis, a town just north of Paris.

The Paris prosecutor, François Molins, said earlier three men were arrested and led away from the flat at the start of the assault, at about 4.30am, while another man, reportedly the owner of the apartment, and a woman were also detained outside. Two other people who were in the apartment building but not the flat itself were also arrested. At least two extremists, including a female suicide bomber, have been killed. Seven people were arrested during the raid.

Residents of the suburb of Saint-Denis, north of Paris, were awakened by an exchange of gunfire at around 4:30 a.m. (0330 GMT) local time.

At least 15 people, including women and children, have been evacuated from the building in the area of anti-terrorist operation, the mayor office of Saint-Denis told Le Figaro.

According to police spokesman Jean-Alphonse Richard, officers identified an apartment being used as a base by the alleged terrorists in Saint-Denis in the hunt for a key suspect in last Friday’s murderous Paris attacks and his accomplices.

Its the same shit Russians and Europeans have been putting up with for far to long. Perhaps this is now the ripe time for liberation of the indigenous tribal peoples from Middle Eastern oppression.