On January 20, warplanes of the Turkish Air Force (TAF) conducted their first airstrikes against the Kurdish People’s Protection Units (YPG) in Afrin area in the northern Aleppo countryside, according to the Turkish Anadolu Agency.

Turkish Prime Minister Binali Yildirim confirmed that the TAF begin its aerial operations against the YPG in Afrin during a public speech in the Turkish city of Bilecik according to the Washington Post newspaper.

“As of this moment our brave Armed Forces have started the aerial offensive to eliminate the PYD and PKK and Daesh [ISIS] elements in Afrin,” said Yildirim

The airstrikes are the first stage of the long-awaited Turkish military operation against the YPG in the Afrin area. The Turkish Army will likely launch its ground operation and advance into Afrin in the upcoming hours.

Earlier, Turkey’s President Recep Tayyip Erdoğan said during a public speech in the central Anatolian province that the Turkish military operation against Kurdish forces in Afrin has “actively begun in the field”. LiveSyriaMap is run by a Kraut for Zionism – says that Assad bombs hospitals and that Al Qaeda are noble humanitarians.

Check militarymaps.info, but it is in Russian most of the time.

Now we have a really weird situation….
The US say that Afrin territory is not their business and they wont do nothing about it.
Probably the SDF-YPG in the rest of “yellow” territory is not very amused about that.
The US has now a difficult position ….
1. They can help the YPG and fight the Turk in Afrin . That would be a clear conflict between NATO members.
2. They can stand still and risk to loose their most important ally with boots on the ground in Syria.

If I would be Assad , I would take a popcorn-bowl and sit down watching the show.

The SAA has to still clear the NATO Jihadis out of Idlib and Ghouta.

Many of those NATO Jihadi groups are aiding the Turks attack ,10 more villages and towns were added to the North end of Abu al Duhur base giving the flank protection. Meanwhile back at the ranch Turkey bombs an airport used by the US, seems we are back at year one.

What airport used by the US , sounds too good to be true .

Menagh near Ifrin as it was used to supply weapons to the Kurds.

Gℴogle giving you $97 hourly to do easy tasks from the comfort of home .. Do work Some just few hours daily and stay greater time together with your circle of relatives … Any one can also have this work…last Friday I bought a latest Buickafter just earning $13582 this last five weeks .it’s really nicest-job however you could now not forgive yourself if you do not check out it.!bw02v:➽➽➽ http://GoogleNetJobsTrackerWorkFromHome/more/cash… ♥♥♥n♥♥q♥♥n♥♥♥s♥♥d♥♥♥z♥g♥a♥♥♥p♥♥g♥i♥♥♥x♥♥e♥♥k♥♥v♥♥s♥♥♥o♥♥n♥♥k♥r♥l♥♥♥l♥y♥♥e♥♥♥t:::::!ue451b:lhuh

(..If I would be Assad , I would take a popcorn-bowl and sit down watching the show..)

Indeed! Let the allies of evil, in this case, the U$, its SDF proxies and its Turkish allies blow each other up in Afrin!

Right, it is a great news!

The show will end very simply – Kurds will realize that US are abandoning them just as they did in Iraq. Than they will realize that what they do – Syrian land grabbing puts them in illegal position and here’s Turkey to show them that independent Kurdistan is not welcome. Than (may be) they realize that only hope is returning within Syrian legal space – than Kurds gain completely legitimate support from Syrian state and its allies (Russia and Iran).
It’s a bit too late now but there will be no legal reason for Erdogan to attack Afrin and SDF (their turn comes after Afrin) if they fully restore Assad’s government authority in Syrian lands that they illegally occupy now.
Erdogan personality is a risky bit here. He really will be hard to remove from Syria but I still think that that will be easier than removing US.

Remove the US from Syria? If I were Assad I would ask the Turks and the Iraqis to block the US logistical access to Syria via their countries. Such action though would probably force Turkey out of NATO. Why would the Turks agree to this Syrian request? Turkey would agree because Assad would promise Syrian cooperation against the SDF once the US withdrew. The Iraqis might also agree if pressed by Iran. Jordan would still supply the US at Al-Tanf but that position can wither on the vine. The US position in Syria both militarily and politically is now very weak.

Remove Turkey from Syria? Once Turkey has seized Afrin this area will be incorporated into a greater Turkey in order to “secure its borders”. Unless Russia is prepared to go to war with Turkey on Syria’s behalf there is no chance of ridding Syria of Erdogan and his henchmen. Turkey will sit on the Syrian land it already occupies and is about to occupy , control Syria’s water supply via the Euphrates and work to undermine Assad. The turks have already telegraphed that Afrin is only the start: after Afrin comes Manbij. Syria has a great deal to fear regarding Turkey’s ambitions.

Now lets imagine that Kurds (including SDF) really are giving up to Assad and become loyal to Syria? Now imagine if Iran, Syria and yes, Russia will give full support to Syrian Kurds that defend Syria from Turkey? This is no brainer – US can twist western public opinion in its favor and Turkey can not.
This doesn’t look like a strong Turkish position, does it?

Let me get this straight: Turkey attacks Syrian Kurds on Syrian land, Russia and Syria in return for Kurdish allegiance defend the Syrian Kurdish territory and somehow the US is able to turn this in to a public relations disaster for Syria?

Let me explain what I mean (sorry for my English): US can (not for long btw) attack a country illegally but west will stick their tongue in their own ass and there would not be any real outrage in western public opinion. But if Erdogan attacks Kurds that are loyal to Syrian government than I doubt that western public opinion will support it. I.e. pressure will be from all fronts (may be Israel will help a bit) on Turkey, so yes, I think it is easier to liberate Syria from Turkey than from US.

I am not sure western public opinion hinges on if the Kurds are seen as loyal or disloyal to the Syrian government – you are projecting your own beliefs and prejudices onto the situation. To be honest I have no idea how events will unfold in Afrin nor can I predict what public opinion will make of the Turkish assault on Afrin. Too many variables for me……

I made my predictions – above. Let’s just wait and see.

Who the hell cares about “public opinion”? not governments.

You should go home to fuck your mother.

I think that’s exactly what Assad (the Syrian Government) is doing. On the other hand, were the SAA not busy elsewhere, I doubt they’d just watch the Turks invading Syria – Turkey knows that and therefore they hit now, whilst Syria is still busy enough with other priorities. I wouldn’t be surprised though about some Turkish birds suddenly falling from the sky …

“I would take a popcorn-bowl..”

Enjoying the show so far…. looking forward to the next installment.

if i were assad, i took afrin 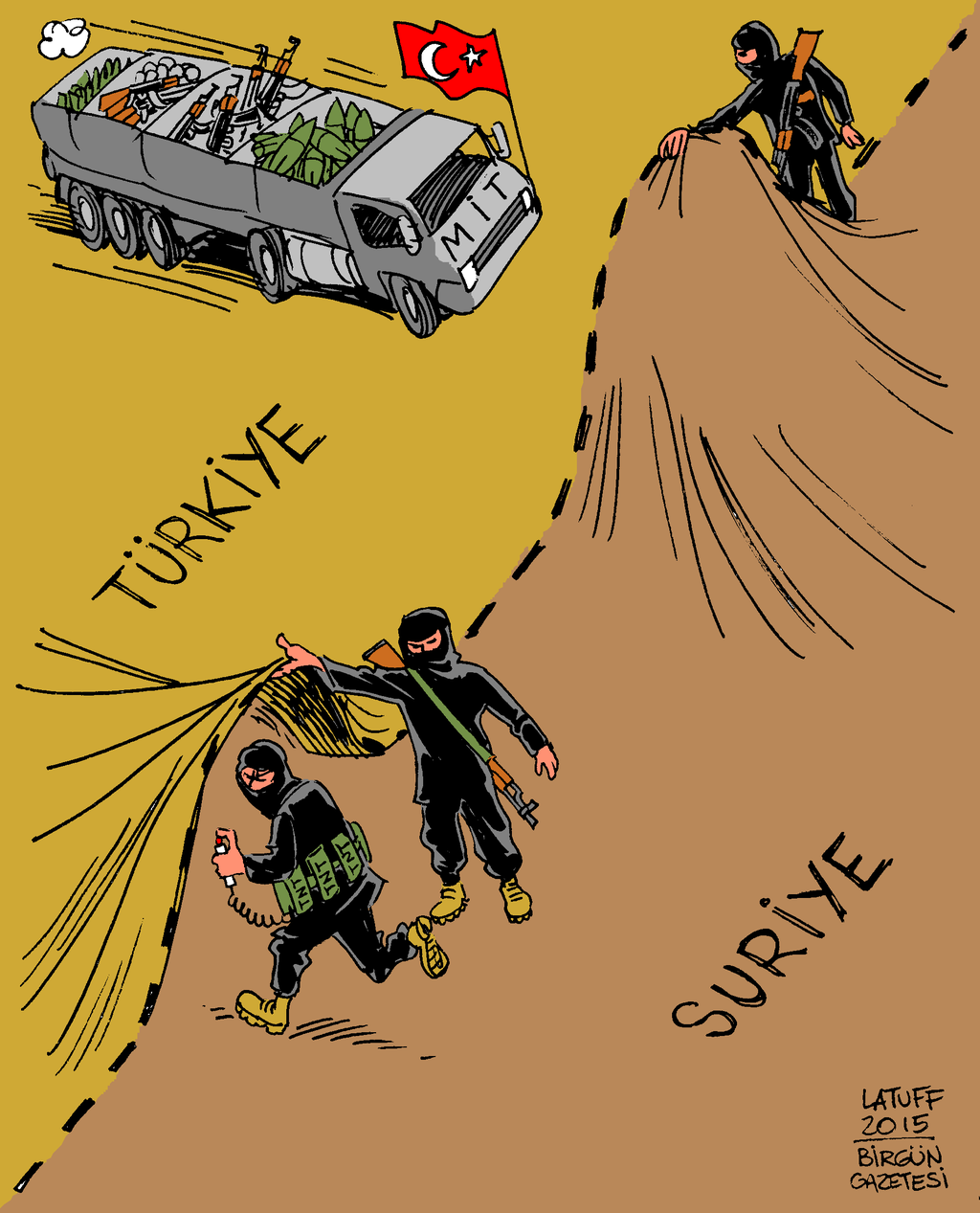 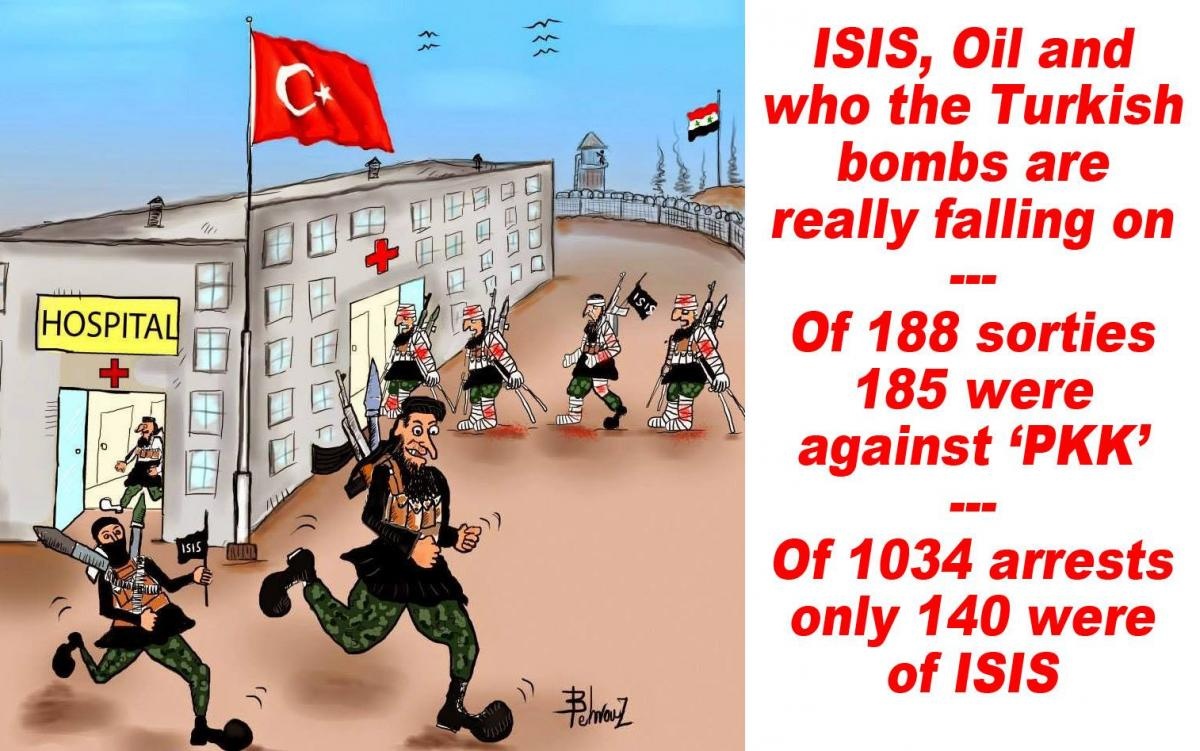 Clintons, Obamas and their cronies, certainly.

Solomon is joking about the “MIT” on the Turkish truck in the cartoon. Millî İstihbarat Teşkilatı [MIT] = Turkish government intelligence service.

Oh no, it’s been going on for a long time actually 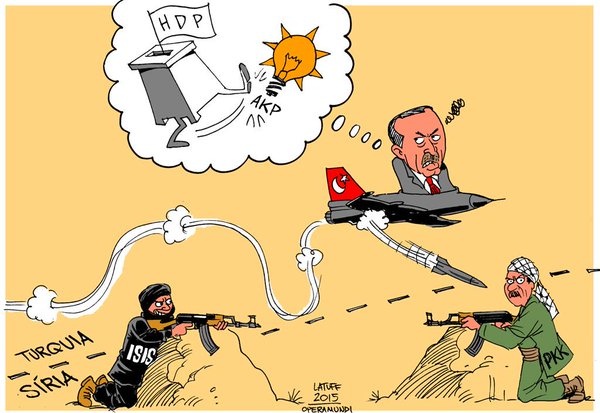 This is great news! The US would not be backing them unless they were terrorist.
US does not care if it is ISIS or YPG/YPJ that takes land away from Syria, they acheive the same goals for Zionism.
And now we have NATO vs NATO, this could not be better news!
In the end the UN will force Turkey to leave Syria. So as much damage they can inflict against the terrorist YPG/YPJ is a very good thing. Soften them up for the SAA to take over later.

If ISIS and YPG/SDF are both tools of the US why has the US used them for the last 3 years fighting each other? The SDF has done nothing else in this time except fight ISIS. Surely if there were a US strategy to use both these groups to take land away from Syria then the SDF would have been fighting the SAA not ISIS. In turn this would have freed up more of ISIS to fight the SAA So how does this conspiracy actually work? Why have two sharp knives and blunt them on each other?

Kurd’s are the US’s #1 favorite terrorist, they are senior to ISIS.
Only around 70%-80% of ISIS were doing what they were told. 20%-30% of ISIS were renegades.
Every time these ISIS renegades steped out of line, the Kurd’s were brought in the slaughter them like animals.
This is how they kept the bulk of ISIS fighting SAA and other Israeli enemies 80% of the time.

SDF is just a name for show.. it comprised of all the terrorists 90% And the rest are ungrateful and traitors Syrians . Yankedistan is the world’s terrorists country , have we forgotten..!

ISIS is for creating chaos and civil war in Syria. The longer ISIS survives, the better hopes of the zionists. The Kurdish terrorists are a fifth column in the Islamic world; complete traitors, terrorists, serve zionists openly, do what Washington and Hell Aviv tell them to do. A Kurdish “state” would usher in easier paths to the Greater Israhell Project. And the Kurds are all too happy to help out the jewish terrorists as jews murder Palestinians.

The terrorists in Washington and Hell Aviv have a border security fence in Israhell to steal land from the Palestinians, who the Kurds don’t care about, the Kurds serve their masters in Hell Aviv. When Washington announced a border security fence to steal land from Syria, Erdogan knew this would start the creation of a Kurdish state to create a massive war in Islam, stretching from Iran to Syria. Erdogan is acting fast before the Kurdish traitors have that security fence.

Ronald
Reply to  The Latin Mass

Your right , for once Erdogan’s moves make sense . “The creation of a Kurdish state is to create a massive war . Iraq , Iran , Syria and Turkey all are to loose territory to this “creation”
Erdogan needs the help of the other three nations .

Turkey unleashed part of it’s airpower, 72 aircraft, now add that to its artillery bombardment. I do believe that the Kurds nor any baddies have since war began faced such a massive pounding.
Of course no baddies have actually fought a true battle, Maybe Allepo and Raqqa, almost all have been relatively small numbers engaging small numbers firing wildly hoping to hit something, wonder about effectiveness.
But I think a wait and see is best before making an assumption into a fact.
Still 72 aircraft have, not to my knowledge been used at one time yet in this conflict.
We know not the full extent of weaponry US supplied the Kurds.
Be good tactic for US to flood Kurds with ground to air missels and anti armor ones as well, kinda like field test and no worry about American hero’s being harmed.
Interesting developments happening.

nshah
Reply to  Hide Behind

true.. behind the scenes.. they slept and f each others asses.. in the real world they call it The Grand Chess Game.. lol..!
Erdogan said it will be a fast war with those terrorists.. then they’ll go home once done, so that the 3 millions plus Syrian refugees can go back to their town..