Tensions between the United States and Russia are growing in northeastern Syria. On February 19, a video appeared online showing how an armored vehicle of the U.S. military was pushing a vehicle of the Russian Military Police off a road. The US move endangered a civilian standing near the road. If he had not run away in time, he would have been killed by the vehicle. The incident reportedly took place to the east of the city of al-Qamishli in the northern al-Hasakah countryside.

Russian air defense forces repelled a drone and missile attack on the Hmeimim airbase in the province of Latakia. Pro-government sources reported that the attack was carried out from the southern part of the Idlib de-escalation zone, where militants are still present.

On February 19, Turkish Sultan-in-Chief Recep Tayyip Erdogan declared that the Turkish military has finished preparations for an operation against the Syrian Army in Greater Idlib, and its start is inevitable because Syrian troops are not planning to withdraw from the recently liberated areas. On the same day, Turkey continued deployment of additional troops and equipment to the region, as well as directly to the frontline. The frontline areas where the Turkish military presence is especially strong is the eastern countryside of Idlib city and the town of Atarib. Turkish media outlets are enthusiastically drawing maps of a possible Turkish aggression.

Pro-Turkish sources claim that the operation in Idlib will not only help to rescue supposed civilians from the regime offensive, but to separate the so-called moderate opposition from terrorists. According to these claims, Hayat Tahrir al-Sham, the Turkistan Islamic Party and other al-Qaeda-linked groups, which make up over 80% of Idlib militants, will be disbanded. It would be interesting to see how Ankara would go about disbanding and disarming the forces that it has been supplying with weapons and supporting so much. Do Turkish media outlets really expect their audience to believe that from one moment to the next tens of thousands of battle-hardened al-Qaeda members are going to abandon their ideology and become florists or Instagram bloggers?

Oh Erdo Erdo you will lose a lot. Ottoman dreams only in Turkey, in Syria failed dreams.

I’ll take anything my own politicians say with a pinch of salt the size of a rock. The pinch of salt I need for anything that that child molester Erdogan (no insults to child molesters intended) says is at least as big as Mount Olympus. The one on Mars, not the puny one in Greece.

Most of opposition Turkish media likely to report terrorist relation between Turkey and Syrian terrorist have been sadly closed by Erdogan regime. Remember “Cumhuriyet” newspaper closed since 2016. Several journalists were sentenced to prison after last year trial. For instance, they revealed proof o weapon supply to ISIS an other terrorist groups from Turkey secret services.

Looks like Erdogan have never intention to comply with tha Astana agreement. Looks like Putin got fooled. The latest news from almasdarnews Erdogan request 2 Patriot missile from NATO to target Russia ans SYria Air Forces. Based on this information Russia Air Force and SAA should hit Turkey very hard now. Now is the time to cut the snick head. The Astana agreement is dead

same thing happen when turkey sending military hardware to idlib,SyAAF had chance until them on the way.now it is over and turkey supplied weapons are on al qaeda’s hand.

Hide Behind
Reply to  ypovalkanios_katimas

One should understand the differences between for export versions versus those used as part of sellers own versions. of electronic( digital controlled weaponry.
Why would Turkey buy missiles made in Russia at a very reasonable cost, and then buy US Patriot missile systems at 5 or more times more costly than Russias?
Answer: “Backdoors”!
Due to computer brains targeting, recognition and vulnerability to shut down by Satelites, both the Russian and American systems make each of their own products useless against themselves. So Erdogan can protect from an eventuality of US and their allied nations by using S-400.
Then to protect itself from eventuality of facing Russian air and missle attacks will use US Patriot system.
Every Nations military aircraft has national identifying signals, this is necessary because air combat can take place miles from targets visual range and helps avoid shooting down own planes.
The backdoor installed by export nation will not let their export weaponry be fired upon them, and in fact they can disable systems from satellite or air-ship telecommunications.
Case in point: At beginning of US/NATO invasion Iraq had war planes from both Russia and its invader nations, and worlds populace wondered why Iraq planes fled to its old enemy Iraq but they had a good reason, their weapon and guidance systems Haskell been turned off.
They had to fly at slower ground speeds using line of sight land marks, making them easy targets for invaders to shoot down.
Why US allies hated Scud type missles was because they had electrical mechanical guidance no digital brains, just point and shoot in general direction capability.
Ever wonder why Israel’s air force never retaliated by war planes after Iraq missile attacks? The US andnallies had no way to identify if their aircraft was friend or foe and when in doubt attack.
In Israel’s case while they buy,( are given) US newest fighter- fighter bombers they do not use US or any foreign built computers to be installed, only those of own domestic manufacture.
All export armor is in same configuration.
US supplies its defeated but now allies to continue using AK and old Soviet Yugo/Baltic Polish manufactured weapons and imported bullets because those bullets are softer tipped and will not penetrate a NATO or US grunts body armor.
Erdogan advisors on military affairs are not dummies. 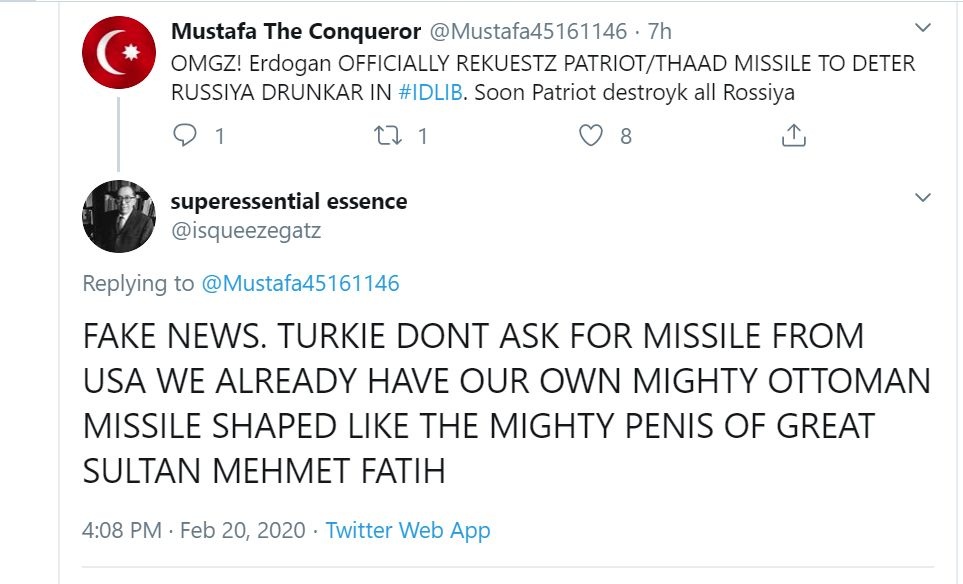 Erdogan is dreaming big, as he thinks he is indeed as were the Sultans of the Ottoman Empire, and has expanded his military into the quagmire of Libya.
He is still a member of NATO and as such is but a minor limb of US Empire, so one should always be leary in putting all his actions as being solely his undertakings.
Erdogan should be looked upon as no more than an ant climbing up an elephants leg with rape on its mind.

Erdogan should be grateful for Putin saving his ass in 2016

Turkey will win against the sleazy tsar Putin in the Battle of Idlib. Mark my words.

You can call me Al
Reply to  Constellation 2023

You are becoming boring.

You’re not first nor last to say “mark my words” and be completely wrong about everything. So if you’re wrong shall we remind you? Lol!

I think this smelly old pig is smarter than what we give him credit for. He was left to pick up the shit that Gulf states and USA left, disarm and disband them. Good luck with that. Regardless that these jihadi animals look like cross breed between Neanderthal and retarded mountain goat , they are very well trained force with loads of experience. I don’t think he want any of these sub-humans in Turkey. What is the easiest and most certain way to get rid of them. Option number 1 send them a mass to Libya, where the war is so lost for GNA, where they would either get killed or would use some of the smuggling traffickers channels to get to Italy/Europe. Option 2 Convince the bastards that you would support them with artillery and supply them with outdated equipment. Then ask them to attack head on Zerg style, whilst parading about the attack 2 weeks in advance. RuAF and ground troops would maul them down and when it’s all over you would have a hand full of these Cretins, so he can finish them off if they do not cooperate. He is smart that old fart, got to give him that, whilst it looks like he is opposing Russia and re-gain favor of the masters in USA> Standard playing both sides

This maniac Erdogan is trying to star a major war, he must be stopped.