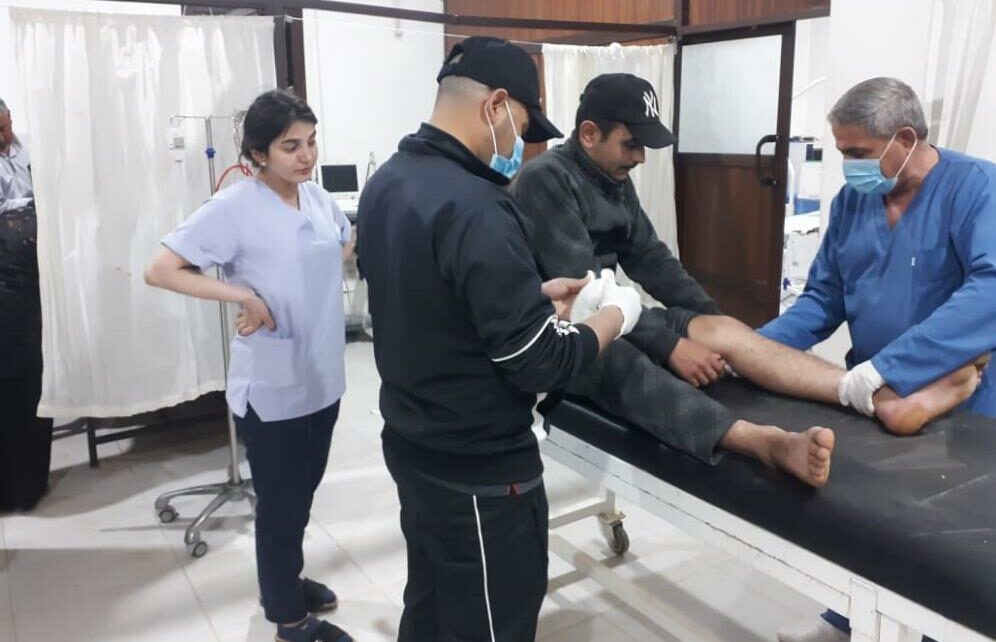 One of the Syrian soldiers wounded in the Turkish shelling. Click to see full-size image. Source: the Hawar News Agency.

On April 27, three soldiers of the Syrian Arab Army (SAA) were reportedly wounded when the Turkish military and its proxies shelled the northern countryside of Syria’s al-Hasakah.

The artillery strikes targeted areas held by the Kurdish-led Syrian Democratic Forces (SDF) in the outskirts of the town of Tell Tamer. A position of the SAA located near the village of Umm al-Kayf was hit. The position is one of many established by the army in the northeastern region in the wake of the Turkish invasion of 2019.

This was the second Turkish attack on the SAA in less than a week. On April 24, a Turkish combat drone targeted an army position near the SDF-held town of Kobane in the northeastern countryside of Aleppo. A battle tank was allegedly destroyed in the strike.

The Turkish drone strike was met with a serious response. Only a few hours after the strike, warplanes of the Russian Aerospace Forces carried out a series of airstrikes on a key position of Turkish-backed militants near the town of Burj Haydar in the northern countryside of Aleppo.

The SAA and its allies will likely respond to the new attack in order to maintain deterrence with the Turkish military and its proxies.

It’s worth noting that the Turkish military and its proxies escalated their attacks on SDF-held areas in northern and northeastern Syria in the last few months. SDF commanders have already warned that Ankara may be preparing to launch a large-scale operation in the two regions.

Iranian. Russian. hezbollah . terrorists and more terrorist groups from different terrorist countries invading Syrian land.. so turkey and Israeli they have to protect the borders.. from wild animals

unhuman idiot look.🖕 You can sit and spin on it without Vaseline so you can enjoy better how you doing so far enjoying? After you can go and jump maggot

What a troll. Iranian forces are very pro-Turkish. They hate Arabs with passion.

Wrong ..that’s why they supporting PKK ..re Christo

Erdogan and Raisi are best friends, just like with Rouhani.

Putin will not allow Syria to respond…he has no clearance from Bennett, his saviour

US support for the ZioKurd SDF is the problem. Without it the SAA and company would establish Syrian Government control over the NE and be able to negotiate a Turkish withdrawal and a revised border security agreement with the Turks where the Syrian Government keeps the ZioKurd problem in check.

Iran is also hesitant in backing either side in da NE. Don’t want to pick sides between non Sorani Kurd vs Araanb….indecision has its costs…….Otherwise this would’ve been wrapped up quick/ long ago!

Turkey hates the Kurds so couldn’t everyone agree to let Turkey at them? Iran dislikes them. They are not on the best of relationships with the rest of Syria. As the US proxies, as Israel’s proxies, nobody really likes them or only half-heartedly. Even the Us just uses them. They are like a prostituted people. Then get their pimps and clients, the US out of Syria. Grind them down and then give them time to leave, if they start to pack up within 24 hours. Send them reminders, depending on how fast they are leaving. Then set up defences against the Israeli strikes from Israel, Lebanon and the Mediterranean. Turkey should be so glad to get rid of the Kurds and be given freedom to do what it wants re the Kurds, that they leave Syria, on the promise that they can strike at the Kurds if they become problematic to Turkey. They would make a nice buffer, in between Syria and Turkey, depending on everything else, it may be worthwhile shifting them over there, onto the Turk/Syrian border.

Neutralising nukes does not necessitate using nukes though?

Fucking degarded turkish human waste. Get the fuck back to yo lovely three storeys caves, subhumans.

Anus how dare you talk like this about your master still stand carry on bending.subhumans carry on drinking your poison and f*** off and 🖕📴

Usual ‘civilization’ in ‘your’ GRUNTS .. a typical UNHUMAN GENOCIDAL BEAST. Thanks for confirmation

They are your allies mr bacha bazi.

I fucked yo gf fo 5 gz, and I vomited. Keep on doing SSRIs, An SSRI a day keeps schizophrenia away.

The rage of the bacha bazi is amusing.

I heard that yo mother is drunk named Robin and yo father is a punk named Jeremy the goblin. So there yu go face-palm foo. And I did yo sister in lo too.

Side effects of incelism you are showing

Alexander the castrated. Go and cry to your mummy, Robin the drunkard.

Alexander the Great. I am Macedonian.

Anus anus shut the fuk up

ATTILA the ANUS
Reply to  Attila